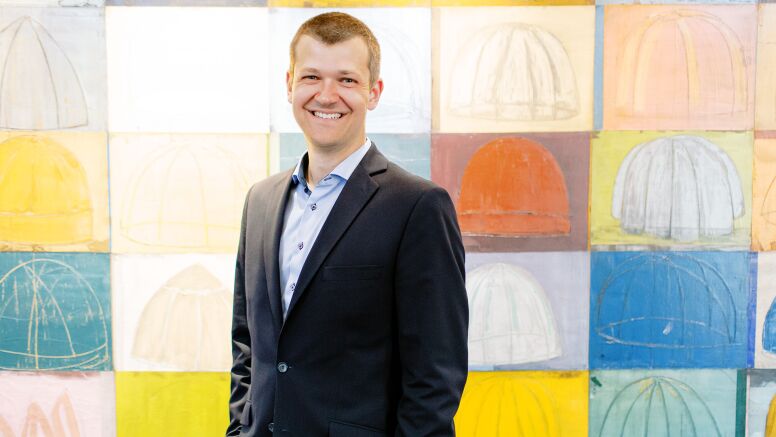 In the early days of the pandemic, professors had to figure out how to effectively continue students’ learning – and connect with them when they couldn’t be together in person. 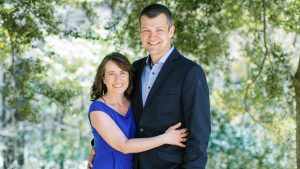 Keller had an advantage that few of his colleagues had. At the time, his wife Alina Keller (MBA ’20) was a student in the Evening MBA program. Her cohort was facing serious challenges while transitioning from in-person to online coursework, and she offered insights on their experiences to help him understand what his students were facing.

It allowed Keller to address their concerns and make the transition and learning processes smoother. He pre-recorded half the instruction in high-quality videos and offered discussion boards and interactive activities like online happy hours or – Alina’s idea – played music at the beginning of each class to lighten the mood a little.

Most importantly, he made his availability to students a top priority.

“I ramped up visibility on my end,” he says. “It’s hard to build a connection with 230 students on Zoom, when they are all blips on a screen.”

So, Keller scheduled Zoom meetings with students all day long when he was not teaching. The benefits quickly surfaced. Students were put at ease and Keller had a better experience, too.

He also connected with students through the Marketing Club. Last year, he helped members practice for case interviews. While students try their hand at cases in class, they have to take a different perspective during a job interview, he says, so he helped them polish their case assessment skills to win over potential employers.

“When you know a student, teaching is a lot more fun,” adds Keller.

With a unique approach to teaching, Keller has created a remarkable rapport with his students.

“Someone described me once as a supportive older sibling, and I liked that description,” he says. “Age wise, I’m not far from them, and I can somewhat understand what they’re going through. Professors must build a connection with their students because only then can we be effective teachers.”

To start, after Keller graduated from high school, he founded a jewelry business and sold it four years later. He went on to earn a degree in business administration and economics from Goethe University in his hometown, Frankfurt, Germany. 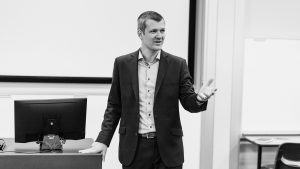 When Keller launched his academic career, he was looking for an institution that matched his interests and values. He says he found that at UNC Kenan-Flagler.

“The research I was interested in doing was a good fit with the marketing department’s practical-oriented research,” Keller says. “I identified with it, and that was important to me.”

In addition, the global perspective of School as demonstrated by offerings like the Global Elective Immersions, was alluring.

“The Research Triangle is a nice area to be in,” says Keller. “I felt it was a good fit. Being a professor at UNC Kenan-Flagler helped me extend beyond what I had done before.”

Research is a focal point in Keller’s career, and his work has been published in top journals. He studies private label marketing, retailing, branding, marketing-mix effectiveness and innovation.

The transition of private labels into true consumers-packaged goods brands is an area of special interest.

“We buy the store brands because they are cheaper knock offs of products we know,” says Keller. “But they have come a long way over the years. They keep growing.”

So, Keller pays attention to how they should innovate. For example, should they make little changes to improve on the product or should they go big and make a dramatic change, the kind that might be too assertive for a national brand? 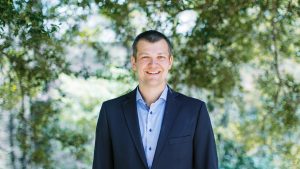 In addition, Keller looks at how brands can address discussions that are relevant and could paint industries in a bad light. For instance, he is looking at how soda companies can change their approach as consumers confront them about reducing sugar consumption. The question is how can soda companies change their brand marketing strategy to address the concerns about sugar? Soft drink manufacturers can reduce the amount of sugar in their existing recipes. Or they can opt to sell smaller cans of soda so that there is less sugar consumption in one serving, he says.

Finally, Keller has shown interest in understanding the relationship between marketing and going green. One topic he is studying is how air pollution effects purchasing decisions. Keller explains that studies have already shown a connection between increased pollution and more crime. So, he is trying to determine whether impaired cognitive effects that are a result of pollution will make people more susceptible to promotion.

The Kellers stay busy at home, too, with twins, Mika and Leon, born at UNC Hospitals in 2017. Still new to the U.S., they did not know what to expect. Keller fondly recalls one doctor, who had lived abroad and helped the couple translate their vaccination records. Welcoming their children into the world at UNC turned out better than they had imagined.

“We had a wonderful experience and are proud to have two little Tar Heels at home,” he says.

Already, they are instilling a love of travel and appreciation for a global perspective in their kids. They took the twins to Europe for the first time when they were 8 months old. “We like to think of ourselves as ‘global citizens’: My wife is Polish, I’m German, the boys have three nationalities and speak three languages. It is important for us to introduce them to different cultures, have open minds and develop cultural awareness,” he says.

Even though the pandemic put a damper on their globetrotting, the family still takes road trips to discover places in the Carolinas and Virginia.

“It’s so important to show them that there are other ways of living,” says Keller.

Spending time outdoors is also a favorite pastime. In his first two years on campus, Keller commuted by bicycle. Now, cycling is a hobby rather than a necessity.

“I can’t wait for the kids to ride their bikes,” says Keller. “I enjoy being outside exploring North Carolina’s beauty.”