Looking at both sides in search of a solution 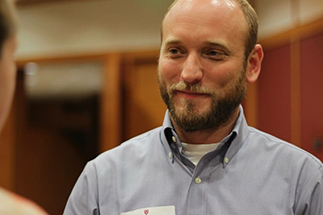 Highlighting the similarities between different sides of an issue to find practical solutions has been the common thread in the career of Jeff Mittelstadt (MBA ’07), executive director of the Center for Sustainable Enterprise and professor of the practice for strategy and entrepreneurship at UNC Kenan-Flagler.

A childhood fascination with wildlife grew into a wider interest in sustainability – the confluence of social, environmental and economic issues, and human interactions with the environment. Those interests shaped his education and career decisions.

“Everything I’ve worked on has been all about understanding people on different sides of an issue and finding a way for them to work together, or finding a solution that is amenable to different perspective,  whether that means capturing it in a new way or using compromise or finding win-win situations,” says Mittelstadt.

His interest in human behavior and understanding conflict management was sparked when he majored in psychology at Davidson College. After earning a master’s in environmental management from Duke University, concentrating on policy and economics, he worked for the U.S. Environmental Protection Agency’s Office of Inspector General as a program analyst evaluating national air quality programs.

His next step was attending the full-time MBA Program at UNC Kenan-Flagler, after which served as vice president and senior analyst at Bank of America, where he focused on green building, renewable energy and sustainable purchasing. He went on to design, start and manage a national sustainable manufacturing initiative as vice president for sustainable manufacturing at the National Council for Advanced Manufacturing. There he developed solutions with myriad stakeholders ranging from defense and aerospace manufacturers to labor unions to social justice and environmental organizations to government agencies.

When Mittelstadt realized he wanted to use his experience in conflict management and the environment to reach a broader audience he returned to UNC to earn a master’s in mass communications from the School of Media and Journalism with the goal of becoming a documentary and educational filmmaker.

He realized his goal in 2011 when he founded WildSides, a nonprofit organization that creates educational and documentary multimedia. It focuses on educational media related to human-wildlife issues, and highlights the similarities between stakeholders on different sides of a conflict. Telling the personal stories of players on multiple sides of an issue is the first step to finding a less divisive solution, he says.

“There’s a lot of conflict,” Mittelstadt says. “We’re becoming too polarized, and by concentrating on stories that people can relate to, regardless of what side of an issue they’re on, the more we’ll realize people with differing perspectives are actually pretty similar to all of us.”

While he started WildSides, he returned to Davidson as its first director of sustainability. He worked with students, faculty and a seemingly infinite number of stakeholders on social, environmental and economic sustainability issues. He hopes that his background in business and policy enables him to showcase sustainability and human-wildlife conflict like never before.

Mittelstadt has covered a wide range of environmental issues. He was part of a UNC team that created “Coal: A Love Story,” an immersive multimedia experience about the U.S.’s “complicated relationship” with coal.

WildSides won awards for “The Plight of the North Atlantic Right Whale,” a short film documenting the decline of the critically endangered species.

Its award-winning documentary “Staring Down Fate” tells the story of Chris Lucash, a federal wildlife biologist, as he faces his diagnosis with Amyotrophic Lateral Sclerosis (ALS). It also chronicles the reintroduction and decline of the red wolf, which is “staring down fate” alongside Lucash.

When Lucash was diagnosed, he immediately asked Mittelstadt to tell his story to build awareness of the human disconnect with nature. At that time Mittelstadt decided to leave Davidson College and concentrate full-time on WildSides. Filming came along with mental and emotional challenges.

“There were times, especially toward the end, where I just had to learn how to cry silently behind the camera,” Mittelstadt says.

Although the journey to found and lead a nonprofit has come with difficulties, UNC Kenan-Flagler helped pave the way for success and left a lasting impact on Mittelstadt’s career. His concentrations in sustainability and entrepreneurship gave him the confidence to start a nonprofit and not be afraid of failure in the process. Most importantly, UNC Kenan-Flagler taught him about understanding different perspectives, which is evident in the mission of WildSides.

He attributes his first job after graduation at Bank of America to the networking opportunities and programs offered by the Center for Sustainable Enterprise. The areas of business and media are constantly innovating and changing, so Mittelstadt hopes to work with UNC Kenan-Flagler students and alumni to provide opportunities and get advice on his work at WildSides.

Mittelstadt was drawn to UNC Kenan-Flagler because of its emphasis on interactions between faculty and students and opportunities to work with great leaders, which has shaped his career and is reflected in his work at WildSides.

“Finding great leaders has helped get me to where I am,” Mittelstadt says. “Being able to bounce every idea off of somebody, whether they agree with the idea or not, has shaped who I am, and those leaders, a lot of whom I was exposed to by going to Kenan-Flagler and being part of that alumni network, those great leaders are who shape each and every one of us.”