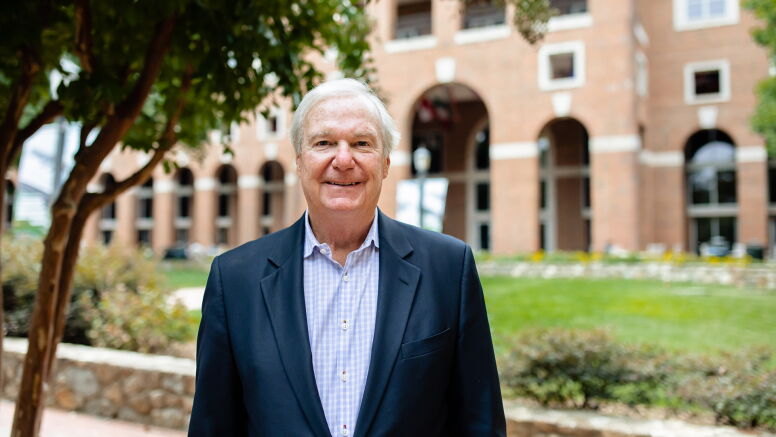 Everyone needs a Cal Atwood in their life. Bill Starling (BSBA ’75) certainly did.

When Starling met him, Atwood was in his early 50s – handsome, charming, articulate. He was a published poet who survived being shot twice in the leg by Japanese snipers during the Battle of Iwo Jima while serving in the Marine Corps during World War II. He was a genuine character, a true Renaissance man. Everyone who knew him loved him, and he would quickly become a mentor and a friend.

Atwood also happened to be the director of MBA admissions for UNC’s Business School, where Starling was enrolled as an undergraduate.

But Starling really got to know Atwood at The POETS Corner, a former French restaurant near where Granville Towers now stands. Starling bartended to pay for school and Atwood often visited.

Atwood saw potential in Starling, who had shared a desire to get an MBA. With Atwood’s urging, Starling left North Carolina for the first time in his life. Thanks to Atwood, Starling met at The POETS Corner with the director of MBA admissions at the University of Southern California, where he subsequently received an MBA scholarship.

Starling stayed in California, launching an over four-decade career in the medical device industry, mining a burgeoning Silicon Valley as a serial medical technology entrepreneur in the 1980s and 1990s beginning in his late 20s.

He has spent most of his time founding or co-founding and running innovative start-ups and lucrative venture capital partnerships within the life sciences field, from coronary angioplasty, stents, implantable defibrillators and cardiac ablation to robotic surgery, sleep apnea solutions and improved heart monitoring for serious cardiac arrhythmias. He now serves as chief executive officer Synecor, LLC, a Research Triangle Park-based generator of life science businesses that he co-founded.

Starling always been a steadfast supporter of UNC Kenan-Flagler Business School, and when he thought about new ways to help students, he thought about his own relationship with Atwood, who died at 94 in 2018.

The result is a $10 million gift from Starling and his wife, Dana, to establish and promote even more meaningful and deeper connections between UNC Kenan-Flagler students, faculty, staff and leadership.

“Bill’s generosity reflects UNC Kenan-Flagler’s unparalleled culture of compassion and support which can be a transformative experience for our students,” says Jennifer Conrad, interim dean. “It’s not just the knowledge gained from the classroom that makes us stand out. It’s the relationships fostered between students, faculty and staff that are truly remarkable.”

Atwood wasn’t just in charge of MBA admissions. He touched students’ live. He frequently helped graduates find just the right job. He knew that when Starling’s father died during his last year of college, he needed someone and unhesitatingly became a father figure. 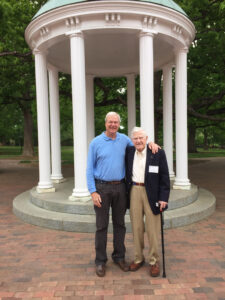 “There was nobody more beloved than Cal. Had it not been for him, I never would’ve been anywhere close to being able to give back financially,” says Starling. “It wasn’t that he gave me money. What he did was set me on the path to success.”

Like most who come to Carolina, Starling never fully left it behind. He remains actively involved in the life of the Business School, including guest lecturing to students on entrepreneurism, participating in the Venture Capital Investment Competition and serving on the UNC Kenan-Flagler Board of Advisors. He maintains a home in Chapel Hill. Among his prized possessions is a note handwritten written in Carolina blue by legendary men’s basketball coach Dean Smith congratulating him on his success in California. He comes back to the state often to play golf with the guys he grew up with in Raleigh.

Starling is also chairman of Carolina Research Ventures, a $20 million-plus venture capital fund focusing on UNC Life Sciences intellectual property, the only source of “seed” capital on campus and a model to foster University innovation across the U.S.

And he believes in the purposeful work across campus. In addition to their generous gift to UNC Kenan-Flagler, the Starlings committed $25 million to the UNC School of Medicine’s Department of Psychiatry, establishing the UNC Suicide Prevention Institute.

Like his Business School gift, it’s personal. The Starlings lost their sons, Tyler and Gregory, to suicide. The institute’s mission of better understanding mental illness and improving treatments reflects the importance of establishing meaningful, rather than simply transactional, relationships between college students, faculty and staff.

“There are so many stories I’ve heard, dozens and dozens of emails and text messages and calls,” says Starling. “The common theme is that so many people have mental health challenges in their lives. Many who know me say what I didn’t know is that their children, parents, siblings, uncles, aunts or spouses struggle with mental illness. We’re making a big effort to make a huge difference here on campus. Carolina can be a pioneer.”

Both gifts further cement Starling’s Carolina legacy. In 2016, he was honored with the UNC Kenan-Flagler Leadership Award, recognizing his service to the School and his career achievements. Like Atwood, he has a fellowship in his name, the William Starling Life Sciences MBA Fellowship, designed to encourage those interested in biomedical engineering and science to pursue an MBA.

During his commencement address to the MBA Class of 2008, Starling told graduates that what’s most important in life is not a long career or money or success – it’s family and close friendships.

His gift is another reminder of the value of having someone there in good and bad times.

“I think fostering these relationships gives people a chance to lean on somebody if they need to. It encourages relationships that would not have been possible before,” says Starling. “That’s hopefully us doing our little part, because sometimes people just don’t have anybody to talk to.”