Launching the next generation of entrepreneurs 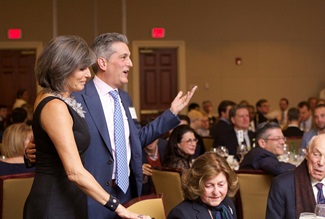 Serving others was a non-negotiable for Eric Becker when he was growing up in Baltimore, Maryland. On any given week, his mom and dad could be found helping others in their community – from teaching speech lessons to inner-city school kids to providing scholarships for minority students.

That spirit led Becker – a successful businessman and entrepreneur who now calls Chicago home – toward a life of philanthropy and mentorship. His mission is simple: to honor his own success by helping others in their entrepreneurial journey.

And that’s exactly what he’s done.

Becker funds and mentors entrepreneurs through his private equity fund, Sterling Partners, and impact investment firm, Caretta Partners. He also co-chairs Chicago Ideas Week – an annual event that draws innovators from around the world – and volunteers with Karma for Cara, a nonprofit founded in memory of his daughter.

But at Carolina, Becker is perhaps best known for his role in founding Launch Chapel Hill – the brainchild of his son, Greg (UNC ’12) – and his service as a mentor in UNC Kenan-Flagler’s Adams Apprenticeship Program, both of which fueled UNC’s exploding entrepreneurial ecosystem.

His efforts earned Becker the honor of being the first-ever recipient of the Adams Entrepreneurial Pioneer Award. The award recognizes a person who has achieved career-long success as an entrepreneur and, most importantly, demonstrated their service, commitment and dedication to supporting the next generation of entrepreneurs.

“When we thought about potential people to receive this award, it was amazing how one name came to mind: Eric Becker,” says Ted Zoller, director of the UNC Kenan-Flagler Center for Entrepreneurial Studies and the T.W. Lewis Clinical Associate Professor of Strategy and Entrepreneurship. “He’s a person that inspires us all.”

Becker accepted the award at a celebration kicking off the inaugural Adams Apprenticeship Forum, a daylong event for advisors and apprentices.

The Adams Apprenticeship is a game-changer for students serious about forging careers as entrepreneurs. Established in 2014 thanks to the generosity of the John Adams family – John Adams Sr., John Adams Jr., Vicki Adams and JQ Adams (BSBA ’14) – and the John and Patricia Adams Family Foundation, the program provides an elite group of UNC students with two years of entrepreneurship training and programs, followed by lifelong support from a network of alumni and UNC-affiliated mentors around the world.

The program also provides apprentices access to a network of entrepreneurial mentors around the world. Every mentor has committed to giving an hour of their time to any apprentice who asks. These advisors “provide connections and ‘big bricks’ to help take entrepreneurs to the next level,” says Zoller, who expects the Adams Apprenticeship program will create a “flywheel” effect in which apprentices will eventually serve as advisors for new apprentices and for each other. 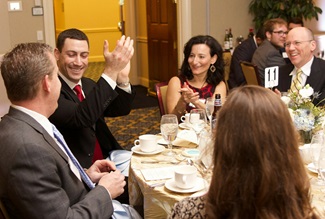 The Adams Apprentices are “some of the most inspirational people I’ve ever had the chance to work with,” says Zoller. “They are what keep me alive every day.”

Becker, who is an Adams Advisor, believes the program has the potential “to become a national example of how we can all help others to follow in our entrepreneurial footsteps and achieve their own dreams.”

And he would know.

Becker’s entrepreneurial journey began as a business student at the University of Chicago, where he wrote his first business plan in his dorm room. But his biggest lessons came from mentors.

He interned with Chicago real estate and restaurant entrepreneur Larry Levy, who taught him an important lesson about being resourceful. Levy tasked Becker with finding a particular site map buried in a sea of rolled up maps and plans. When Becker came up empty-handed, Levy told him he needed to find the map – even if it meant calling Rand McNally or an architect to get a copy.

“The lesson has been learned – I need to bring results and answers, not more questions,” says Becker.

Years later, Becker asked Levy to introduce him to an important business contact. Instead of a connection, Levy shared some words of wisdom: Just call. You should be comfortable calling anyone, he said.

Becker carried these lessons with him throughout his career. Now, he’s eager to give back and help the next generation of entrepreneurs achieve success.

His passion is matched by thoughtfulness in the biggest sense of the world, says his brother Doug, who spoke at the awards ceremony. “Everything he does is thoughtful. He’s introspective in a world where most people put one foot in front of the other.”

Becker’s colleagues, mentors and mentees agree. In a tribute video shown at the awards ceremony, they described Becker as a “world-class entrepreneur” with a “generosity of spirit” who lives his values and “wants to have impact in his career by supporting others to [help them] realize their dreams.” And he’s never too busy to help a friend or colleague, they add. 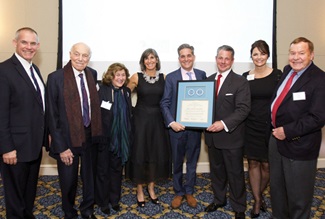 With his “inquisitive mind and insatiable appetite to learn everything,” Becker built a reputation as a leader who takes ideas and melds them together to “build something really meaningful.”

That’s precisely what he did at Carolina. Inspired by his son Greg’s idea to create a startup accelerator in Chapel Hill, Becker championed the initiative and encouraged his wife Jill and brother Doug to get involved. Launch Chapel Hill – a partnership between UNC Kenan-Flagler, the Chancellor’s Innovative Carolina initiative, the Town of Chapel Hill, Orange County and the Becker family – opened in 2013 and has helped dozens of student and community startups launch, grow and raise capital. In 2015, Launch earned UNC recognition for having the No. 4 best performing university accelerator in North America.

As an Adams Advisor, Becker hopes to inspire his apprentices to pay it forward once they have achieved their own success.

“When you become parents, mentor your children,” he advised attendees. “And when you have the opportunity to mentor others in business, give back by helping them to achieve their dreams.”