Investing in the next generation 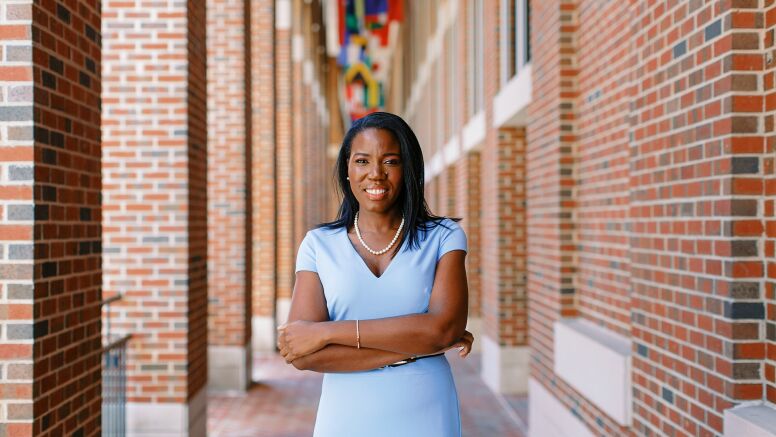 Je’nique Harewood (MBA ’21) is the embodiment of an empathetic leader.

Passionate about diversity and inclusion, she made it her mission to help increase the number of underrepresented minorities at UNC Kenan-Flagler, leading with an important and valued voice in the community.

Her commitment to the community and efforts to increase diversity at the School were recognized at her May 2021 graduation: She received the Frank Hawkins Kenan Award, which honors commitment to excellence, honor and leadership.

Harewood did not expect the recognition. “I wasn’t prepared for that scene,” she says. “It was humbling and heartwarming.”

That wasn’t the first time the community recognized her leadership. The Consortium honored her with the Leslie Adkins Endowed Scholarship, a prestigious scholarship based on moral character, commitment to scholarship and volunteerism, and service to humanity.

Harewood was a leader in the classroom, in extracurricular community work, and as a role model for her peers, says Kristopher Keller, assistant professor of marketing

A Consortium Fellow, she was VP of communication and technology for the 2020-21 Consortium Leadership Team at UNC Kenan-Flagler; a Kenan Scholar, a premier research opportunity; a Marketing Club member; a Business Communications Center consultant; and a teaching assistant.

“I first noticed her ability to lead empathetically when we discussed a controversial topic in the classroom,” Keller says. “The discussion was about to get heated when Je’nique both verbally and non-verbally achieved three things: She moved the discussion forward, stood her ground, and pushed other members to take a more objective, less feisty stance. How did she do that? Je’nique not only argues intellectually but she also ‘feels the room’ and understands where others are coming from.”

Like all great leaders, Harewood steps up and acts when confronted with a challenge. When she noticed she had too few Black classmates, she did something about it. 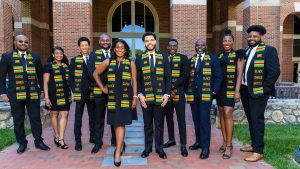 She and Rhian Carreker-Ford (MBA ’21) co-founded the Black Business Student Association (BBSA) in 2020 and served as co-presidents. The group educated potential students about the benefits and opportunities that come with earning an MBA degree, and mentored first-year students to ensure they could have positive experiences, achieve success and become the next spokespeople for the program.

“We wanted minority students to see faces that look like theirs,” says Harewood, “and support the unique challenges Black students face in business school and the importance of having a support system to help us navigate. We found it necessary to build a community that would serve as a source of support through both the difficult and rewarding moments we would experience.”

Not long after founding BBSA, COVID-19 changed everything. “We were faced with a rapid conversion to online learning and the racial reckoning facing our country,” Harewood says. “We had to lead in a pandemic and ensure that our members and community felt safe and supported. The confluence of those events gave me the ultimate crash course in crisis leadership and navigating through turbulent times.”

She and Carreker-Ford continued to grow BBSA organization through corporate partnerships and building membership. “When we turned a year old in February 2021 we could see the impact we made in our classmates’ lives,” she says. “I am proud of the legacy that we created for each other, but most importantly the impact it will have for all Black students entering the halls of UNC Kenan-Flagler in the future. Change is sometimes incremental and there’s still work to be done, but the School is moving in the right direction.”

As the pandemic continued, so did her online studies. “It was hard,” says Harewood. “The bond we formed in those first few months frayed a bit. Overall, the School did a good job of helping us come together and support each other. We lived in a Zoom world. It’s not the experience we hoped for, but I’m a believer that you make the best of any situation you’re thrust into.”

The efforts of the faculty, in particular, motivated her to help make the campus a better place.

“The professors really care for you in personal ways,” says Harewood. “They support you in any way they can. Chapel Hill is a wonderful, small, loving and nice community.”

Finding a match in UNC Kenan-Flagler

When Harewood was deciding on business schools, UNC Kenan-Flagler became the obvious choice. She knew friends and colleagues attending programs where classes were big and they didn’t receive much individual attention. That wasn’t for her.

“I want to connect with people and know them on a personal level,” says Harewood. “I was looking for a school focused on community building.”

After talking to UNC Kenan-Flagler students, she committed to the MBA program. There she cultivated constructive, respectful dialogue about differences in opinion. “Challenging each other’s thought processes was important to my educational experience,” she says. “I sought an environment where I was not afraid to ask questions and be inquisitive about teachings or concepts I was unfamiliar with.

“At UNC Kenan-Flagler, we exhibit a healthy amount of competition amongst each other that keeps us sharp and competitive outside of the classroom but not destructive to our academic pursuits and friendships that we’ve formed.”

“All the things I wanted to accomplish, I did,” she says. “The School nurtured me so I could achieve my goals.”

Stepping into the future

Born and raised in Trinidad and Tobago, Harewood’s decision to pursue a business career was influenced by her grandfather. “He always encouraged me to seek knowledge, dream big and never stop learning. He was the architect behind our entire family obtaining multiple degrees and having successful and rewarding careers.” 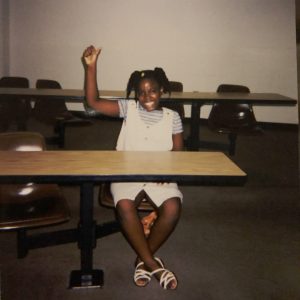 A young Harewood at Howard University

When Harewood was 8, her mother earned her business degree at Howard University, and then her MBA at John’s Hopkins University. “She wanted to be a role model and inspiration for me, and show me the opportunities are endless,” says Harewood.

“I saw my mom use her business degree to pivot into numerous exciting roles over the years and I wanted to have a career where I could do the same. I look forward to continuing my career with the tools I’ve learned in business school and living out the dreams my mom and grandfather had for me.”

Harewood came to UNC Kenan-Flagler wanting to change her career track from finance to marketing.

She spent the early part of her career working with the nonprofit organizations before moving to Morgan Stanley Wealth Management, where she helped support development of the firm’s first mobile banking application and implemented system enhancements across the division. She developed an interest in marketing while working on projects that incorporated product marketing.

“I hadn’t been aware of careers within product marketing and did research. I quickly realized that many of those roles still incorporated the quantitative analysis, such as data analytics and P&L management, that I wanted to maintain in any new role. 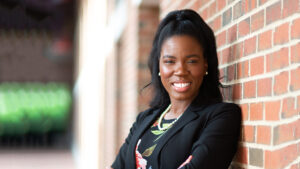 “The first year of business school, I had to work really hard, memorizing marketing frameworks and did several interviews until I found a company that had the right role for me. Luckily, I was successful in landing an amazing role with Verizon Business Group that incorporated the quantitative proficiency I desired and also has a robust marketing division where I could build my marketing acumen.”

Her online summer internship program with Verizon led to a full-time position as a marketing manager with the company in the Washington, D.C., metro area.

At UNC Kenan-Flagler she focused on both marketing and data analytics. The ability to take consumer data and convert it to increase sales and develop a long-term strategy helped her land the full-time role, she says.

“The faculty created an environment where I was challenged to grow academically and learn from my peers,” Harewood says. “I developed a sense of fearlessness and confidence outside of the classroom as I know I’m prepared to represent myself and UNC Kenan-Flagler because of the support I received in the classroom.”

And Harewood’s commitment to diversity and inclusion isn’t finished.

“Increasing diversity and inclusion is not a job,” she says. “It’s a lifestyle. It will always be at the center of my work.”