Skip to content Skip to Programs Navigation
Innovation in the U.S. Army and at Carolina

Innovation in the U.S. Army and at Carolina 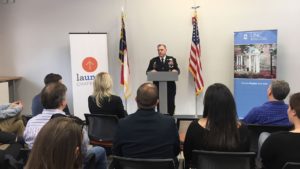 General Mark A. Milley is constantly seeking out innovation. “I’m the head of an organization that was founded on the 14th of June in 1775,” said Milley, Chief of Staff of the U.S. Army, during a visit to Launch Chapel Hill. “We have been around a while but have changed a lot over the years. If you don’t adapt quickly, your organization becomes irrelevant.”

Milley is inspired by the work of entrepreneurs, such as those served by Launch Chapel Hill and the UNC Kenan-Flagler Center for Entrepreneurial Studies.

“The Army is a big organization – 1.2 million soldiers, serving in 140 countries around the world – providing a product called the safety and security of the American people,” he says. “In order to provide that, we have to adapt to the changing operational environment and remain on the cutting edge. You do that by getting exposure to innovators.”

“I seek out areas of innovation around the country, in places like the Triangle, Silicon Valley and Route 128 (in Massachusetts),” he says.

Reflecting on a meeting with Elon Musk, founder and CEO of SpaceX and co-founder and CEO of Tesla, he says, “I wanted to engage him and get his thinking on emerging technology, artificial intelligence and electric ways of powering vehicles which I think will have utility in the military domain. Musk has a brilliant mind and looks at the world differently than I might. He says that in order to succeed, you have to have a high threshold for pain and failure.”

“We have to get over the idea that failure is bad,” says Milley. “Most successful business people have failed many, many times.” He encourages entrepreneurs to “dream big and go for it; don’t take no for an answer. To be successful, you need to try things, fail and then pick yourself up by your bootstraps and try again.” 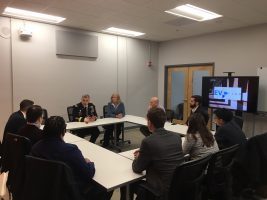 Talking with student members of UNC Kenan-Flagler’s Entrepreneurship and Venture Capital (EVC) Club, Milley advises that all organizations have both formal and informal leaders. “You have to be familiar with both,” he says. “Informal leaders can be quite effective in making things happen and getting results while formal leaders have rank and power to make things happen. Be sure to work both channels.”

He encourages speculative critical thinking skills. “Don’t accept things at face value; always ask why,” says Milley. “If human beings never asked why, we wouldn’t have advanced past the Stone Age. And have an inquisitive mind; be broad ranging in your lines of inquiry.”

Milley believes that communication is key to success. “The handmaiden of transparency is to be candid,” he says. “You may be wrong but you should at least tell the truth the way you see it.”

Matt Dallhoff (MBA ’18), EVC president, is inspired by Milley’s leadership and vision. “He has put such an emphasis on innovation and looking at the future of the army,” says Dallhoff. “To hear how General Milley employs innovation in an organization as large as the Army is uniquely valuable for our club members looking to launch a venture or join a growing startup.”