Inclusion of all kinds is important to Libby Parsons 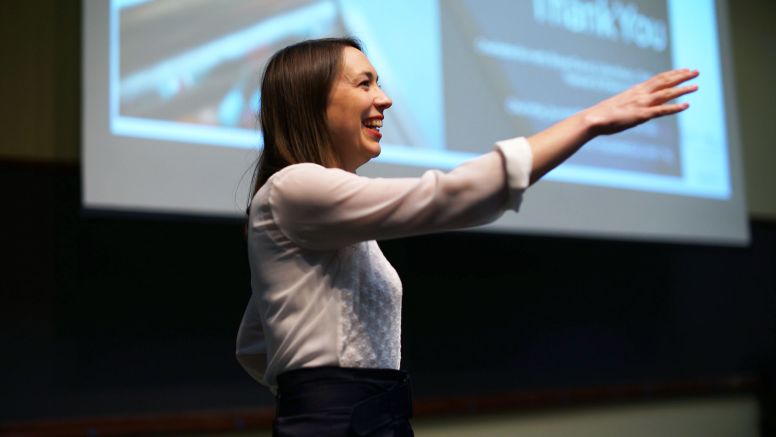 Libby Parsons (MBA ’19) represents the next generation of business leaders who want to ensure their work has impact on the greater society. She plans to apply her business skills to the triple bottom line to change the world.

What motivates Parsons the most is tackling income inequality. “The economy has become less inclusive,” says Parsons. “The wealth gap is increasing at a faster and faster rate. I believe corporations can be a part of the solution.”

One way to make that change is through impact investing, which generates beneficial social or environmental impact while earning financial returns, and Parsons has raised its profile at UNC Kenan-Flagler.

Parsons worked in the public sector before she earned her MBA.  She raised funds for Accion, a global nonprofit microlender focused on financial inclusion. She also worked as a senior program manager in capital access for the New York City Department of Small Business Services, where she designed and launched two $10 million funds to help minority- and women-owned businesses. In both roles she focused on helping small businesses achieve success.

She had worked in finance for her entire career, but didn’t have an academic foundation in finance on which she could build. And colleagues from the corporate sector were getting hired at a more executive level. Her mentor, who came from investment banking, encouraged her to continue her education, and she realized corporate finance experience could help her develop a more well-rounded perspective.

Next, she had to find the right business school. She had been in New York for several years and wanted to be in the southeast, closer to family in Virginia. She discovered that UNC Kenan-Flagler’s full-time MBA Program was known for getting students with no experience in finance work-ready, and has ties to both the investment banking and nonprofit communities.

And there was a bonus to choosing UNC Kenan-Flagler that Parsons later recognized more fully as a student.

“I had a sense UNC had this community feeling when I was applying,” says Parsons, “but I didn’t really see it until I was here. Although people are ambitious, they always choose to work as a team.”

One of the best examples of this camaraderie surfaced when Parsons was leading the MBA Impact Investing Network & Training (MIINT) competition at UNC and selecting a team to compete at the Wharton School at the University of Pennsylvania. After marketing the program to students, four teams from UNC Kenan-Flagler were interested and competed to determine which team would travel to Wharton. The winning team received enthusiastic support from the others, who were genuinely happy for them.

As a leader in the School’s Net Impact chapter, Parsons served as vice president of Impact Investing. Her biggest undertaking was organizing UNC Kenan-Flagler’s 13th annual Invest for Impact competition.

“The Invest for Impact competition is a great opportunity for students who want to experience impact investing but can’t be as committed as you have to be for MIINT, which is a six month program,” says Parsons.

Social enterprises – Regen, Mojo Medical, D-manna and a seaweed agricultural company – shared their pitch decks at the event. Teams – fielded by Chicago, Duke, Oxford, Hong Kong University of Science and Technology, Bard, Manchester and UNC Kenan-Flagler – had one week to prepare a memo and recommendations for the organization viewed as strongest.

Each team presented a 10-minute pitch and responded to judges’ questions. The 2019 event was a success, says Parsons, and the UNC team took first place.

The MIINT and Invest for Impact competitions are the best ways to network and become familiar with the impact investing community because the industry does not have a traditional recruiting path at top business schools yet, says Parsons. A few classmates participated in career treks organized by MIINT during the 2018-19 academic year.

Inclusion of all kinds is import to Parsons. She wasn’t just a leader in Net Impact – earning the 2019 MBA Net Impact Sustainability Award –and campus leader for MIINT. She also served as vice president of community building for the Pride Club and vice president of integration for the International Business Association.

“Kenan-Flagler has a smaller class than many schools, so everyone here is very involved, often in more than one club or initiative,” says Parsons. “My classmates really care about making Kenan-Flagler an inclusive and thriving community.”

As a Forté Fellow, Parsons received scholarship and support from the Forté Foundation, which aims to increase the number of women earning an MBA. When she was considering business school, Parsons dreaded taking the GMAT, fearing she lacked the required quantitative skills. “It was a huge deterrent for me,” she says. “I had to relearn math myself.”

And she bets she wasn’t alone. “Girls are seldom encouraged to pursue math in school,” she adds, “I know I wasn’t.” This often results in a lack of confidence in these skills among women.

To attract more women, business schools need to catch up and find ways to combat this educational shortcoming, says Parsons. “Thankfully, more women are taking math as undergraduates.” In other words, change is coming. The MBA Program continues to evolve as more diverse classes with interest in more than making money arrive on campus. Parsons epitomizes this new wave.

Impact investing isn’t her only interest. Back in New York, she had a pop-up taco shop and was known for her taco parties. Originally from San Antonio, Texas, Parsons likes to put her own spin on Tex-Mex classics.

Parsons accepted a full-time position in investment banking in the institutions group at Bank of America Merrill Lynch – where she had a summer internship – in New York. She is eager to get experience in general financial services and prepare for the future, when she hopes to work toward financial inclusion.

And while Parsons is excited to return to New York City, she will miss the North Carolina lifestyle of evenings talking on the front porch, weekend trips to Asheville and BLTs from Merritt’s.