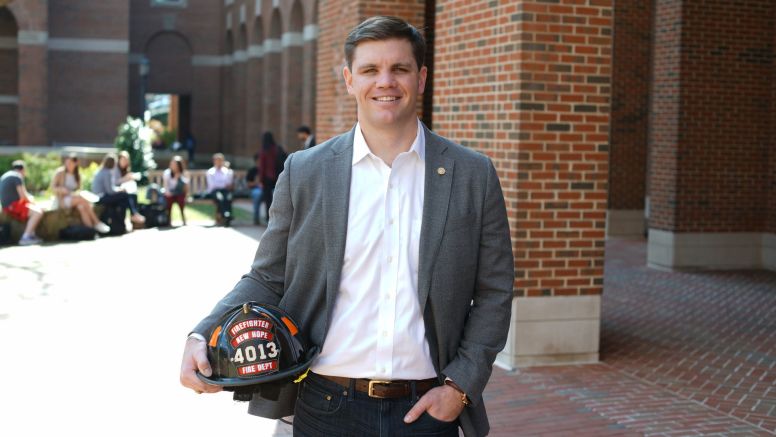 The transition from the military to business school was a whirlwind for Michael Burris (MBA ’19).

Within less than a month’s span, he served his last day in the U.S. Navy, married the love of his life, moved from the West Coast to the East Coast, and started his studies in the full-time MBA Program at UNC Kenan-Flagler.

He drew on support from the other veterans on campus to successfully transition from serving seven years in the military to getting back into the groove of being a student. It didn’t happen overnight, but it did happen.

“Come Mod 2, I was rocking and rolling,” says Burris, who has continued to develop his leadership skills while in the program.

Today, he is president of the UNC Kenan-Flagler Veterans Association. His mission is to develop the group’s reputation and create the greatest impact of any veterans club at top business schools. His devotion to the organization originates with his understanding of the School’s culture.

What drew Burris to UNC Kenan-Flagler was its collaborative culture. He didn’t want to attend a cutthroat business school, where people were focused primarily on their own success.

“I saw a community at UNC Kenan-Flagler where the students are vested in each other’s success,” says Burris.

The Veterans Club attracted Burris most of all. The comradery and ability to share stories with those who could relate was cathartic, he says. Over time, nostalgia and tension from the transition faded away. And as even more time passed, Burris better understood the elements necessary to succeed as a student.

Now, Burris’ attention is on helping fellow vets have an easier time when they begin the MBA Program and consider their future career away from the military. The Veterans Club has developed a mentorship program, in which every first-year student member is assigned to a second-year MBA student in the club. Members learn who their mentor will be two months before classes begin.

Mentors provide first-year students with advice about where to live, what classes to take, how to stay organized and more. Talking to someone who has already been through it and has the experience of transitioning
from the military makes the return to school easier, he says. So far, the mentorship program has exceeded expectations.

“The first years have had incredible academic and internship recruiting success that I believe the mentorship program has contributed to,” says Burris.

While the veterans lean on each other, they also integrate with the rest of the UNC Kenan-Flagler community by hosting a variety of events.

“We aim to be one of the social hubs of the Business School,” says Burris. “We throw a lot of great social events.”

Having a good time and supporting one another, however, are not the only responsibilities of the Veterans Club. By charging admission for some social events and conducting outside fundraising, club members have raised over $10,000 for various veterans’ charities.

They also bring in speakers, including a Medal of Honor recipient and the U.S. Army Chief of Staff, to both expose the entire campus to military leadership and showcase UNC Kenan-Flagler’s support of the armed forces.

A unique initiative Burris took up as president was creating a coin for the club. Those in the military have a tradition of trading “challenge coins” as a sign of respect. Burris remembers trading coins with various units when he was still in the military, including the Royal Korean Navy SEALs. With the Veterans Club’s coin, Burris aims to create tradition and publicity for the organization. The group has presented nearly 400 coins to people they have encountered in the academic, business, military and governmental spheres.

While studying and pursuing his career, Burris also serves as a volunteer firefighter for New Hope Fire Department in Orange County, North Carolina. His family has a tradition of serving, both his grandfather and brother are volunteer firefighters. Burris enjoys being a part of the community and needed an “adrenaline rush after leaving the Navy.”

Clearly, a piece of Burris’ heart will always belong to the military, which he significantly credits for shaping his character. But now he’s looking forward to graduation in the spring. His focus is real estate development. During the summer, he interned at Trammel Crow Residential, which allowed him to take part in developing apartments in Atlanta.

During his internship, he noticed transferable skills from the military that could help him stand out in the complex world of real estate development. For starters, in the military he had been responsible for overseeing 40 people and $50 million worth of equipment while he was the Officer in Charge of a Specialized Small Boat Team. During that time, he had to unify people from diverse backgrounds, from individuals escaping urban gang life to immigrants serving their new nation.

“Being able to create teams of people from diverse backgrounds is a great asset for any company to have in its arsenal”, says Burris. “Creating and managing relationships with diverse groups of people and institutions is critical in real estate development.”

Military veterans, he says, have much to offer as MBA students and to the business world at large, and he hopes more veterans find their way to UNC Kenan-Flagler.