Using his degree as a force for good 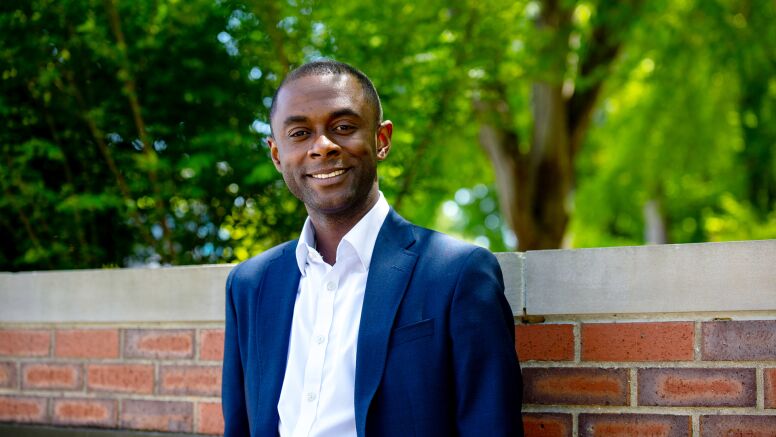 He was just 16 when he launched his first magazine and within four years, that grew into a national magazine, a newspaper, a radio show and a production company.

But at 20 years old, everything changed for the young businessman.

On Jan. 12, 2010, Etienne was in a four-story concrete building when a 7.0 magnitude earthquake shook Haiti. He was left hanging upside down for eight hours in the collapsed building.

“That’s when I realized I wasn’t as powerful as I thought I was. I was dying, and there was nothing I could do about it, and I’m not taking anything I did with me,” he says. “I decided if I survive this, I’m going to shut down everything and I’m going to figure out how I live a life to serve people and bring glory to God.”

Etienne would eventually lose his left leg, but in recovery, he gained a new mindset of using his business acumen to help the people of Haiti. He did this by collecting 40,000 eyeglasses for Haitians, helping install roofs on more than 700 homes following Hurricane Matthew and building a children’s center for Coteaux.

Eager to make an even more significant impact, Etienne made his way to UNC Kenan-Flagler Business School two years ago to earn his MBA. The Tar Heel graduated on May 14, 2022, and is taking his mission to the next level.

Before the earthquake, Etienne says he was chasing money and fame, and he was acquiring it quickly. But as he waited for help underneath that concrete building, the success felt empty. He knew it was time to move on, and inspiration on what to do next wasn’t far off.

After his eight agonizing hours hanging upside down, Etienne was rescued, placed in a wheelbarrow and pushed for a day to the closest hospital. It was another week before he was seen by a doctor.

Doctors from other countries began to arrive in Haiti to provide additional care, and they sparked Etienne’s interest in medical school. After coming to the U.S. to receive a prosthetic leg, he decided to stay to attend college to pursue medical school. He moved to New York City but was commuting three hours by bus to a community college in New Jersey. Stretched financially, he spent most of the year crashing on friends’ couches but kept his grades up to help him land a scholarship to Anderson College in Indiana.

More established in the U.S., Etienne began to make good on the promise to find ways to serve others.

Etienne made regular trips home to Haiti despite struggling to support himself financially through college. On one of those trips, he noticed a solvable issue in his community.

“I realized there was no eye doctor. I thought I had to do something about this,” he says. “On the way back, on the plane, I’m Googling ‘eyeglasses’ and ‘eye care.’ Within a week, I went back to my church to tell them about the project.”

His idea was to take advantage of the eyeglasses that Americans threw away when they received a new prescription or upgraded. Etienne would then clean and repair those glasses and ship them to Haiti for residents. Haitians would walk nearly seven hours to pick up a pair.

The enterprise, which grew to include partnerships with optometrists who would travel to Haiti, collected more than 40,000 pairs of glasses and screened 6,000 patients through mobile clinics in two years.

Etienne realized that his business skills were his way of giving back, and after graduating from Anderson College in 2016, he returned to Haiti to serve as a director of a charity. But within a few months of being back in Port Salut, Hurricane Matthew hit and destroyed a large portion of his community.

Etienne raised $10,000 for relief efforts within 24 hours of the storm. He then left the charity to launch Rebuilding Haiti — a nonprofit designed to support and rebuild Haitian communities.

While homes were being rebuilt using mud and recycled lumber, roofing needed to be imported to Haiti and was far more costly. Etienne and Rebuilding Haiti told the community that they’d install the roofs if residents could rebuild their homes. The organization added roofs to more than 700 homes in the aftermath of the storm while also providing 100,000 meals, installing water purification systems and helping rebuild schools and churches.

Though Etienne was proud of the work he was able to do for the adults in the community, he wanted to begin solving challenges for the next generation. He worked to build a children’s center that has served hundreds of children in Coteaux by providing regular meals, tutoring and trade skill courses.

“The children are the future. They’re the chief dreamers and their dreams were broken,” he said. “That’s when I decided that I was going to take everything I saved to build this center.”

Through Rebuilding Haiti and the children’s center, Etienne’s profile began to rise in Haiti. He worked with politicians to advocate for stronger policies between Haiti and the U.S. government. He also realized he needed more skills to make a larger impact.

“I realized that I needed an MBA,” Etienne says. “The MBA was going to provide me the skills and credentials I need to measure up to these opportunities.”

A tool for good

When he decided he wanted to go back to school, coming to UNC-Chapel Hill felt like a no-brainer, Etienne says.

He studied investment banking in the Full-Time MBA Program at UNC Kenan-Flagler with aspirations of building an impact investment fund that could provide microloans for businesses in some of the world’s poorest countries. With support and mentorship from faculty members, he landed an internship with Bank of America’s investment banking program in New York City during the summer of 2021.

Through his experiences at UNC Kenan-Flagler and Bank of America, he began to see a new way to make an impact. Instead of working on the ground in communities, he could provide the necessary financial support for those already performing the work and serve as an advocate for those efforts in the financial world.

He now has an opportunity to put that idea into action as an investment banker at Bank of America in New York. With his MBA and new position, Etienne plans to continue building a legacy of helping others.