Forging a new path for leadership 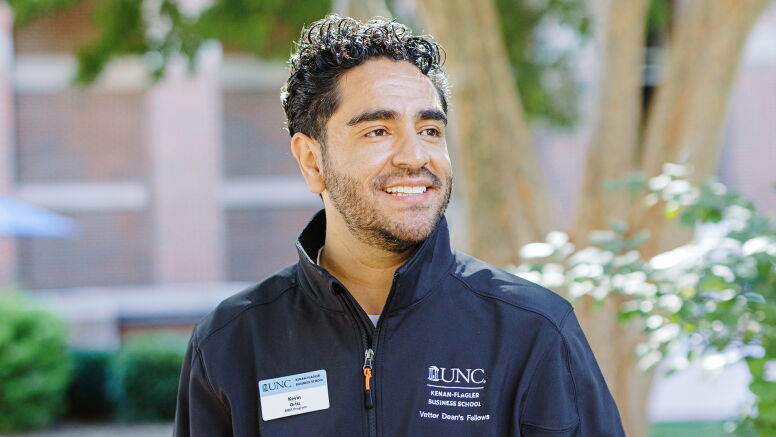 When Kevin Ortiz (MBA ’23) was 5, his father made the tough decision to migrate to the United States.

When he was 12, Ortiz left Lagos de Moreno, Mexico, the only home he had ever known, with his mother, sister and brother, to join him.

For two days and two nights, they hiked north across the border and through the Arizona desert. Their travels ended in Orlando, Florida, where Ortiz’s father had established a new life with greater opportunities for their family.

Ortiz learned English and attended middle and high school as an undocumented immigrant. In high school, he took Advanced Placement classes, earned 33 college credits through dual-enrollment courses, and then was denied in-state college tuition because he could not show proof of legal permanent residency.

He waited for his deferred dream – an opportunity to attend college. Four years after high school graduation, the Deferred Action for Childhood Arrivals (DACA) program launched and Ortiz was officially authorized to work.

He got a Social Security number and paid his way through community college with his personal savings. Private scholarships from the Hispanic Heritage Scholarship Fund of Orlando and TheDream.US allowed him to attend the University of Central Florida. In 2017, he became the first member of his family to graduate from college.

And now, almost 20 years after he first left Mexico, Ortiz is earning his MBA from UNC Kenan-Flagler Business School while on a full scholarship.

He’s also leading with purpose. At UNC Kenan-Flagler, Ortiz is a Vetter Dean’s Fellow and is president of the Latin American Business Association. In July 2022, he co-launched Líder, a program designed to build and inspire the next generation of Latinx leaders in North Carolina.

“I am Mexican. I crossed the border when I was 12. I am part of a mixed-status family. I don’t want to hide that,” says Ortiz. I take pride in the fact that my parents were courageous enough to come here, to dream something for their kids.

“But with all the barriers you start to think that maybe it’s a dream that is not really all that attainable. But now here I am.” 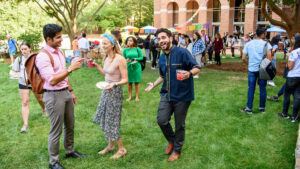 Líder, Spanish for “leader,” is the program Ortiz knew he wanted to start when he came to Carolina. It’s a partnership with UNC’s Carolina Latinx Center with support from UNC Kenan-Flagler’s Diversity, Equity and Inclusion (DEI) Initiative.

“As a student you feel it when you’re the only one who speaks Spanish or say you are from Mexico. There’s sometimes a sense of being the only one here. You doubt your ability to belong in this space,” says Ortiz. “I want students to see strength in who they are. I want them to feel that their perspective is welcome and needed.”

Ortiz showed the students that his new home at UNC Kenan-Flagler could be home for them, too.

“Kevin is a brilliant leader who has taught me the value of setting time aside to help one’s own community,” says José Camacho (BSBA ’24), a Líder Fellow. “His genuine passion for helping others has inspired me to help those who have similar struggles to me reach their goals.”

Ortiz has always felt supported and encouraged at UNC Kenan-Flagler. It began when he got one of the most important phone calls of his life while sitting on a bench in Orlando on a gorgeous, blue-sky day.

A week before, he had unsuccessfully tried to land a graduate school fellowship, but he had been accepted into UNC Kenan-Flagler’s Full-Time MBA Program. He was going through a difficult time in the summer of 2021 while waiting on his fourth DACA renewal to be accepted, waiting for the authorization to work again. At the same time, he was figuring out how he would pay for business school.

Then Sarah Perez, managing director of UNC Kenan-Flagler’s MBA programs, called to tell him that if he wanted to pursue the Full-Time MBA Program at Carolina, he’d get a full ride.

“I didn’t know what to do with the news. I was truly stunned, truly out of words,” says Ortiz. “I realize now that sometimes there are people who are aware of you and aware of what you’re trying to do and have a little hand in supporting you.

“You never really know them until you meet them and sometimes you never meet each other.  They block and tackle for you. There’s a lot of that here at Carolina.”

Ortiz was first drawn to UNC because of the Carolina Latinx Center. He learned more about UNC Kenan-Flagler from co-workers at the Truist Leadership Institute as a student leadership fellow and stayed with the company for three years. He became a senior leadership development instructor, creating leadership programming for college students and visiting them on campuses throughout the U.S. 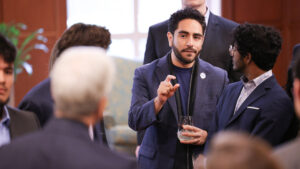 While at Truist, Ortiz took a leadership role with its Hispanic business resource group, Juntos, and successfully urged the company to sign the Hispanic Promise, a pledge to hire, prepare, retain, promote and celebrate Hispanics in the workplace.

What really made him commit to pursuing an MBA was volunteering with the Hispanic Heritage Foundation at the Humanitarian Respite Center in McAllen, Texas, which was taking in 700 migrants every day.

“As I was there serving water to the young children and their parents, I made my decision to accept the call and attend Carolina. Every one of those parents were there because they wanted their kids to one day be where I was,” says Ortiz. “I felt like I owed it to my parents, to myself and to these families to bet on myself.”

He continues his advocacy while pursuing an MBA. In addition to Líder, he serves as president of Winston-Salem-based Hispanic League’s executive board of directors.

“I came to this MBA program hoping to learn more about organizational behavior, what it takes to be a leader, what it takes to eventually be an executive coach,” says Ortiz. “But the relationships I’ve built are perhaps my favorite thing about this program.

“There are people in this program who are true to their values every single day, who speak up when it’s needed, who do not allow for the loud voices to win when it means defending the voices of those who need to be heard.”

What Ortiz remembers the most about his journey to the U.S. is the moon.

He would stop to rest and gaze at clouds passing the moon, shrouding the desert in complete darkness. When the clouds moved away, the moon was so bright Ortiz felt like he was watching a sunrise.

“I stay optimistic about my life because I have seen that even in the darkest moments, I can still find a way to see the bright light that guides me to the next stage,” he says.

And he is optimistic and purposeful about his future even as he’s hesitant to set a plan in stone. He’ll be renewing his DACA status for the fifth time in May, when he’s set to graduate. In early October, a federal appeals court ruled that DACA was illegal, affirming a lower court’s ruling. While the policy is still in place, no first-time applicants are being admitted. 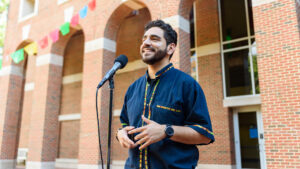 He’s still motivated by the hard decision his parents made 20 years ago to uproot to the U.S. When his father arrived in Orlando, he mowed lawns Mondays through Fridays and washed dishes at restaurants on the weekends, keeping long hours so his children could focus on school and not worry about working themselves.

When they got to Orlando, Ortiz’s mom told him that she wouldn’t be able to help him with his homework because she didn’t know English but said she could help him with everything else.

“I remember when I was at Valencia College getting my associate’s degree, I was working in my room very late. I thought everyone was asleep,” says Ortiz. “My mom comes into my room at 1 a.m. with a cup of coffee. She puts it next me and says, ‘Buenos noches, mijo. See you in the morning,’ before letting me get back to work.”

It’s because of her that Ortiz now works so hard to support others.

“My story is not possible in North Carolina. DACA recipients do not qualify for in-state tuition and do not qualify for federal financial aid. Life wasn’t easy then, and it’s still not easy,” says Ortiz. “But it’s always much easier when your mom comes in and gives you a cup of coffee in the middle of the night.

“I want to be that person for others. I want others to be able to come to UNC and the Business School and show this world what we are made of. We belong here, we can lead here and it takes all of us.”