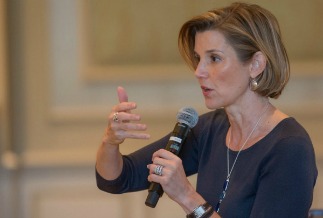 Diversity brings about a clash in ideas, she says. “This clash is where innovation lies.”

To capitalize on opportunities, companies must foster diversity in the workplace. A recent McKinsey study found that between $12 to $26 trillion could be added to the global GDP if women were fully engaged in the economy. But revolutionary change is still needed in the workplace and – for better or worse – women will need to lead the charge.

Ellevate Network, a global professional women’s network, is dedicated to advancing the economic engagement of women worldwide. The organization launched its NC Triangle chapter – sponsored by the UNC Kenan-Flagler Executive MBA and MBA@UNC programs and the Center for Entrepreneurial Studies – in October 2015.

“Our partnership with Ellevate Network builds on our commitment to continue to support the vital role of women in the workplace and their communities,” says UNC Kenan-Flagler Dean Doug Shackelford.

Krawcheck, chair of Ellevate, delivered the keynote address to a sold-out crowd at the launch event and offered advice on how to foster diversity in a corporate environment. 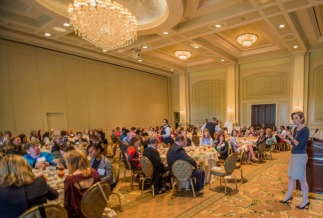 Microaggressions – such as men interrupting women during meetings – happen regularly in today’s business world, says Krawcheck, who previously served as president of wealth management at Bank of America and CEO of wealth management at Citi. Krawcheck encourages professionals to recognize and address these situations when they occur. “I noticed that you interrupted Susie several times in that meeting, but not Jimmy.”

Gender bias can also be manifested by women, adds Krawcheck, such as “the woman who climbed up the ladder and then kicked the ladder out from under her.”

A truism in business is that mentorship is necessary for success. However, Krawcheck notes, many women lack sponsorship, a special kind of mentorship in which the mentor goes beyond giving feedback and advice and uses his or her power in an organization to advocate for the mentee.

Mentorship can be mutually beneficial. Krawcheck notes one instance when she mentored a younger employee and walked away from the experience having learned new things, like how to use social media.

Women retire with two-thirds the money that men do and live, on average, five years longer than their male counterparts. To help solve the gender investing gap, Krawcheck is launching Ellevest*, a digital investment platform specifically tailored for women.

*Ellevest is a legally separate entity from Ellevate Network.