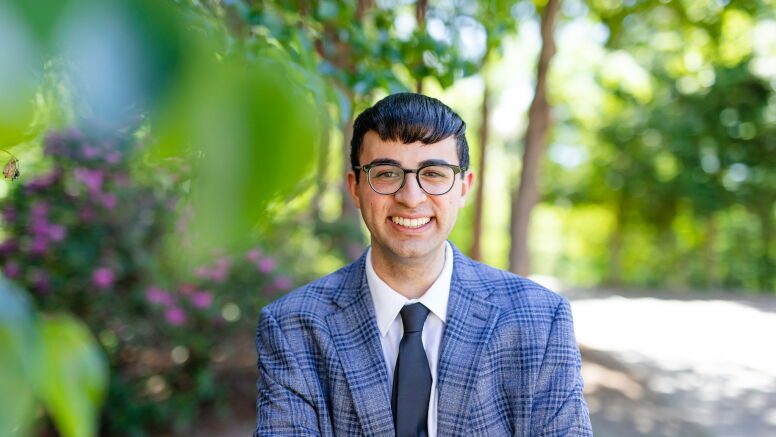 Estrada’s parents didn’t finish college and they never pressured their son in that direction. He always saw things differently.

In elementary school, Estrada would cry if he didn’t get an A. When his mom would try assuring him that everything was OK, he would say, “No, it’s not!” If he weren’t the one bringing up his grades, they would not be discussed.

Estrada learned early to push himself. He didn’t just join clubs and organizations – he led them.

He also learned how to adapt. He was born in New York City and has been traveling ever since, following his father’s Army career to Virginia and Myrtle Beach, to South Korea and finally North Carolina. His last two years in high school were in Cameron, a town of just under 500 about 26 miles northwest of Fort Bragg where his dad was stationed.

He spent many hours online researching careers and figuring out the best universities to consider. He worked through the application process on his own and set his sights high, looking for a school with strong job outcome statistics and an impressive business program.

He found his opportunity at the University of North Carolina at Chapel Hill.

He had done everything right to get into UNC-Chapel Hill, including landing a prestigious Carolina Covenant Scholarship which covers the entire cost of an undergraduate education for students who are at least 200% below the poverty line, leaving them debt-free when they graduate. Estrada also received the Edmund B. Ross III Merit Scholarship for his junior and senior years. 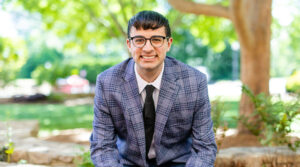 When Estrada graduated from Undergraduate Business Program (UBP) at UNC Kenan-Flagler Business School, he accomplished what he always knew he would. In August, he’ll begin work as a strategy analyst for Deloitte Consulting in Atlanta. His priority was financial security, and landing a job where he could make a big impact and express his creativity.

“I knew early on the life I didn’t want,” says Estrada. “I wanted to make the most out of any experience and not have regrets.”

Estrada calls himself lucky, but luck has nothing to do with where he is today.

He has long been armed with enviable self-drive, never needing to be motivated by others. He’s the type of student involved in eight clubs who says he needs to find a hobby.

Early on in high school he knew he wanted to go to business school but felt intimidated.

“With business school, I was worried about how I’d fit in. I always just thought the field heavily favored straight, white men,” says Estrada, who identifies as queer and Hispanic. “I was first generation, fully starting something on my own. I didn’t have a leg up or connections within the business world, which is why I felt like I had to get started sooner than everyone else.”

He got to work. When he was a first-year student, he met Cherrelle Lawrence, former assistant director of employer relations at UNC Kenan-Flagler, at a Carolina Covenant event and became his mentor. She had recently helped revamp the UBP mentorship initiative, now the Allison Mentorship Program, which supports students from underserved populations who are interested in UNC Kenan-Flagler. He was invited to join the mentorship program.

Estrada became more comfortable with UNC Kenan-Flagler. He and his mentorship cohort attended weekly events at the Business School. He met faculty and UBP staff who became his early support system. He became particularly close with Amy Bugno, director of career development and employer relations, especially when, at the end of his first year, he was named communications director of the Carolina Case Challenge (CCC), a student-run annual competition where student teams create strategies for real-world business problems. Bugno advised the CCC and worked closely with Estrada during his entire time at UNC Kenan-Flagler. By his sophomore year, Estrada was named CCC director. 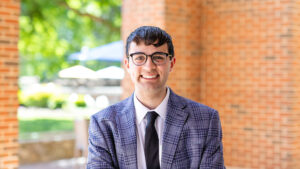 “Amy was there from the very beginning and every year I grew more as a leader with her advice and guidance,” says Estrada. “I attribute a lot of my early professional growth in college to my time with the CCC and Amy.”

Bugno knew from the first day they met that there was something special about Estrada.

“It has been incredible to watch him grow and develop over the years,” says Bugno. “He has become a confident, empathetic, creative leader right before my eyes. He has set a great example for younger students that you can bring your whole self to the Business School and succeed in whatever you put your mind to.”

He also joined business fraternity Delta Sigma Pi. He has worked as a brand analyst for Habitat for Humanity of Orange County for nearly four years and helped lead the UNC Undergraduate Consulting Club, first as vice president for a year and then director of internal operations for two.

“Those all offered me a strong sense of belonging,” says Estrada. “I felt comfortable at the Business School pretty much right away. It felt like I had found my place.”

Nothing is more interesting to Estrada than a problem that needs a solution.

He gravitated toward business classes and electives in high school because he found them the most energizing and engaging. He looked at the UNC Kenan-Flagler website his senior year of high school, found information about consulting and knew it was for him.

Consulting heavily involves strategy and analysis, but another big part is storytelling. That’s what Estrada is great at: building that story in a clear, concise way that can inspire effective and innovative business solutions.

By his sophomore year, Estrada was actively pursuing a consulting career. He was chosen as one of the 37 students to participate in the inaugural national Deloitte Leadership Allyship Mentorship Program launched by Mike Caragher (BSBA ’17), senior consultant for growth strategy at Monitor Deloitte.

Support from that program and mentorship programs at UNC Kenan-Flagler helped Estrada become the business professional he is today. It’s that kind of support that he’ll never forget.

“I’ve been incredibly moved and inspired by my mentors at UNC Kenan-Flagler and Deloitte,” says Estrada. “It’s not just about learning and practicing consulting and strategy but being compassionate and genuine. From them, I learned how important it is to bring your unique self to business. I don’t need to fit a specific mold. I can be successful just as myself.

“Now, I’m really excited to make the transition from student to alumni and give to others the support I received from my mom, UNC Kenan-Flagler advisors, Deloitte and student mentors.”