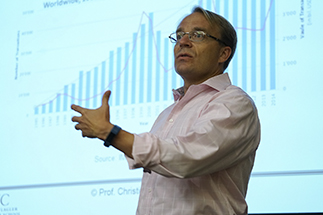 Back in 2000, Christian Lundblad, having completed his PhD in financial economics, went to work at the Federal Reserve Board in Washington, D.C. as an advisor on international financial market developments. That experience helped define his approach to academia.

“It’s a very interesting institution,” Lundblad says of the Federal Reserve. “It’s at the intersection of academic thinking and policy making. Most of the people in the room have an academic background, but they have a very explicit mandate to set policy that matters for everyone.”

His stint offered a unique opportunity at the outset of his career to examine “how academic thinking is translated in ways that matter.” When he returned to academia, he could see that intersection more clearly.

Now a professor of finance and the Edward M. O’Herron Distinguished Scholar at UNC Kenan-Flagler Business School, Lundblad has remained firmly ensconced at that nexus of theory and practice.

In fact, a primary factor in his decision to join the faculty was the School’s reputation for just such a balance. Faculty engage in high-level research, but not at the expense of delivering first-rate classroom experiences – experiences grounded in learning of practical importance.

And when it comes to service, Lundblad fills vital roles: research director of the Frank Hawkins Kenan Institute of Private Enterprise, director of the Center for Excellence in Investment Management, area chair of finance and associate dean of the PhD Program.

The Kenan Institute is a liaison between the School and business leaders, policy makers and the broader academic community. It’s a two-way street, Lundblad says. It functions as a think tank, offering data-driven analysis of immediate issues “to help move the needle in an unbiased way.” For example, it convenes leaders to examine solutions to critical economic issues facing the Trump administration, the aftermath of Hurricane Matthew in eastern North Carolina and adapting to an aging economy.

“Then, in the other direction,” Lundblad says, “the Kenan Institute engages with these different constituencies to come to a fuller understanding of what they’re struggling with to better inform our research.”

The Center for Excellence in Investment Management offers students a range of programs and resources, including hosting the annual stock-picking Alpha Challenge in which students teams from top business schools are judged by major players in the investment world, all with UNC connections.

In his PhD Program role, Lundblad says that he and Kenan Institute director Greg Brown, also a finance professor, recognized the value of having someone serve in both that position and as the Kenan Institute’s research director.

Doctoral students, Lundblad says, are the vectors through which the Kenan Institute connects its research with the interests of the broader community. “Our doctoral students are often the linking point; they do most of the hard work.”

“On the one hand, I assist our doctoral students in my role as associate dean, and on the other I promote these linkages with the Kenan Institute,” says Lundblad. “While it’s two roles, I view it as one –they belong together.” 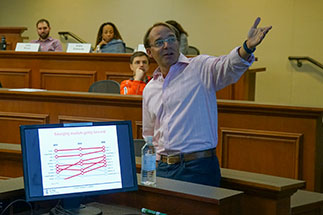 Lundblad teaches classes in global economics and global finance. Primary areas of research are asset pricing and international finance, with a focus on how finance works in emerging markets.

“It’s largely about figuring how to adjust the tools we use in a context where the rules might be different and the kinds of risks we have to internalize might be more complicated and come from different origins.”

His work often takes him to India and China. “These are fascinating countries with tremendous upside – recent success, potential for growth and an emerging middle class – and there’s all this bubbling optimism and excitement about playing a bigger role in the global landscape,” he says.

But he also sees considerable institutional challenges and political risks. “While the opportunity is very high, so too are the challenges,” he says.

Since the financial crisis, Lundblad has been studying how U.S. institutions are responding to the regulatory shift, and to what extent those responses create intended and unintended consequences. “I’ve been looking at a relatively granular level at some interesting data on how regulated bodies are changing their behavior in this post-crisis world. So many questions are arising. It’s been an interesting laboratory to ask and try to answer them.”

He’s also intrigued by the narrowing of the gap between economic and political outcomes. “What’s happening on the political and economic sides are always, interrelated, but seem particularly proximate these days,” he says.

When a society undergoes a sustained low-growth period, those segments of society most affected grow increasingly frustrated, creating “political movements or expressions of that frustration in the political sphere, which are natural reflections of frustration but can yield policies that could ultimately be counterproductive,” he says.

Lundblad cautions against failing to recognize the global interconnectedness of policies, perspectives and votes. “Borders have consequences,” he says.

On the day of the U.K. Brexit vote, Lundblad was visiting Normandy with his family. “Standing on Normandy Beach, I thought about the flags there,” he says, “and all of the different players engaged in probably the greatest moment of Atlanticism that we’ve ever seen on this planet.”

He reflected on the young men who gave their lives to end World War II. The European Union, United Nations, World Bank and the International Monetary Fund followed, all aimed toward collaboration.

The era of globalization that we’ve enjoyed is “not some inexorable truth that can’t be undone,” Lundblad says. “And you can feel that the Brexit vote was a rejection of all that. It was unsettling to me from that perspective.”

He acknowledges that people have cause to feel alarmed about their futures – frustrations expressed in the Brexit vote and the election of Donald Trump, with calls to “drain the swamp” and the instinct to build walls, real and metaphorical. Changes of global proportion breed uncertainty and, consequently, fear.

But recalling the day of the Brexit vote as he stood on Normandy Beach, “It was stunning to think about what the erection of barriers potentially implies,” he says.

The long-term outcomes of these frustrations and their related consequences are hard to know. “I’m less comfortable prognosticating now than I was a few years ago,” he says.

Regardless, Lundblad will continue to advocate for “a full-throated defense of the globalization story.” He will share it with his students, encouraging them to think critically, carry with them what they’ve learned, and go out and make a difference in the world.