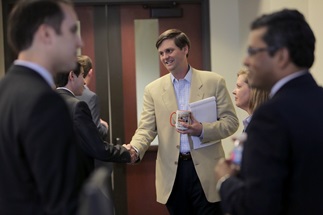 Back when Brad Staats was getting his MBA at Harvard Business School, he came up with a list of the five criteria he envisioned in a perfect job. It included learning constantly, creating value and using his love for data to solve analytical problems.

“I appreciated that at a lot of jobs you get up the learning curve and then potentially flatten out,” says Staats. “I wanted to be in an environment where I was learning constantly.”

After spending two years at a venture capital fund post-MBA, he stepped back to take a hard look at what he wanted out of his career. He didn’t take long to recognize that becoming a professor was the obvious next move.

“Academia fit all the criteria for me,” says Staats, professor of operations at UNC Kenan-Flagler and associate dean of MBA Programs. “Even if you figure out one puzzle, you’re moving onto the next one.”

He returned to Harvard to get his doctorate in technology and operations management and hasn’t looked back since. He’s been on the fast track at UNC Kenan-Flagler, where he started out as an assistant professor of operations in 2009 and quickly rose through the ranks, receiving tenure two years earlier than anticipated.

The accolades followed. He received the Wickham Skinner Early-Career Research Accomplishments Award – the premier honor for an early career operations faculty member – from the Production and Operations Management Society in 2013. His passion for excellence in both teaching and research earned him recognition from Poets & Quants, which named him one of the “Best 40-Under-40 Professors” in the world in 2014. In 2016 he received the Warren Bennis Prize – which honors the best Harvard Business Review (HBR) article on leadership published in the previous year – for his HBR article “Why Organizations Don’t Learn.”

Staats researches how knowledge-intensive organizations can improve their operating capabilities. He identifies factors that permit individuals, teams and organizations to learn more effectively. His field sites for research are located around the world, with a particular focus on India.

He’s gained notice in the academic world for his groundbreaking work at the intersection of operations and organizational behavior in corporations, which explains how to help organizations improve and employees perform at their best.

“I’m an operations professor but since organizations are made up of people, I look at the behavioral drivers of process improvement. We’ve found that there are really four barriers that get in the way of improvement: a bias for success, a bias for action, a bias for fitting in and a bias for experts. If we want to improve our organizations or even ourselves, we need to work to overcome those biases.

Over the years, his research has taken him to India, Japan and a dozen other countries where he’s studied employee productivity, how inherent biases impede organizations from achieving their goals and how to change the onboarding process of employees so employees are more likely to feel satisfied with their jobs. Much of his research has been done at telecom, technology and healthcare companies.

Staats appreciates both the left side and the right side of the brain, a mode of thinking that fuels his career. While an undergraduate at the University of Texas at Austin, he studied electrical engineering, Plan II Honors and Spanish. After graduation he took on a role as a financial analyst in the corporate finance department at Goldman Sachs, where he developed a passion for data and analytics that later served as an important cornerstone for his career.

During an orientation session at Goldman Sachs, Staats learned about the leveraged buyout model – how companies can be purchased and use the cash flow to pay down debt. The concept felt revolutionary to him at the time and helped him realize that data can be used to identify patterns others aren’t seeing and ultimately create value.

“It got me excited about what data can do, and I realized that really careful and thoughtful analysis permits us to make much better decisions – though I couldn’t have put it into words at that point,” he says. “I thrive in situations that have data but also require judgment.”

“There’s been a strong focus on analytics at UNC Kenan-Flagler, and we realize that we can push it even further,” he says.

He also has taught Data Analytics and Decision Making with Tarun Kushwaha, associate professor of marketing. It’s the only interdisciplinary core course in the MBA Program taught by faculty from two different areas of the School. It builds upon what students learn in the core business statistics course, and uses tools and frameworks like visualization and analytical models to solve organizational problems.

“We’ve had remarkable buy-in from the students, many of whom think analytics is key to the future of their careers,” says Staats. “It is wonderful and creates a great environment for learning.”

When he’s not busy designing new courses or coming up with his next idea for a research project – a recent paper looks at how to use commuting to raise productivity – Staats is an active force in the School.

In recent years, he has taken on two strategic roles for the School: faulty director of the Center for the Business of Health and associate dean of MBA Programs.

To tackle the complex issues facing business and society, UNC Kenan-Flagler launched the Center for the Business of Health in 2018. The multidisciplinary initiative connects the Business School with UNC’s leading health sciences divisions – including the Eshelman School of Pharmacy, Gillings School of Global Public Health, School of Nursing, School of Dentistry and School of Medicine – with the Schools of Social Work, Information and Library Science, and Law, and College of Arts & Sciences departments.

The initiative benefits students focused on healthcare – enhancing the MBA concentration, in particular – and Staats started teaching a Challenges of Healthcare course.

Staats is recognized as a bridge builder inside the School, too, bringing faculty from different areas together to collaborate on research, says Jennifer Conrad, the Dalton McMichael Distinguished Professor of Finance.

Staats and marketing professor Sri Venkataraman pioneered an interdisciplinary seminar series for faculty members to present early versions of their research to faculty in other areas. It has been a notable success and has helped faculty members connect and discuss areas in which their work might have synergies, says Conrad.

“The idea was to bring folks together to start having these larger conversations, and it has given us a chance to interact with each other more,” says Staats.

“Brad’s cross-functional research is inherently difficult since it requires that he understand multiple literatures,” says Conrad. “If you’ll forgive some economic language, he is a very large positive externality in the School, taking on multiple tasks – research, teaching and service – in multiple areas – operations and organizational behavior – with excellent performance in every case.”

Chapel Hill has been an ideal home for Staats and his wife – who’s working on her PhD in organizational behavior at UNC Kenan-Flagler – and their sons. The family takes advantage of all the area has to offer. Staats can frequently be found around town coaching his son’s baseball games and taking advantage of the area’s beautiful parks and outdoor attractions with the family’s golden retriever. At UNC Kenan-Flagler, he’s managed to strike what he believes is the perfect balance between a career he loves and a city and community that has been warm and welcoming to him and his family.

The strong and supportive community of UNC Kenan-Flagler students, faculty and staff is one of the reasons he loves his job. “We work together, all moving in the same direction,” says Staats. “There’s also a dedication to both rigor and relevance, with high expectations for our scholarly work and teaching, and the opportunity to have an impact on the business and organizational world.”