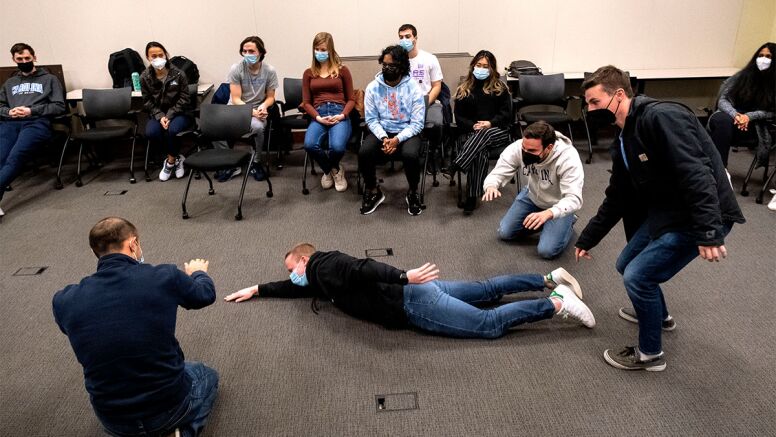 In what class can you find a refrigerator salesperson, a prisoner, a sock designer, an OB-GYN and a plastic surgeon? Try Applied Improvisation, a popular Kenan-Flagler Business School course taught by Greg Hohn, clinical assistant professor of management and corporate communication.

Hohn’s MBA students are split into three groups of nine or 10, each with their rolling chairs arranged in a triangle. They are all to be experts on a subject that their peers choose for them — a subject they likely know nothing about.

Hohn instructs the students to really embody their characters. How would they sit? Speak? What would their facial expressions be?

He reminds them to breathe and that there are no wrong answers except “I don’t know.”

And then, chaos commences.

The room is filled with mask-muffled chatter and anxiously tapping feet.

“Do they make yogurt fridges?” one student inquires.

“You can make a shiv out of anything,” another states.

A conversation with an “expert” on veganism centered around green beans leads to uproarious laughter.

This is just a typical day in one of Hohn’s classes.

Hohn graduated from Carolina in 1985 with an English degree but says he has always been interested in improvisational theater. In 1989, he joined a local group called Transactors Improv Company, which he is the director of today.

Through the ’90s, he performed and taught improv and acted in scripted theater, film, TV, radio and corporate media. 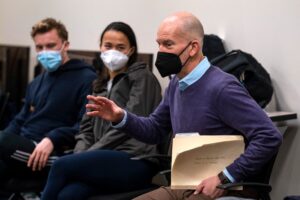 In 1997, Hohn says he had a turning point, realizing he wanted to focus on teaching. He had already started putting together an applied improv curriculum and teaching at Carolina and Duke in their continuing education programs. That led to him teaching a class at Kenan-Flagler Business School in 2000, and he’s been teaching there ever since, starting with just MBA students and now also teaching undergraduates. His book, “Putting Improv to Work: Spontaneous Performance for Professional and Personal Life,” is forthcoming this spring.

He says the benefits of taking his applied improv course vary. His students develop communication and collaboration skills, as well as creativity and the ability to think on their feet and stay calm under pressure. Even if his students don’t feel confident in a stressful situation, Hohn teaches them how to create an image of confidence.

“Hopefully one leads to the other,” he says.

It’s also inherently a team-building process, “because this way of playing and working with each other, it’s very human,” Hohn says. “It’s hard to hide your humanity when you’re goofing off and laughing and working in this way. Sometimes I jokingly say, ‘It’s lessons on being human.’”

Someone once asked Hohn what the most important thing in improv is.

He says the collaborative creativity that happens when his students pay attention and really listen is like magic.

“I say sometimes to people that the goal of improv is to get lost with your partner or your partners,” Hohn says. “It’s not to know where you’re going — that’s a different thing.”

To get outside of your ego and what you know takes emotional courage and intellectual discipline, Hohn says, because “we’re educated and socialized to be in control.” But, sometimes the most productive things come from losing control.

“When we’re working with emotion, we give our audience something to connect with because they experience emotions and then they care about the characters and they become invested in what’s happening,” he says. “It’s counterintuitive. When I’m working with improv actors, I say, ‘Play it serious; find out what your character wants; need it desperately.’ And some people say, ‘But that’s not funny.’ Oh, yes, it is.”

He says the same lesson is also important in the business world.

“The analytical side is the data, and then the emotional side is the meaning,” he says. “If you’re addressing someone, you should be able to give them data and then tell them what it means and maybe even suggest how they might feel about it.”

Much of the way we are socialized revolves around stoicism, “because somehow being vulnerable or expressive has traditionally been seen as weak,” he says. “But it’s not.”

While he wants to teach these theoretical lessons, he also wants his course to be useful.

“To me, you can blend the practical and the utile and the profound and the spiritual, and they actually go hand-in-hand really well.”

Hohn says he genuinely loves what he does.

“I kind of wandered in the wilderness for a good part of my adult life,” he says, “and through a combination of preparedness and experience and opportunity, I suddenly had this dream job open up where I get to teach something that I’m an expert in and that’s very rewarding and that’s very useful and that seems to make a difference for people.”

At the end of the day, the course “really is just about trying,” Hohn says. “I’ve had plenty of shy people just ace the course.” 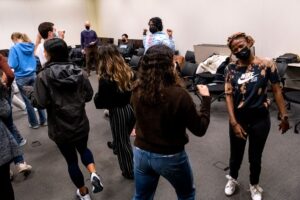 Hohn’s students improvise a non-verbal scene, playing the part of things you might encounter at the gym.

There are some written assignments and reading assignments, and the graduate students have a public performance as a final exam, but a lot of the class is about participation.

Grades are hard to quantify, but students who show up to class and volunteer will get a high grade.

Toward the end of class, the students wheel their chairs around to create an audience section, giving Hohn space to lecture. He asks them what the takeaways from this exercise were, and a smattering of hands go up.

Body language can say a lot about who you are, one student suggests.

It’s important to present confidence even if you don’t know what you’re talking about, another adds.

There’s an art to “faking it till you make it,” and Greg Hohn is teaching his students how to succeed in business — and in life.

Nicole Moorefield wrote this article for The Well.