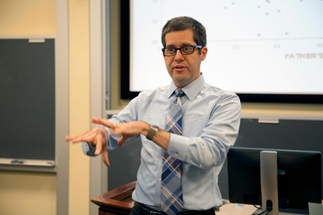 Mersereau has taken a keen interest in the retail world since joining UNC Kenan-Flagler, where he is a professor of operations and a Sarah Graham Kenan Scholar. Much of his research focuses on retail operations management, inventory optimization and supply chain management.

He’s found Zara to be a particularly rich source of insight on the movement of inventory in the retail world because of its fast rollout of apparel and use of local production. He’s made several visits to the company’s headquarters to understand how the firm approaches the retail process. The experience was illuminating.

“The appeal of a fashion design can be hard to quantify, so some decisions there are necessarily made based on experience and gut feel. This has served them well – they’re the world’s largest fashion retailer,” says Mersereau. “But it’s not the way I’m wired as a stats professor. I can’t build my fantasy football team without a spreadsheet.

I’ve learned the power of marrying analytics with human judgment. It doesn’t need to be an either-or proposition.”

Mersereau and collaborators ultimately developed a decision-support system for Zara designed to roll out new items more efficiently at its 2,000 stores, improve sales revenue and reduce the amount of unsold merchandise.

Projects like these excite Mersereau, who has a keen interest in data-driven dynamic optimization – a line of research into how decision makers who have uncertainty about their business environment can both use existing data now, as well as gather new data for the future.

Mersereau received his bachelor’s degree in electrical engineering from Princeton University and retains some of the mindset he developed while growing up with a father who was an electrical engineering professor at Georgia Tech. “I’m as much of an engineer as you’ll find in the Business School,” says Mersereau. “I’m still learning how to be a business school professor.”

After a stint working as an analyst in Goldman Sachs’ fixed income division, Mersereau returned followed his father’s footsteps into academia. He earned his PhD in operations research from the Massachusetts Institute of Technology, where his studies were a hybrid of engineering and business, and took a job as an operations management professor at the University of Chicago Booth School of Business.

He came to UNC Kenan-Flagler in 2007 with his wife, a physician and fertility specialist at UNC. Chapel Hill proved to be an ideal fit for both of them and has been the perfect place for the couple to raise their two daughters.

“It’s the kind of school where people get along with each other, as well as a school where people are hungry and innovative,” he says. “UNC Kenan-Flagler has been a really good personality fit for me. It’s small enough that I can know my students on a first-name basis.”

Mersereau is a familiar face on campus and is one of the first professors incoming MBA students encounter when they begin classes in August. He teaches the required course Business Statistics and Analytics, which introduces students to statistics and decision modeling, and has taught the course to Weekend MBA students.

He developed a more in-depth elective, Data Analytics, to give MBA students a deep dive into data modeling and analytics strategy. The course was initially offered with just one section of 45 students and proved to be more popular than Mersereau anticipated.

“Not only did the class fill up, but there was a waiting list of 100 people,” he says. “I attributed that to the fact that this is a skill set the market is looking for, and the students were interested in it.”

He developed a similar elective class for the MBA@UNC program and teaches in UNC Executive Development’s Big Data and Business Analytics program.

Mersereau has been involved with the School’s online MBA program since its inception in 2011. He co-developed a core analytics class for the program – a fun process during which he and colleague Alan Neebe rented out a film studio and did statistics demonstrations “Mr. Wizard” style, wearing white lab coats and demonstrating dice experiments.

While no Mr. Wizard style demonstrations were involved in the development of the new Data Analytics course, he enjoyed working in the online space again.

“It’s been interesting designing another course for the program because the technology has gotten better and is more polished than it was when we started,” says Mersereau.

His passion for teaching students how to master data analytics and statistics has not gone unnoticed on campus. Mersereau has received several teaching awards, including the Weatherspoon Award for Excellence in MBA Teaching in both 2011 and 2017, and a teaching excellence award from Weekend MBA students. He also serves the School by judging case competitions on campus, advising PhD students and answering emails from students who are grappling with statistics problems during their summer internships and need advice.

“Everything that Adam does is high quality – his research, teaching and service,” says Jennifer Conrad, former senior associate dean for academic affairs and Dalton McMichael Distinguished Professor of Finance. “His research is also extremely applied. And who doesn’t like retail? We are grateful to have Adam teaching in the core and in electives for multiple programs, as well as teaching in our Executive Development program. Faculty members like Adam – who goes above and beyond – are what make our School excellent.”

When Mersereau’s not teaching or advising students, he’s looking for his next research project. The retail world, rife with uncertainty, has proved to be the ideal research space for Mersereau. He has examined issues like inventory record inaccuracy, markdown pricing and demand experimentation.

“There’s been a realization that retailers are sitting on lots of data, and there are many new sources of data that they are still wrapping their heads around,” says Mersereau. “With all of these new data sources emerging, the retail world is a very exciting place to be right now.”