Working for a greater good 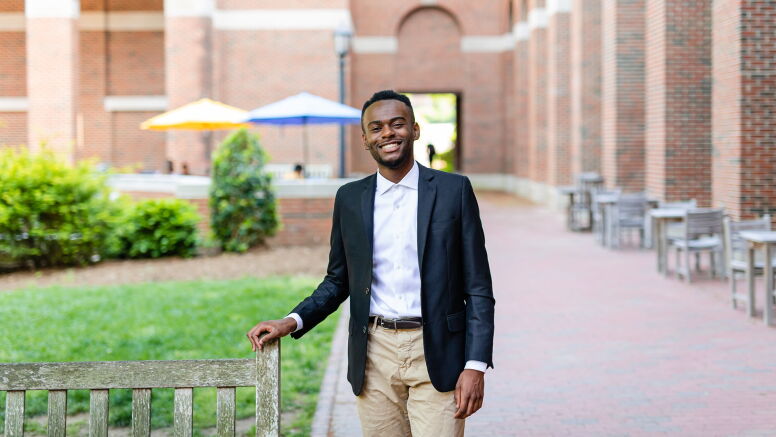 Garnet Valley, Pennsylvania, is 25 miles southwest and a world away from inner-city Philadelphia.

Derek Brown (BSBA ’24) has long straddled both worlds. He grew up comfortably in Garnet Valley, with top-rated public schools, high home values and extremely low violent crime rates. He went to a predominately white high school and didn’t have a teacher who was Black, who looked like him, until he got to college.

Brown also knew inner-city Philadelphia well. All of his mother’s family is from there. He went to church there. He spent every weekend throughout his childhood and teenage years going back and forth between there and Garnet Valley.

“My parents made no attempt to sugarcoat the situations I was experiencing,” says Brown. “They were blunt about the disparities that existed between the community I grew up in and the communities in Philadelphia I was walking in and that my family lived in, where people looked like me.

“I remember my mom telling me, ‘We are the exception. This is not how it is for everybody.’’’

That made sense to Brown, who grew up wondering why nobody in his classes looked like him.

“I felt slightly off to the side a little bit,” he says. “You can’t really put your finger on it, but it’s definitely present. You know there’s this stark difference between you and everyone else. There is disparity wherever you look.”

“UNC Kenan-Flagler is the place where I can see my dreams and vision come to life,” he says.

“This is exactly what I want to do.”

His parents’ commitment to giving back had always inspired Brown. In high school he did everything from launching a coat drive that collected over 650 pieces of clothing to raising money for cancer research.

The drive to help others led him to the University of North Carolina at Chapel Hill to study economics and public policy. Here he had, for the first time, substantive conversations with people his age about racial, economic and educational inequalities.

Brown was soon looking for a way to use business to address the social issues he is most passionate about. At UNC Kenan-Flagler, he met with Jim Johnson, the William R. Kenan Jr. Distinguished Professor of Strategy and Entrepreneurship and director of the Urban Investment Strategies Center.

“We had a conversation where he used the phrase ‘entrepreneurial solutions’ to talk about alleviating poverty in both rural and urban communities. It was the perfect way to say it,” says Brown. “I said to myself that’s exactly what I want to do.”

And he’s doing it. Brown is a Kenan Scholar at UNC Kenan-Flagler’s Frank Hawkins Kenan Institute of Private Enterprise. The institute focuses on solving economic issues with innovative business solutions and a distinct entrepreneurial spirit.

Kenan Scholars like Brown aren’t just spectacular students. They are driven to use business for the public good. 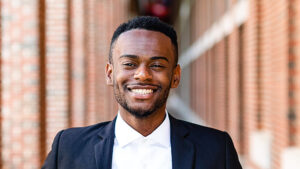 Brown is majoring in both business and public policy, combining the crucial technical skills he is developing at UNC Kenan-Flagler – infrastructure building, the role of corporations in private and public partnerships – with a deeper understanding of social issues and developing tangible solutions to tackle them.

More than just a job

Brown is also exploring business solutions for poverty outside of his business studies.

He is one of just 13 students nationwide chosen to participate in the Institute for Responsible Citizenship (IRC) 2022 summer internship program. Held over two summers, the rigorous program brings together Black male college students to live, study and attend professional development workshops, learning from an array of private- and public-sector leaders.

“It’s so important just to be able to have so many people that I can talk to and aspire to be,” says Brown. “You’re being put in a position with other Black students to grow and develop both personally and professionally so you can be that influential leader for other Black men and women who follow.”

It began with a phone call. Brown got the opportunity to chat with William Keyes, IRC president in Washington, D.C. Keyes earned his PhD in communication studies from Carolina and later served on the UNC Board of Trustees. He also is on the board of directors of the NC Study Center, a Christian ministry fellowship space at UNC-Chapel Hill where Brown in active.

They didn’t talk about the IRC program. Instead, they discussed ways to foster diversity at Carolina and the experience of being Black men at a predominately white university. They talked about rural poverty in eastern North Carolina, where both have family members. 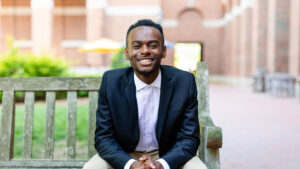 That’s a big part of the program that Brown is looking forward to the most: simply talking about what it’s truly like to be Black in America and the economic and constitutional principles that influence that experience. Those are in-depth conversations that Brown never had the chance to have, especially when everyone in the room is a Black male.

“UNC Kenan-Flagler and Kenan Scholars admit and support some of Carolina’s best and brightest African-American men, many of whom need the mentorship, connections and networking opportunities and access to social capital afforded by the Institute for Responsible Citizenship,” says Kim Allen, Kenan Scholars program director. “Like the Kenan Scholars program, the IRC fosters the development of future leaders who are committed to a greater public good.”

To Allen, Brown also represents a group of modern business students who see their future career as more than just as job.

“I believe he will be part of the young wave that generates high-impact entrepreneurial solutions to complex problems facing marginalized communities,” Allen says. “Our job is to produce leaders who’ll change the world for the better.”

Make it into something

There’s more on Brown’s plate this summer. While in Washington for the IRC program and as part of his Kenan Scholars public sector internship experience, Brown will be a lending intern for the National Housing Trust, letting him further explore urban blight and the power and purpose of affordable housing within real estate development.

“How do we impact inner city communities that are being gentrified? How do you help Black residents who are being pushed out of the communities they’ve lived in for as long as they can remember?” says Brown. “And how do you create affordable housing that isn’t bottom of the barrel and isn’t just meant to regulate people to a way of living that is not ideal?”

Brown is eager to address issues besetting other cities he has recently visited, such as San Francisco and Las Vegas. But he says there’s a strong chance he’ll come back to Philadelphia where the racial and economic barriers Brown saw as a child only strengthen.

“UNC Kenan-Flagler and Kenan Scholars have given me the tools and skills to refine my vision and make it concrete,” says Brown. “To make it into something.”