Women designing for change in entrepreneurship

“There are ups and downs in entrepreneurship, just like riding a roller coaster – sometimes it’s exhilarating and other times it’s scary,” says Vickie Gibbs (MBA ’98), executive director of UNC Kenan-Flagler’s Eship Center.  “But having a community around you as you ride those waves is critical so your peers and mentors can help lift you up and determine what you learn from each experience.”

While women in entrepreneurship are still in the minority, their number and success are growing, says Judith Cone, vice chancellor for innovation, entrepreneurship and economic development at UNC-Chapel Hill. Between 2014-19, the number of women-owned businesses increased 21%, while all businesses increased only 9% according to “The 2019 State of Women-Owned Businesses Report” commissioned by American Express.

UNC is a place where innovators thrive, says Cone. “We have a goal to move a greater number of valuable ideas in the world faster and make the greatest human and economic impact possible.”

Her office is committed to helping female innovators do what they care about. “You will make mistakes but by learning from other women, maybe you won’t make mistakes that they have already made,” she says.

Niki Shamdasani (BA ’15), co-founder and CEO of Sani, a brand of South Asian-inspired fashion, is dedicated to bringing other women along on her journey. “Our company has a women-centered supply chain and all of our clothes are made in India,” she says. “Our brand is meant to provide South Asian first-generation American women better and a more nuanced representation.”

As a young, petite woman, Shamdasani finds fashion’s male-dominated industry to be challenging, particularly in India. “There are a lot of cultural stereotypes about what women should be doing and should not be doing,” she says.

To counter that, she is “ultra-prepared” before meeting with potential strategic partners.

“I make sure that I am very knowledgeable about everything, including the financials, so that when I walk into a room, my knowledge can overcome my physicality,” she says. “But that doesn’t always work.” 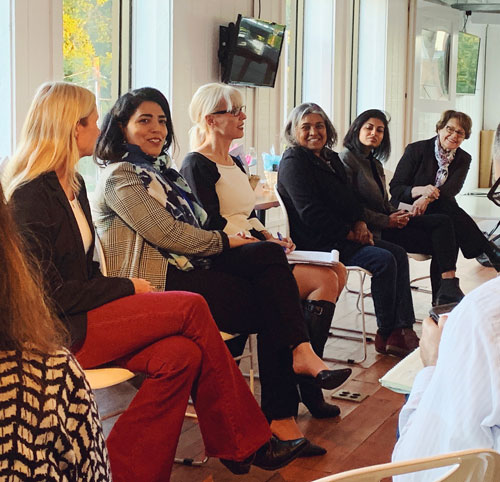 More is expected from women entrepreneurs, says Chelsea Eshraghi (MBA ’15), director of the Carolina Angel Network (CAN), which supports the Carolina entrepreneurial community with an angel investing platform and co-investment fund.  Women are much more likely to bootstrap their venture and not seek outside funding, she says. “In ventures led by women, fewer are being launched and fewer are going to scale than those led by men.”

“With so few women in entrepreneurship, it can sometimes feel like a boys’ club, where women face unconscious bias from investors,” she says.

“As women, we have to know our stuff inside and out,” says Eshraghi. “There is no assumption (by investors or others) that women know what they’re talking about. We have to always prove our knowledge.”

Eshraghi credits UNC Kenan-Flagler’s MBA Program for its diverse student population helping her and her female classmates become more assertive and confident. “Having a group of confident women in our class was empowering,” she says.

“One thing that can hold women back is if they are hesitant to speak up or be very direct,” says Eshraghi. “The female entrepreneurs that the Carolina Angel Network has funded are very confident. While they are open to advice, they also know that they deserve a place at the table.”

Gibbs echoes the importance of diversity in successful entrepreneurship. “While the Entrepreneurship Center is at the Business School, we partner across campus,” she says. “In the real world, you don’t have just business people in ventures that work.”

She encourages women to align their passions with their purpose. “Know your strengths and live into them,” says Gibbs. “We as women discount ourselves too often. Encourage each other, encourage yourself. Whatever you set your mind to, find the resources and you can do it.”

“Be brave – you are going to fail sometimes,” says Gibbs. “You have to learn how to fail forward.”