Why real estate development is booming in the Queen City 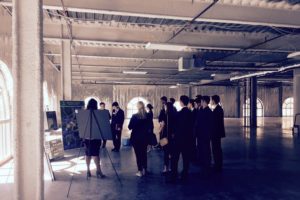 Charlotte, North Carolina has experienced a great deal of commercial real estate development in recent years. The city – historically known as a Southeastern hub for finance and banking – is attracting a diverse array of talent and companies in a variety of industries, driving real estate development across all asset types throughout the city.

UNC Kenan-Flagler’s MBA Real Estate Club visited the Queen City for a career trek and learned how real estate professionals in Charlotte are working to expand the city’s core and bridge the gaps between communities through development and collaboration.

Stonewall corridor development extends Uptown border
Crescent Communities has been instrumental in developing the Stonewall light rail station, which is quickly blurring the line between Charlotte’s Uptown CBD and the fast-growing South End neighborhood. Charlotte’s LYNX light rail system connects the two communities and has created a natural flow of activity to the underutilized Stonewall Street corridor along the southern edge of Uptown.

Crescent’s Stonewall Station development will include a new Whole Foods Market. Customers will have direct access to the store from the rail station, making it the most accessible grocery store in the U.S. via public transit, says Michael Tubridy (MBA ’14), director of development for Crescent.

In addition to the Stonewall Station project, Crescent’s Tyron Place development and Lincoln Harris’ Capitol Towers office development – located on the site previously occupied by the Charlotte Observer – are extending the economic energy from Uptown to the South End and will further revitalize the Stonewall corridor.

Office and retail tenants find creative spaces among South End’s multifamily projects
Across the Interstate 277 loop in the heart of South End is 1616 Center, an office and retail building developed by Beacon Partners. The building is a perfect example of how office tenants are finding opportunities for open, collaborative spaces in walkable, active submarkets. It is within walking distance of the East/West Lynx light rail station, and tenants will also have easy access to a bike-share program, fitness center, locker rooms and a large executive conference room overlooking the Charlotte light rail line.

Looking north along the Blue Line expansion
The north side of Charlotte is also undergoing a shift. The northward extension of the light rail, which is expected to be completed in 2017, will connect the city center to the UNC-Charlotte campus. Office and mixed-use developments are becoming more prevalent, attracting employers – such as Google – who value the research capabilities and human capital the university provides and want to tap into its talent pool.

Charlotte’s reach continues to expand
Wells Fargo’s Bob Bertges told us about how his team collaborated with Childress Klein, the Levine family and other partners to bring cultural destinations such as the Bechtler Museum of Modern Art, the Harvey Gantt Center for African American Studies and the Mint Museum to Uptown Charlotte.

As Charlotte expands its cultural offerings, it continues to attract the best and brightest people to live and work in the city. The strength and increased diversification of tenants and consumers is also attracting institutional funding for exciting development projects, which will bring even more energy to the city. We could feel the momentum as we zig-zagged through the cranes and construction sites covering the Queen City.