Skip to content Skip to Programs Navigation
When personal tragedy struck, this professor found support in the Carolina community

When personal tragedy struck, this professor found support in the Carolina community 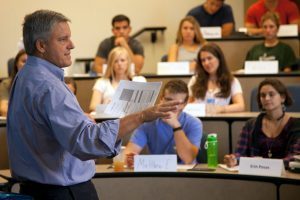 In the midst of a personal tragedy, professor Chip Snively did what he does best: teach.

The week before Thanksgiving break, he told students classes would be canceled because of a family emergency. He could have left it at that. But instead, Snively – a teacher in every sense of the word – decided to get real.

“My nephew committed suicide on Monday,” he wrote in an email to his students. “He was a 17-year-old high school senior.”

Snively got the devastating news in between classes and had little time to gather himself before his next section began. Though he did his best to carry on with business as usual, several students noticed something was off and reached out to express their concern. Given the circumstances, he felt compelled to share what had happened with them.

“I wanted to encourage my students to be open about their personal struggles and aware of friends and family members in need,” says Snively, who plans to advocate for increased awareness on mental health issues. “If acknowledging this tragedy helps just one person get the help they need, then all the better.”

“Life is fleeting and fragile, so enjoy every moment.”Chip Snively

Snively’s students responded with an outpouring of support. As they extended their condolences, many also shared their own experiences, troubles and tragedies, reaffirming his decision to address a difficult and deeply personal situation head-on.

Then, as the one-month anniversary of his nephew’s passing approached, Conor Hayes (BSBA ’18) and Caitlin Gallant (BSBA ’19) stopped by Snively’s office to tell him that members of UNC’s Alpha Kappa Psi (AKPsi) fraternity had made a $250 donation to The American Foundation for Suicide Prevention (AFSP) in his nephew’s honor.

“I was literally speechless when they told me,” says Snively, who was inducted into AKPsi in 2015. “I can’t begin to tell you how touching and humbling this genuine gesture is to me and my family.”

The gesture is especially meaningful coming from his students, who he holds in the highest regard. For Snively, teaching isn’t just a job. He makes a point of getting to know students personally and invests heavily in their success – and not just within the confines of the business world. For his students to extend such an outpouring of compassion, support and generosity speaks volumes.

“Our students are amazing. I’m so honored to be their professor,” says Snively, who was so moved that he made a matching gift to AFSP. And the support didn’t stop there. He soon learned that his students’ generosity had inspired one of the Business School’s senior administrators to make an anonymous gift to AFSP, too. The way the Carolina family rallies behind their fellow Tar Heels – through good times and the more difficult ones – is what makes UNC so special.

“UNC Kenan-Flagler isn’t just a business school – it’s a community and a family. It really is hard to put into words, but I can tell you it’s never been more evident to me,” says Snively. “I couldn’t be prouder and more humbled to be a member of this university and business school. I count my blessings every day for the opportunity my family and I have been given.”