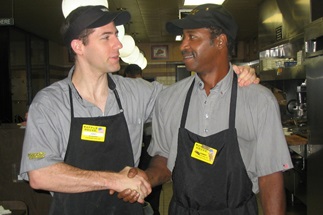 James “Jimmy” Adams (EMBA ’07) climbed his way to the top of a multi-billion dollar portfolio management team, earning a six-figure salary and comfortable benefits – all before hitting 30.

But when the financial crisis hit and Adams was laid off, he decided to pivot. In 2009, Adams began working the night shift at Waffle House.

“I needed to clear my head,” he said in a Fox News interview about why he went from finance to fast food.

“Whenever anyone talked about the global meltdown, everybody’s finger pointed at everyone else. It was Fannie Mae and Freddie Mac, the Community Reinvestment Act, unscrupulous realtors,” he explains. “The fact of the matter is, everybody was in on it and nobody took responsibility. And that’s what drove me nuts about it.”

Adams documents his experiences in his book “Waffle Street: The Confession & Rehabilitation of a Financier.” Part textbook, part memoir, “Waffle Street” structures anecdotes about working at a Durham Waffle House around a lecture series on economics, combining life lessons with practical business knowledge.

“I thought people would appreciate the self-deprecation,” he says.

The financial misguidance that caused the recession and his role in all of it prompted Adams to reflect on the moral basis of business. Ethical considerations are missing from financial decision-making when firms are only concerned about the bottom line, he says. “We don’t think about the systematic implications of what we do. The primary job of a manager is to ask, ‘How does this maximize shareholder value?’”

Students did think about how to manage ethically and answer the tough questions in Adams’ class at UNC Kenan-Flagler. One exercise, for instance, asked students: if you have a drug, should you make it available to people who can’t afford it?

Adams’ education continued throughout his transition from vice president of a N.C. money management firm to Waffle House server to part-time Hollywood screenwriter. His diverse path has equipped him with a unique skillset consisting of everything from portfolio management to cooking hashbrowns – scattered, covered and smothered! 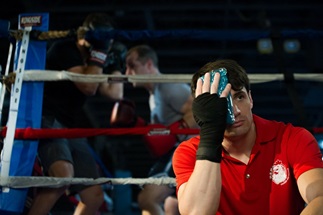 In 2015, his book was adapted and produced into a feature-length film called “Waffle Street” starring James Lafferty and Danny Glover.

Adams was heavily involved in the pre-production process and shaped the final screenplay after editing about 20 different drafts. Casting a leading man proved difficult as well, although he was happy when Lafferty accepted the role.

“When I met him I said, ‘That is an exceptionally good-looking guy!’ If I have to be immortalized on screen, I could do a lot worse,” laughs Adams.

“Waffle Street” is now streaming on Amazon, Hulu and iTunes, and will soon premiere overseas. The publishing company released a special movie edition of the book featuring Glover and Lafferty on the cover.

Adams is still scratching that financial itch, serving as a senior research analyst for a private trust company in Pennsylvania and has continued screenwriting on the side. He has a work-in-progress about a college lacrosse team, but he’s not ready to divulge too many details yet.

As young professionals think about their career trajectory, getting an MBA might seem like the next logical step – but the degree doesn’t always guarantee a fixed path ahead of you, says Adams. “You can do the right thing and check the boxes,” he notes. But at the end of the day, “there’s just a lot of luck involved.”

“I never thought I would do screenwriting, but getting laid off put me on that track,” he says. “If you embrace the ambiguity of life and don’t shy away from it, you can end up in extraordinary places.”

Adams advises recent graduates to focus on doing the right and ethical thing no matter what career they’re in, and to embrace the uncertainty of the future.

“Sometimes the climb tends to be linear and in other cases, meandering. Just know your legs are moving in front of you one at a time,” he says.