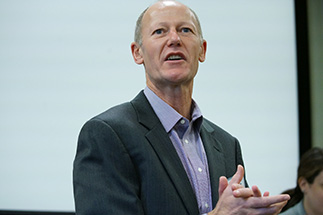 A holiday picture encapsulates the story of the move from California to North Carolina Wendell Gilland and his family made in 1997 after he completed his PhD at Stanford.

The first holiday card he and his wife sent out from their new home featured a picture of their young daughter and son wearing a University of North Carolina cheerleading outfit and Stanford basketball uniform, respectively. The kids’ photo showed where the family was heading and where it had been.

“We wanted a college town, and I wanted to live near the university for flexibility,” says Gilland. “I thought about all these things, and without necessarily realizing it I was describing this area pretty perfectly.”

Then, when deciding between job offers at Duke University and UNC Kenan-Flagler Business School, UNC won.

“The people keep me here,” Gilland says. “I enjoy working with everyone here. They are incredibly smart and down to earth. And the students in all the programs are terrific.”

What Gilland happily discovered is the Carolina Way goes far beyond the campus’ borders. North Carolina residents with no direct affiliation to UNC feel it’s “their university” because it is the “university of the state,” he says.

When the UNC Tar Heels won the NCAA championship in 2017, Gilland watched the semi-final game along with alumni in New Orleans. They embraced him as though they were old friends and the victory celebration brought everyone even closer. “It was really cool,” he says.

Of course, Gilland’s time at UNC Kenan-Flagler isn’t all about family, the one at home or the one at work. It’s also about teaching and research, about which he is passionate.

The man teaches. A lot.

Gilland is always willing to lend a hand when needed. He often participates in global trips with students, including leading Undergraduate Business students on a Global Immersion Elective to Dubai and Abu Dhabi.

These experiences abroad speak to UNC Kenan-Flagler’s recognition of the importance of experiential learning, says Gilland. Seeing students, many of whom had never been out of the U.S., meet with executives and begin to understand the role cultural differences play in business in another country is very satisfying, says Gilland.

He has often served as faculty advisor for student teams working on STAR Global projects. For five years in a row, he traveled with them to Brazil team. “These trips serve as a transition from the classroom to the companies for which students will be working,” says Gilland. “This is somewhere in between. It’s safe. They won’t get fired if something goes wrong here.”

Indeed, one of the highlights of his MBA courses is the Littlefield for Operations simulation, which was developed at Stanford. Student teams manage a production facility. Giving students the chance to test waters and put theory into action is a priority.

“What I really try to do is put myself in the shoes of students,” says Gilland. “It took me time to realize I wanted to be a professor. I have had exposure to different fields in business, and I understand connections between the subjects we cover and the real world. But I also know the mindset of students.”

Before choosing to become a professor, he worked at Monitor Company, a consulting firm founded by Michael Porter, where he tested business strategy frameworks for Fortune 500 clients. He also worked at the consulting firm CSC Index, which launched business process reengineering. Gilland also has consulted for a number of companies, including Apple Computer, Intel and Sony.

These outside experiences helped build the foundation for teaching, research, and service at UNC Kenan-Flagler. Gilland has won numerous awards over the years, including Weatherspoon Awards for Teaching Excellence in the Undergraduate Business and full-time MBA Programs.

Indeed, practical information – how to translate what is being learned in class into applicable skills – is a theme in Gilland’s career. He worked on the UNICEF Nutrition Articulation Project, a consulting effort for the non-profit organization help those in Africa with malnutrition get access to ready-to-use therapeutic food.

Being practical is evident in his research, too. He is focused on how organizations can take advantage of flexibility. For example, he studied leveraging flexibility with staffing models like employing part-time or flex workers in retail.

Cross-training, such as a hospital finding ways to help nurses flow from one floor to another efficiently, is another topic he honed in on. Product flexibility also interests him. For instance, he looks at how to determine what to stock based on the likelihood a customer looking for Diet Coke will settle for Diet Pepsi if the preferred option is not available.

Keeping everyone engaged is another theme that emerges when talking to Gilland. One of the challenges he notices on campus is the Business School can seem physically isolated from the rest of the University. To be part of the solution, Gilland makes an effort to connect with the main campus. He serves on the board of directors of the Carolina Union and Student Legal Services, a three-attorney law firm representing UNC students.

Gilland likes trail running, mountain biking, and spending time with his family. His two sons and daughter are adults now. His “baby,” who was born at the UNC Hospital, is headed to the University of California, Berkley. His older son is in private equity, and his daughter works at the UNC Hospital. Clearly, family ties are the ones that bind.

And Gilland’s devotion to UNC Kenan-Flagler is based on his fulfilling career.

“There are different rhythms, paces to these different responsibilities,” says Gilland. “It’s nice having variety.”