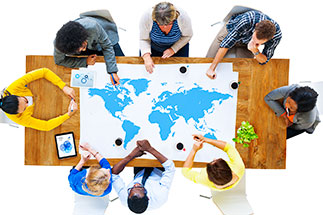 Examples of extraordinarily successful and creative individuals who, early in their lives, cultivated relationships with people from other cultures are easy to find.

Marie Curie was born in Poland, but moved to Paris where she met and married Pierre Curie. They conducted groundbreaking research on radioactivity and won a Nobel Prize for their achievements. When he was a young man, Apple co-founder Steve Jobs studied with  Japanese Zen teacher Kobun Otogawa in San Francisco, meeting with him every day and going on retreats with him.

Could it be that close relationships with people from other cultures nurture creativity and innovation? That’s the question that William Maddux, professor of organizational behavior at UNC Kenan-Flagler Business School, started looking at more than a decade ago along with his longtime collaborator Adam Galinsky at Columbia Business School.

The question has personal resonance for Maddux. He lived in Japan for four years after graduating from college, married a Japanese woman, and lived in France for a decade after becoming a professor.

When he and Galinsky started their work in 2005, they assumed someone must have conducted empirical research on the effects of intercultural experiences on creativity.

“There’s a lot of anecdotal evidence for artists, writers, for painters and musicians,” says Maddux. “But in terms of the scientific evidence that there’s a causal relationship between experiences abroad and subsequent creativity, there wasn’t a whole lot when we first started working on these ideas.”

It wasn’t just idle personal curiosity that sparked their interest. Many people end up living or working in countries other than the ones they were born in. And in our interconnected world, technology makes it easy to strike up – and sustain – relationships with people around the world, even if you can’t travel.

Companies are interested in cultivating people who are creative, innovative and entrepreneurial. Universities, including business schools such as UNC Kenan-Flagler, provide more and more international experiences for students.

While some of the researchers’ work did find that living and working abroad – but not necessarily traveling abroad – has a causal impact on creativity, Maddux and five colleagues wanted to know if creativity could be affected by having close relationships with people from other countries.

To assess if intercultural relationships might cause people to become more creative, they studied 115 MBA students from a top international business school and assessed their creativity at the beginning and end of a 10-month program.

Using several common tests of creativity, such as presenting participants with a brick or a box and asking them to list as many potential uses for it as possible, the researches evaluated the students’ creativity at the beginning and end of the study. At the end, they also asked if students had dated a student from another culture during the program.

The students who dated someone from another culture during the 10-month period were more creative, based on the assessments.

In another study, Maddux and his colleagues assessed what impact reflecting on either an intracultural or an intercultural dating experience had on participants’ creativity. They recruited 108 participants, each of whom had dated both people from their own cultures and from other cultures.

They asked participants to write about either the same-culture or different-culture dating experiences, and then gave them a Remote Associates Test (RAT), a long-established way to assess verbal convergent thinking, an aspect of creativity. Participants who had written about their intercultural dating experiences solved significantly more RAT problems (8.07 on average) than those who didn’t (6.56).

The researchers examined intercultural friendships and how they might affect entrepreneurial behaviors In a fourth study. They surveyed 3,840 former J-1 visa holders – skilled workers who had come to the U.S. for a time under a J-1 visa and then returned home. They asked participants if they had maintained friendships with Americans they met or worked with while in the U.S. and about their work activities.

Those who reported being in contact more often with American friends after returning home were more likely to have started companies or done something innovative, such as introducing a new way to review programming code.

What it means for business

The research confirmed the intuition of Maddux and colleagues – based on their personal experience and numerous anecdotes. Intercultural relationships can boost creativity, innovation and entrepreneurship – all important for businesses.

For individuals, developing and maintaining meaningful, long-term relationships with people from other cultures has substantial value, their research suggests. When living or traveling abroad, make efforts to get outside the ex-patriate bubble and find ways to engage with locals. Even in one’s home country, seek professional and social opportunities to meet and develop friendships with people from other cultures.

Connect with people on a deep level is important in these relationships. That means embracing and celebrating and truly understanding cultural differences because it is learning about those differences that helps boost creativity.

The bottom line – for both individuals and organizations – is that close, intercultural relationships can make people more creative, innovative and entrepreneurial.