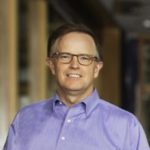 Luck spoke to business students at the Family Enterprise Center, where he shared insights on how he has inspired innovation through a culture of leadership at his family firm – not an easy task for a third-generation leader in an already well-established company.

To build success within a company, everyone involved must share similar values to work towards a shared vision and mission. Despite achieving tremendous financial success, Luck Companies seemed to lack a solid understanding of where the firm was going. Using values-based leadership to build a stakeholder-wide vision and mission, it was united behind its shared values: creativity, commitment, leadership and integrity. These values have driven the company’s culture and created a strong focus on leadership development within the organization.

You must earn respect before you can make significant changes. Shortly after joining the family firm, Luck eagerly created a list of things to change and improve. After presenting the list to his manager, he was told to come back in several years – once he had earned the respect of his co-workers. It was a tough lesson, but one that he now strongly believes in.

Focus on people first. The values based leadership program inspires all members of the Luck Companies team to ignite the human potential within themselves and the people around them. When companies focus on people first, creativity follows – along with customers and subsequent profitability – which leads to solid business for the firm’s bottom line.