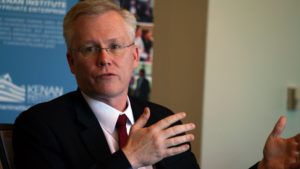 Piwowar highlighted the primary functions of federal market regulators, including the SEC, the Commodity Futures Trading Commission (CFTC) and banking regulators such as the Federal Reserve, the Office of the Comptroller of the Currency (OCC) and the Federal Deposit Insurance Corporation (FDIC).

What does it mean to regulate the securities markets?

Any firm that wants to offer or sell its securities to the public has to register with the SEC. Registration occurs when the firm issues an initial public offering (IPO).

This registration allows public access to the company’s reports and statements, including earnings reports, annual reports and proxy statements.

“Unlike some securities regulators throughout the world, we are not a merit-based regulator; we are a disclosure regulator. We don’t make a judgment in terms of whether this is a good company or a bad company,” said Piwowar. “But we have very strict disclosure requirements.”

The SEC regulates not only public companies, but also investment companies, such as mutual funds and exchange-traded funds. These companies pool money collected from multiple investors and invest in a diverse asset portfolio.

A past of regulation

The SEC was created in 1934 as a part of the New Deal legislation adopted after the stock market crash and the Great Depression. Since then, Congress has continued to refine the SEC’s authority, often in response to an economic crisis or event.

For example, after the financial crisis of 2008, the Obama administration passed the Dodd-Frank Wall Street Reform and Consumer Protection Act. The act established new agencies to oversee aspects of the banking system and tightened regulation.

According to Piwowar, in recent years, the SEC has been kept busy trying to implement Dodd-Frank mandates, leaving it little time to focus on updating outdated legacy regulations.

“With the changeover in the administration, there’s now the opportunity to go back and revisit some of those things that we hadn’t been able to do and modernize some of our regulations,” said Piwowar.

According to Piwowar, some of the biggest issues facing the securities markets are that fewer companies are going public, companies are staying private longer and fewer foreign companies are listing in the U.S.

“It used to be that we were the listing venue of choice throughout the world and we had the most competitive, most liquid and deep capital markets,” he said. “If you were a foreign company and wanted access to capital in the U.S., and you wanted to show the rest of the world that you were going to bind yourself to high-quality accounting, high-quality regulation and high-quality legal institutions, you would want to list in the U.S.”

While the benefits of listing in the U.S. remain the same, the associated costs have gone up.

A future of investment opportunities

As the SEC’s implementation of Dodd-Frank comes to a close, the organization’s focus is shifting.

“The two new words we’re looking at are capital formation,” said Piwowar. “That third part of our mission had been missing for six and a half years, and now we’re focused back on that. What can we do at the regulatory level to make our capital markets more competitive again vis-à-vis the rest of the world, and vis-à-vis the private securities markets?”

The SEC is working to get more companies to tap the public capital markets. In doing so, it wants to give average investors access to more investment opportunities.

“We are actively looking at the things we can do in the regulatory environment to try to encourage those companies to go public,” said Piwowar.

He added that, with the diminished need to implement mandates, the SEC is now able to shift its attention to its role in supporting the health of U.S. markets – providing access to capital and creating more investment opportunities to investors.