Understanding the possibilities of blockchain 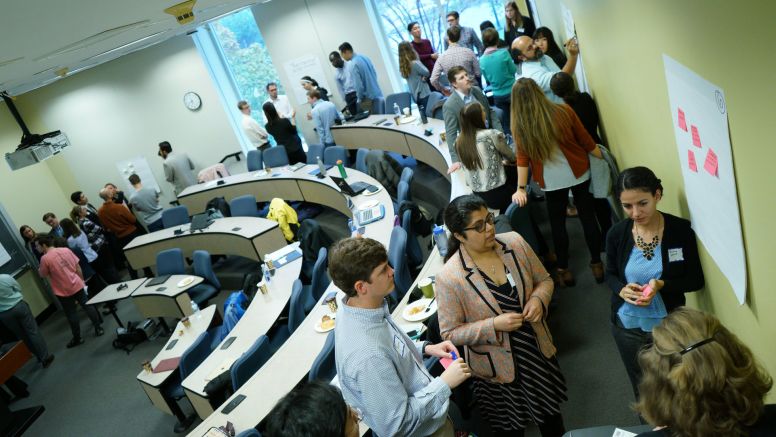 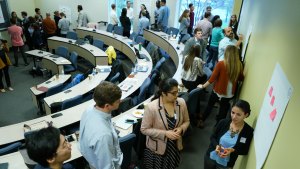 Blockchain has become a buzzword ever since the technology was popularized by Bitcoin and other cryptocurrencies. However, not many people really know what blockchain is or exactly why it’s so revolutionary.

Two leaders from IBM led a workshop to clear up some of the confusion around blockchain and explain its wide variety of uses at UNC Kenan-Flagler’s annual Global Business Conference hosted by the Global Business Center. The event convenes industry and academic leaders to present real global business issues for companies to UNC Kenan-Flagler students, who work in teams to craft and present solutions.

Even though most media coverage of blockchain focuses on the finance industry, any industry can benefit from the technology, they said. In fact, many companies are working to use the technology to increase transparency and efficiency in supply chains and shipping operations.

Blockchain can help deliver four key benefits: a shared ledger, trust, a smart contract and permissions. In the past, ledgers were kept in one place with only one person as the administrator, with a resulting risk of fraud. Now with blockchain, ledgers reside in multiple places, and the blockchain ensures that there is consensus among all of the different ledgers, increasing trust and traceability.

Once information is out, it’s protected cryptographically and only viewable by people who have access. Companies can give permission to specific people they want to have access to that information. Then when multiple companies have joined a blockchain, they can start to build smart contracts by writing rules about how transactions happen. Over time this will build a new ecosystem of work.

Mudd used Chipotle as a hypothetical example for blockchain use in supply chain management. If Chipotle built a blockchain network with its suppliers, every time there was a health concern it could look back at where its spinach or avocados came from and instantly be able to see the point of origin where the tainted food entered its ecosystem. Mudd and Harrison then challenged students at the workshop to use their new knowledge of blockchain to brainstorm how to build a network for a new blockchain platform, “Know Your Supplier.” The platform aims to reduce the amount of time it takes to acquire and maintain a new supplier.

Currently when a company identifies a potential supplier, that supplier must fill out a 200- or 300-question survey that the buyer must then use to verify information. It is time consuming for both parties because suppliers are filling out a different survey for each buyer, and buyers then have to validate information for each supplier by going to the post office, running adverse media searches, and much more.

“Know Your Supplier” would create a network that brings together buyers, suppliers and third-party validators, expediting the process of acquiring a new supplier. Suppliers would only have to complete one profile on the platform and then buyers could receive that information instantaneously without having to wait on the suppliers to fill out a questionnaire. Because the platform needs a large network to be beneficial to both suppliers and buyers, the key challenge is attracting a critical mass of users.

Student groups in the workshop came up with two main approaches to acquiring a critical mass. The first is to place people over profit. Essentially, attract a critical mass and then monetize the platform. The benefit of this method is that companies would become dependent on the platform and would have high switching costs, so when prices for the platform eventually increase, they would be more willing to pay. However, this approach would result in financial losses for the first few years.

The second approach was to target a few key players in an industry and hope that their influence would require other buyers and suppliers in the industry to join the platform. Most companies have chief procurement officers (CPOs) and in the case of IBM, its CPO has relationships with other companies’ CPOs and could use those connections to draw in users, building a critical mass.

As companies are becoming more interested in blockchain powered platforms and systems, Harrison issued a word of advice. “If someone is putting value into a network, they need to get the same or more value out of it or they won’t want to play.”