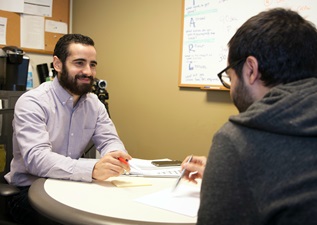 Many MBA students enter business school with a goal to land a job at one of the top consulting firms in the U.S. Applicants spend months preparing for the rigorous and highly competitive recruiting process, practicing cases similar to the ones they will be asked to solve during interviews.

At most schools, students often prefer to prepare on their own. With scores of talented students vying for the same opening at a top firm, many believe that prepping with peers equates to helping the competition.

But UNC Kenan-Flagler isn’t “most schools.”

The collaborative culture here contradicts the notion that helping your competition hinders your own chances of landing a consulting role, says Phil Matta (MBA ’16).

Matta came to UNC Kenan-Flagler with his sights set on landing a job in management consulting. He started preparing for the recruiting process a year in advance, often practicing cases with classmates. Some were further along in their preparations, while others lagged a bit – including those who developed an interest in consulting later into their business school journey. As he prepared, he noticed that the study groups were often comprised of students at similar stages of preparation. The well-prepared students practiced with one another, while less-prepared classmates worked together.

But Matta took a “pay-it-forward” approach. He made it a point to practice with as many people as he could, regardless of how prepared they were. While working with a group of peers who were not as far along in their preparation, they pointed out that Matta was helping them, but they weren’t able to help him.

“This is what it’s all about,” he replied. “If I am prepared, then I should pass along that knowledge.”

And helping his classmates does pay off, he says. The more classmates that ace their interviews, the more friends he’ll have in the industry – hopefully at McKinsey & Co., where Matta is headed after graduation.

In one semester alone, Matta helped approximately 40 first-year and 30 second-year MBA students prepare for the consulting interview process. He hopes that his efforts will spark even more interest in consulting, and that his classmates will continue to pay it forward to help fellow Tar Heels be better prepared for case interviews – and fellow students are already putting the plan into action.

“It really boils down to what the UNC Kenan-Flagler culture is all about – helping one another and succeeding collaboratively to reach our goals,” says Matta.