Top CEO and tops at Citizens 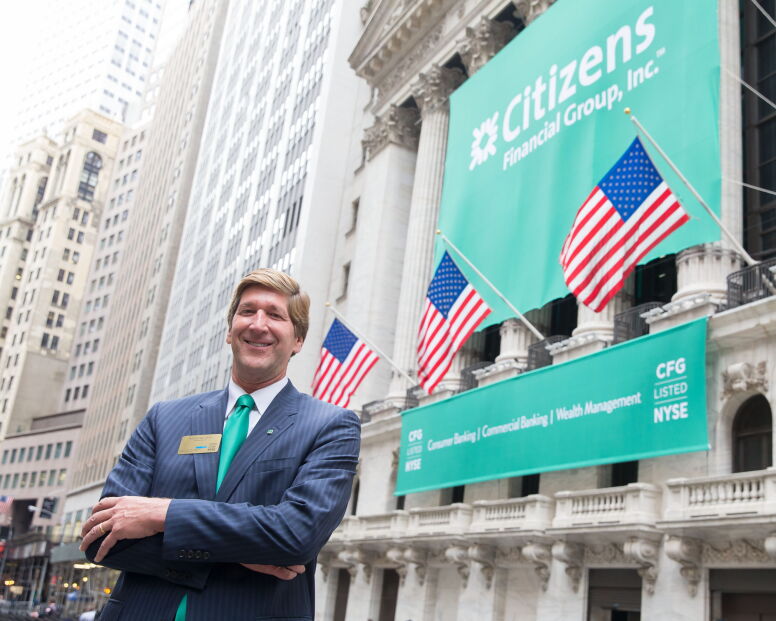 When Bruce Van Saun (MBA ’83) took the helm of Citizens Financial Group in late 2013, the mid-tier U.S. bank was caught in a bind. While Citizens’ competitors had recovered the ground they lost during the retrenchment of the financial crisis five years prior, Rhode Island-based Citizens was falling behind.

Total assets were down 25% from pre-crisis levels and the bank was losing deposit share in Boston and Philadelphia, two key markets. But the bank is in much better shape today, with Van Saun leading the turnaround. He expects return on equity to exceed a target of 14% to 16% in 2022, compared with actual returns of 5% in 2013.

Back then, the bank faced problems stemming from the travails of its parent company, Royal Bank of Scotland, which had been bailed out by the British government in 2008 and forced to shrink assets and cut costs. This meant it had stopped investing in its U.S. operations, to Citizens’ detriment.

“We had fallen behind peers, not kept up with investment in technology and talent, risk management, the product set,” says Van Saun. 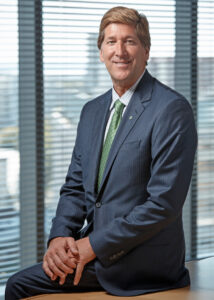 The chief executive faced an uphill battle to turn around the lender. Through this process, he drew on the many lessons on leadership that he learned at UNC Kenan-Flagler Business School. He says his MBA education helped him build his 30-year career in financial services.

“UNC brought me the opportunity to take much broader, higher level finance courses, get exposed to general management courses like strategic planning, leadership courses, courses on technology, organizational behavior, marketing. So really round out the full gamut of knowledge about what makes companies successful.”

Putting this knowledge into action at Citizens, one of the first steps he took to fix the bank’s problems was to remake his executive team to formulate a strategy and align the bank’s leadership around it. He made investments in people at the most senior levels, hiring Beth Johnson (now chief experience officer) and Don McCree (now head of commercial banking).

“Leadership, culture and talent have been key focus areas that have been critical to our success,” says Van Saun.

Van Saun also spun off Citizens from RBS through a well-timed IPO in 2014 that enabled it to focus on its domestic operations and allocate capital based on its strategic priorities.

He then made significant investments in digital technology to turbocharge growth on the consumer side, transforming brick-and-mortar branches from transaction centers into advice centers. 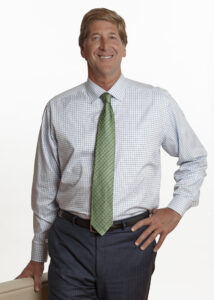 The CEO also launched a point-of-sale tool that enables customers to finance iPhone purchases on the spot in Apple stores or online, leading to other partnerships with merchants including Microsoft and Best Buy.

On top of that, in 2018, Citizens launched a digital-only bank, expanding the customer base beyond geographic constraints.

Meanwhile, Van Saun set about expanding the commercial business by hiring new lending teams in the southeast and in Texas and California, with a view to attracting corporate clients.

“A distinguishing aspect of Citizens is our mindset of continuous improvement. We try to think about how we can extract inefficient use of expense dollars to reinvest in the things for the future that are going to position us for success,” says Van Saun. The company has launched annual efficiency programs that helped revenues grow faster than expenses on a consistent basis, driving improved profitability and returns.

Van Saun has enjoyed much success in his career as well as recognition, including being named banker of the year by American Banker in 2019 and a top CEO by Barron’s in 2022.

He joined Citizens in October 2013 after serving as group finance director at RBS, where he worked closely with CEO Stephen Hester on selling assets to help rescue the bank after the financial meltdown.

“We sold £600 billion of assets. There were about 80,000 people who went with those assets,” says Van Saun. “Stephen used to describe it as, ‘We’re like bomb demolition experts: We have to pull the wires out without having the bomb go off given our thin capital cushion.”

Before that, from 1997 to 2008, he held a number of senior positions at Bank of New York Mellon, including CFO. Earlier in his career he worked at Deutsche Bank, Wasserstein Perella Group and Kidder Peabody & Co.

“I’m always looking for new and interesting things that could take me to the next level and really test me and challenge me,” he says about his career moves.

Throughout his three decades in finance, Van Saun has stayed engaged with UNC Kenan-Flagler, where he met classmate and future wife Katie Watson Van Saun (MBA ’83).

The couple has made generous gifts to their alma mater – including a three-year donation that will support five Distinguished Fellows at the Kenan Institute of Private Enterprise to advance thought leadership around a key “Grand Challenge” that impacts business and society starting in 2023.

“Giving back is a philosophy of life that’s important,” says Van Saun. “The Business School has continued to stay focused on delivering a great education in innovative ways. I’m very impressed with some of the ways they’ve developed online and virtual programs. They’re staying relevant to people in a changing environment.”

On that point, skills that are the foundation for success are changing fairly rapidly, he says.

His advice for the next generation of leaders is: “Create a plan for yourself that’s built around your strengths and then work hard, take some calculated risks, believe in yourself, go to work for good companies with good cultures, select good mentors so you can learn from smart people and be flexible.”

Reflecting on his younger years, he describes growing up in northern New Jersey in the 1960s and 1970s, the ninth generation of Dutch settlers. His grandfather was a top banker and his father was an outstanding athlete, two of his role models in business and life. A family man, Van Saun maintains a good work-life balance and is “extremely organized and disciplined,” finding time to enjoy pursuits outside the world of finance, including golf and tennis.

Fittingly, he describes his own leadership style as empowering, which means hiring the best people and giving them autonomy to get on with the job. He also underscores the importance of portraying strength as a leader, particularly when times are tough.

“What I’ve learned over time, being a banking and investment banking executive for many years is you just need to be very even keeled, very stoical,” says Van Saun.

He has needed to take his own advice at various points in his career, having worked in financial institutions through the 9/11 terrorist attacks, global financial crisis and COVID-19 pandemic.

But he stays upbeat: “It’s always darkest just before the dawn, and people need to draw off your energy and your optimism and confidence that we’ll make it through,” he says. “And when everything’s going great and you’re sailing along, you have to be looking out for the trap doors and seeing around the corners.”

Offering his own foresight, he says he is optimistic about the U.S. economy and the health of the banking sector, noting that consumer deposits are robust and unemployment is low. “Even if there is a recession, I think it will probably be relatively shallow and not broadly painful,” says Van Saun, adding that corporations are well-capitalized. 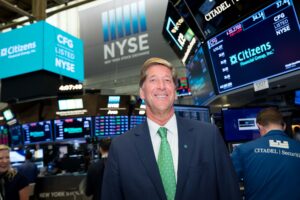 This bodes well for Citizens’ future, but his work at the bank is not done yet. Van Saun is focused on growing household market share following key acquisitions including the east coast retail operations of HSBC and New Jersey-based Investors Bancorp.

He’s also investing further in technology to lower costs and increase speed of service delivery, with a view to competing with larger peers like JPMorgan Chase and Bank of America. In addition, he plans to invest further in Citizens’ wealth management business.

And, on the commercial side, Van Saun intends to expand strategic advisory and equities capabilities, building on the acquisition last year of JMP Group, an investment bank and asset management firm based in San Francisco.

The chief executive says all the building blocks are in place for Citizens to dominate the market for middle-tier clients with revenues of $100 million to $2.5 billion in the years ahead.

“Interestingly, we’re winning jump balls for business against the JPMorgans and the BofAs, which certainly wasn’t the case eight years ago when I got here,” he says. “So I’d say that in short, we have several initiatives to really keep growing and expanding the consumer and corporate bank, and do that in a way that I think is distinctive.”