To prevent overbilling, ask for accountability 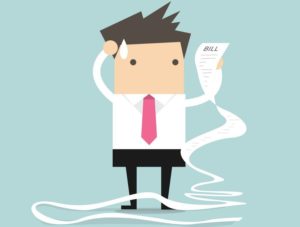 If your answer is yes, you are not alone. Customers are routinely overbilled. For example, one business I was advising wondered if it were being taken advantage of. I suggested they request the contractor to provide a comprehensive unit-report – a breakdown of the total time spent on the task and the cost of the materials provided. They discovered the contractor had set the minimum billable increment of time to half-an-hour, and workers routinely stayed an extra minute past each hour so an additional half-hour could be billed.

Unfortunately, such practices occur more frequently than we might imagine. Lunch hour billing counter to contractual terms, equipment double billing and material double dipping often take place without us even noticing. In the aggregate, these practices harm our bottom line.

A simple nudge
Across seven studies, my coauthor, Maryam Kouchaki of Northwestern, and I investigated using a simple nudge to discourage overbilling. The nudge is easy to implement and involves simply asking for a unit-report – the time spent on each aspect of the job, the cost of materials and equipment or number of units of work done – as opposed to asking for just the total cost of the job.

We reasoned that unit-reporting might make providers mindful of their charges and feel more accountable to customers. Think of accountability as an expectation of being evaluated— the perception that you might have to explain your actions to somebody or feeling that your steps can be traced back to them. We conjectured that such a sense of induced accountability might discourage providers from padding their bills.

We asked college students to do a task that paid per unit of work done. Just like in the real world, where we often have to pay for activities we have no line of sight to or can’t confirm progress (think lawyers), our participants would be paid based on self-reports. They were unaware that we were monitoring them. We asked some participants to self-report the total cost of the job and others (the nudge condition) to report the number of units of work done.

Interestingly, we found that overbilling was significantly lower in the unit-billing condition. But might that simply be because participants were more accurate when asked to think in unit-terms?

Taking it to the real world
How might our nudge fare in the real world? We turned our attention to the auto-repair industry, which is notorious for unethical practices (pick any Better Business Bureau report).

We called a bunch of garages to ostensibly have brake pads replaced and rotors resurfaced. After telling them the car’s make and model, we either asked for unit reporting first (labor plus parts good-faith estimate) or the total estimated cost of the job. According to AutoMD, such a job should have cost around $200. However, we found that the quote was roughly $266 when we use the unit-reporting script compared to $229 when we used cost-reporting.

Clearly, we all know that there are judgment calls in auto-repair work, but a magnitude of $37 difference in estimated prices—simply as a function of a nudge – is noteworthy.

Moving forward
Our research shows that the nudge we designed is easy to use and doesn’t cost anything. And the best part is that it works even in situations where monitoring or surveillance isn’t feasible.

So the next time you are getting repairs done on your car, be sure to first ask how long it will take and how much the parts will cost. Just by virtue of triggering feelings of accountability, overbilling can be curbed.