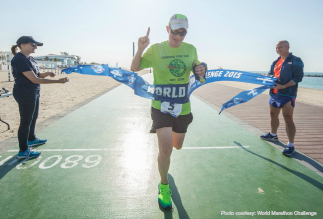 The San Francisco-based consultant set a goal to walk and run the length of the equator – 24,901 miles – in 10 years. To ramp up his mileage, Durbin (BSBA ’05) trained and ran marathons. Now, after becoming the first American to run seven marathons on seven continents in seven days, he’s 184 miles closer to achieving his goal.

The seven races Durbin ran in January were part of the first-ever World Marathon Challenge (WMC), in which runners compete against the clock – and each other – to run nearly 200 miles in seven different countries over the course of a week. He’d learned about the WMC after running a marathon in Antarctica two years ago and signed up with a friend he knew from Australia.

“We all go into it for personal reasons,” says Durbin, the only American among the group of 12 who completed the WMC this year. “For a lot of people, it’s not just about them – it’s to raise money as well.”

Durbin chose to support The V Foundation, a non-profit that funds cancer research. He’s lost two grandparents to cancer and watched his mother and close friends battle it, so supporting research on the disease is near and dear to his heart. And as Durbin prepared to tackle a monumental challenge of his own, he found inspiration in Jim Valvano’s famous 1993 ESPYs speech. 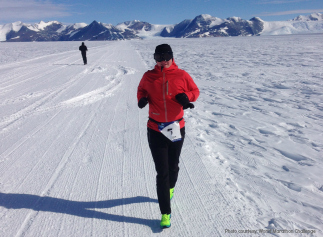 “The things that Jimmy V. talked about in his speech – ‘Don’t give up. Don’t ever give up!’ – was a motto that applied perfectly to what I was going to be doing in the challenge,” says Durbin. “There were definitely going to be points that I was tired, so I knew I was going to find myself saying that a lot.”

But Durbin is no stranger to going the extra mile (or 183) to help others. During his undergrad years at UNC, he served as a student ambassador with the Order of the Bell Tower and co-founded the Carolina Sports Business Club.

“It’s embedded in you at UNC,” he says. “Whether it’s giving back to charity or helping coworkers and fellow alumni, you learn to go above and beyond yourself and think about how you can prepare others for success.”

He credits his UNC Kenan-Flagler experience with helping foster his interest in a career that gives back and helps others. After a stint at Deloitte, Durbin left the corporate world to pursue consulting in the non-profit and social sectors.

“I enjoy knowing that I have an impact,” he says. “I’m using skills learned in the for-profit, corporate world to give back and help non-profits make an impact.”

As he reflects on his WMC experience, Durbin says taking time away from work to complete the challenge was worth every second. 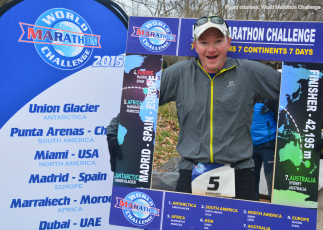 “There were definitely times during the race where I was like, ‘What am I doing here?’” says Durbin, who logged more than 60 hours of flight time in six days during the WMC. “But then you think, everyone at home is watching and following along, and you’ve invested so much time – as well money – into the race. You think, ‘even if I have to crawl, I might as well finish.’”

The experience showed him that every goal – physical or business – is attainable with a good plan and the determination to see it through.

“Everything will probably pale to this in terms of overcoming obstacles,” he says of his WMC experience. “The challenge helped me realize that there’s always a way to figure things out.”

It also sparked a new interest; Durbin now hopes to branch into working in the adventure travel industry.

“Hopefully this experience will enable me to build a career in this space,” he says. “If nothing else,” Durbin adds with a laugh, “I’ll have a really great story for an interview question.”