Studying on campus, then online to become a double Tar Heel 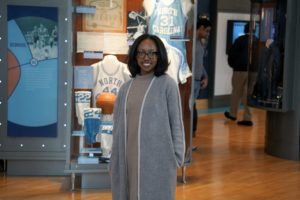 When Tiffanie Johnson (BA ’04, MBA ’18) decided to pursue her MBA, she sought out a program flexible enough to accommodate her desire to continue working at The Washington Post and her busy schedule as the mother of a young child. Her search for the right school led her back to her alma mater.

Johnson graduated from the UNC School of Media and Journalism in 2004 and went on to work for media companies, including National Geographic and The Washington Post.

After she started her MBA@UNC studies, Johnson completely restructured her Washington Post client services team, which handles digital advertising, based on what she has learned in the program. She then went on to accept a new position as director of branded content product and operations for the GET Creative studio, part of USA Today Network.

During her time at The Washington Post, Johnson’s passion for “using technology to drive innovation” sent her to the forefront of the digital media wave and inspired her to spearhead the marketing launch of The Post’s RED team, a group dedicated to ad research, experimentation and development. As her career path made way into the business side of journalism, Johnson knew she needed to return to school to get the foundation she needed to move her career forward.

And what better place, Johnson thought, to earn her MBA than UNC through the online MBA@UNC program? It allows students to get “a world class education and the flexibility to meet the needs of a demanding life,” says Johnson.

“It was a business decision, but it was so personal to me at the same time,” she says.

Johnson met her husband as an undergrad at UNC, just two weeks after the start of her freshman year. They were married at the famous Carolina Inn in Chapel Hill and named their son Dean, which is also the name of beloved Carolina basketball coach Dean Smith.

The flexibility of the program has made a world of difference in allowing Johnson to juggle a demanding career, rigorous studies and young family. She can participate in live classes from wherever she might be – earning her MBA from top-ranked program without interrupting her career or disrupting her family by moving.

Her decision to pursue an MBA just two years after the birth of her son might surprise some, but Johnson says motherhood was the very thing that pushed her into it. “Once I became a mother, I was empowered to feel like I could do anything,” she says.

Johnson appreciates the strong connection she makes with classmates and professors. “There’s a certain perception about online courses,” Johnson said, “but with MBA@UNC you’re forced to be really engaged — you’re right there. There’s no hiding in the back of the class.”

Johnson credits her background working in digital for helping her to adapt quickly and adjust to the out-of-class experience.

She has taken advantage of the quarterly face-to-face immersions in the U.S. and around the world. After attending an immersion in Argentina in 2016 and another in Johannesburg in 2017, Johnson finally made it back to Chapel Hill for the December 2017 immersion.

“You get to network with people all over the world,” she says. “When you see your classmates in person, it’s like seeing your long lost cousins.”

Johnson has already linked what she’s learned in the program with her professional life. “I was able to take something from my leadership class and apply it the next day at work,” she says.

The program also has benefited her career. She says it helped facilitate her transition from The Washington Post into her new role at USA Today Network.

“MBA@UNC helped give me a strong business foundation and equipped me with the tools I need to relentlessly pursue better ways to manage businesses and take risks,” says Johnson. “Of course, MBA@UNC taught me how to manage those risks.”