Eric Olsen’s (MBA ’98) post-grad journey began with an unorthodox decision: He turned down a job with the chairman of Citibank in Mexico to work with his mom.

While pursuing his MBA at UNC Kenan-Flagler, Olsen took advantage of multiple opportunities to work and study abroad. After his first year, he landed a summer internship with the U.S. Agency for International Development in Bolivia promoting foreign direct investments in and exports from the country. While there, Olsen received news that he had received a Fulbright scholarship to spend the next year studying and working in Mexico, where he interned with top executives of Citibank in Mexico.

As a student, Olsen looked for ideas to help grow his mom’s business, Handwriting Without Tears, using the skills and knowledge he acquired through his classes and study groups at UNC Kenan-Flagler.

An occupational therapist, Jan Olsen developed the multi-sensory handwriting curriculum to teach elementary school children how to write in print and cursive. “At her core, my mom is a genius for making things simple,” says Olsen. “The program she created teaches kids in a developmentally based, child-friendly way that makes it easy for them to form letters correctly and helps them learn correct habits at a fast speed.”

After his first semester at UNC Kenan-Flagler, “it became obvious to me that there were people here who could help me with our business,” he says. When Handwriting Without Tears was incorporated in 1998, Jan Olsen was teaching workshops to demonstrate the program and word of mouth was spreading quickly among educators. “My mom was spectacular on stage and was able to share the genius behind the program with people who attended our workshops, and they would spread the word to their schools,” says Olsen. 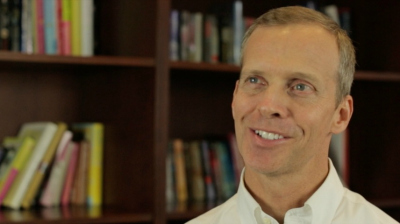 He led two independent study projects, working with about 14 other students to develop and grow his family’s business. “I benefited from UNC Kenan-Flagler professors and students who invested in helping me develop our family business. I had an operations professor who said, ‘You know what we need to do? We need to replicate your mom,’” Olsen recalls.

That insight led to the development of a training program to teach others how to host their own workshops and bring Handwriting Without Tears to new audiences. His independent study projects also led to changes in the company’s marketing and order fulfillment, and identified opportunities to grow the business across the United States. “UNC Kenan-Flagler is a special place for me because my experience really did amazing things for our company,” Olsen says.

In fact, Handwriting Without Tears used the approach developed during one of his independent study projects— finding a partner organization and setting up a workshop to train its teachers, who then share the program with their schools—to expand its business internationally. As the company took off, Olsen declined the post-graduation opportunity with Citibank to focus on growing Handwriting Without Tears’ international customer base. He relocated his family to Costa Rica for a year, excited to immerse his children in another culture and language while he worked on the business. 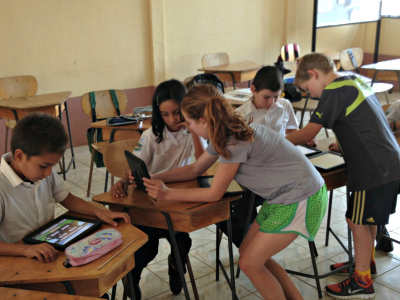 “I got up to AP Spanish 7 in high school, but I wasn’t comfortable saying ‘Como estas,’” says Olsen. Before interning in Bolivia, he took an undergraduate Spanish course at UNC to brush up on his language skills. “The person I worked for at Citibank in Mexico did not speak Spanish, so my language experience was invaluable. I spoke fairly well at that point in time and made it a priority to learn to speak the language without a strange accent when I lived in Bolivia and Mexico.”

That experience reinforced Olsen’s belief in the value and importance of developing strong foreign language skills and inspired him to give back to UNC Kenan-Flagler. “When I was a student at UNC Kenan-Flagler, I received a generous fellowship for my studies and a Fulbright scholarship that funded my experience living and working in Mexico. I knew that there were a lot of alumni who had donated financial resources to enable students like me to have a variety of international experiences, and it was important for me to support the next generation of students in the same way that I had been supported, giving them the opportunity to have some of the experiences that I benefited from.”

Olsen established an award to support the Working Languages immersion program in Costa Rica for UNC Kenan-Flagler Undergraduate Business students. “Eric’s generosity has given our students the incredible opportunity to participate in a three-week language immersion program that exposes them to another culture and enhances their global business knowledge,” says Maria Elena Rodriguez, former director of the Global Business Center’s Working Languages Program.

And in a nice twist of fate, the Handwriting Without Tears program is used not only to teach handwriting, but also to help international students master English-language skills. “We have a Spanish version of our workbooks, but we’ve actually found that many of our customers in Spanish-speaking countries are using the English version of our books to educate the children,” says Olsen.

The company developed an iPad app to give children a new, multi-sensory way to practice properly forming their letters and numbers on a virtual chalkboard. The “Wet-Dry-Try” app has been a huge hit in the United States and abroad.

“It’s really cool when you see a purchase from a school in South America or India and you know that there’s a whole classroom of kids using our app in those countries,” Olsen says with a smile.