The turn to pop-up shops: Is retail dead or just adapting? 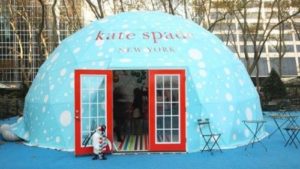 “Retail is dead.” That dire assessment is greatly exaggerated. Many developers, including industry heavy hitter Billy Macklowe, view the highly publicized store closures by retailers such as Macy’s and JCPenney, along with a plethora of empty storefronts across the country, as a sign that retail is dying.

While this appears to be the popular opinion in the media these days, it is not necessarily accurate.

An alternative viewpoint is that retail is simply evolving. Among the most obvious change is the transition from traditional big box retailers to smaller, more mobile pop-up shops. This trend can be seen across the country in places like New York’s Bryant Park or Dicken’s Fair in San Francisco. The pop-up retail scene has been an emerging fad for years, especially during the periods around Halloween and Christmas, but it is rapidly becoming a more permanent fixture in the retail arena outside of traditional seasonal periods.

E-commerce has certainly influenced the retail sector, but the need for experiential retail – where consumers can touch and feel products – remains. As a result, retailers have become more creative with the ways they connect to customers and pop-up shops are a great way to accomplish this.

Pop-up shops provide the flexibility to test products with clients, and can help reinvigorate a brand by piloting new products requiring less commitment than a traditional, long-term lease. Additionally, even high-end, luxury retailers such as Tiffany & Co. are using pop-ups to enhance their sales strategies.

With e-commerce as an alternative, customers are more likely to shop   at convenient locations such as New York’s Grand Central Terminal and Rockefeller Center – both of which Tiffany inhabits for the holiday season and countless others. Furthermore, pop-ups now offer flexible point of sales systems including EMV card readers for mobile devices to compete with the ease of paying at home.

The pop-up fad has not only been important for retailers to connect with customers – it’s also been useful for landlords to connect with tenants. Rents and vacancies have increased throughout New York City and to keep storefronts from being empty, landlords have begun to bend a bit more to the will of the tenant.

Assuming this trend continues, customers will likely begin to gravitate more toward the pop-up retail concept awarding tenants the opportunity to negotiate longer term leases. If not, the beauty of the pop-up is the flexibility it provides – the retailer can vacate and make way for a new tenant or simply moved to an alternate location.