The rise of sustainability accounting 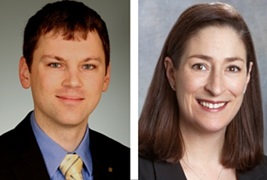 Using hybrid cars, installing energy-efficient LED light bulbs and using electricity generated by a wind farm or solar arrays are good environmental choices for companies. But do they really make a difference?

Shareholders, activists and executives are all looking for ways to accurately and transparently quantify the real environmental impact of business activities – not just whether a company has done something that’s “good for the environment,” but exactly how good (or not) it is and in what ways.

So they’re asking the same people who they’ve traditionally tasked with measuring and assuring their financial numbers are accurate: accountants.

“I do think that we’ll see, and frankly are seeing, more companies tackling tougher sustainability issues,” says Kal Trinkner (BSBA ’08, MAC ’09) a senior in EY’s climate change and sustainability services practice. Trinkner is one of a growing number of accountants, auditors and consultants helping companies figure out ways to assess the environmental impact of their businesses.

The goal is to be able to compare the environmental impacts of different kinds of activities in common terms – just as companies report profits and losses in financial terms – that can be compared across different industries.

Talking about sustainability might seem easy in industries that have traditionally had a major impact on the environment — energy companies, manufacturers, logistics firms and others. But other industries are equally interested in joining the conversation – even those like financial services, which at first glance might seem to have a pretty small environmental footprint.

In 2007, Bank of America (BoA) was a pioneer among financial service institutions when it announced its $20 billion Environmental Business Initiative. The goal was to invest $20 billion into sustainability initiatives — everything from hybrid car financing to wind farms — over a 10-year period. The bank checked the “done” box on the project after just six years.

“When we first set out the $20 billion we didn’t realize all the opportunities that would come to pass,” says Lisa Shpritz (MBA ’05), senior vice president of environmental operations at BoA. “We didn’t realize the interest in the marketplace.”

The bank didn’t anticipate, for example, that hybrid cars would become quite so popular – causing demand for financing to soar – or that the cost of solar power cells would drop dramatically. And BoA didn’t – and couldn’t – know the actual environmental bottom line of its initiative.

In 2013, BoA launched a second-generation initiative, this time committing $50 billion. The money was not a separate pool, but rather was aggregated across all of the company’s business lines. The firm also committed to closing the information gap by figuring out a way to measure the environmental impact of those funds.

For that, it called on EY.

The teams at EY and BoA drew on existing, still evolving guidelines for sustainability accounting, government databases and proprietary tools. Together, they developed a way to estimate the environmental benefit of BoA’s initiative.

Gathering transaction data: This included financial data, the type of project, location and other details. If BoA only financed a portion of the project being measured, it would only claim a proportional amount of environmental benefits.

In addition to energy-focused projects, the bank put its financial muscle behind sustainable business efforts for which the environmental impact is tougher to measure, at least for now. This includes things like credit the bank extends to low-carbon companies, mergers and acquisition advice provided to alternative energy manufacturers, and capital raised through IPOs and green bonds for businesses focused on sustainability.

Shpritz says sustainability is a topic at all levels of the bank; it’s discussed in shareholder meetings, in the board room and often raised by potential employees – especially younger employees.

“This is all part of an emerging trend of responsible business practices and environmental and social governance being a driving force in business,” Shpritz says. “To succeed in the coming years, a company has got to understand this and get it right.”

And these drivers can mean different things to different companies. As Trinkner points out, not all companies think of sustainability the same way. Some use terms such as resiliency, corporate social responsibility and process improvement. And sustainable business efforts might not even be categorized as “green” or “environmentally friendly.”

For instance, a manufacturer seeking to reduce waste in its plants will likely see cost savings from the effort, even as it cuts the amount trash and waste it produces. The decision to reduce waste might not be driven by a sustainability function, but instead by the company’s realization that doing so makes sense financially.

The same is true for risk management. Companies that understand the social and environmental impacts of their business activities are better positioned to manage the risks they face — from controversies over water usage in drought-stricken communities to the potential positive and negative effects of manufacturing a new product, says Trinkner.

Potential employees — especially millennials — are increasingly interested in the company’s sustainability efforts, and that customers also ask about them, Shpritz says.