The remedy for unproductive busyness 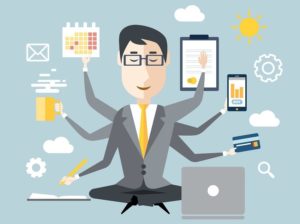 Raise your hand if you feel busy. Keep it up, still, if you think the busyness is hurting your productivity. If your hand is still up, then you should keep on reading.

It’s very easy to succumb to the temptation of staying busy even when it is counterproductive: It is the way our brains are wired. But there is a remedy that we can employ to translate that predisposition into productivity.

Research points to two reasons we often feel busy (but not necessarily productive) — and they are both self-imposed.

People have an aversion to idleness. We have friends who will, by choice, drive miles out of their way to avoid waiting for a few minutes at traffic lights, even if the detour means their journey takes more time. Research suggests that the same applies to work, where many of the things we choose to do are merely justifications to keep ourselves busy.

We have a bias toward action. When faced with uncertainty or a problem, particularly an ambiguous one, we prefer to do something, even if it’s counterproductive and doing nothing is the best course of action.

Consider the case of professional soccer goalies who need to defend against penalty kicks. What is the most effective strategy for stopping the ball? Most of us think that if we were in their shoes, we would be better off jumping to the right or to the left. As it turns out, staying in the center is best. Research has found that goalkeepers who dive to the right stop the ball 12.6 percent of the time and those who dive to the left do only a little better: They stop the ball 14.2 percent of the time. But goalies who don’t move do the best of all: They have a 33.3 percent chance of stopping the ball.

Nonetheless, goalies stay in the center only 6.3 percent of the time. Why? Because it looks and feels better to have missed the ball by diving (an action) in the wrong direction than to have the ignominy of watching the ball go sailing by and never to have moved. The action bias is usually an emotional reaction to the sense that you should do something, even if you don’t know what to do. By contrast, hanging back, observing, and exploring a situation is often the better choice.

The action bias can lead us to jump into developing solutions before we fully understand a problem. In one study we conducted, we found that people feel more productive when they are executing tasks rather than when they are planning them. Especially when under time pressure, they perceived planning as a waste of time — even if it actually leads to better performance than jumping into the task head-first.

Choosing to be busy over real progress can be an easy choice; being productive, by contrast, is much more challenging. What helps? Reminding ourselves that taking the time to reflect can help make us more productive.

In a study we conducted at the tech-support call center at Wipro, a business-process outsourcing company based in Bangalore, India, we found that thinking improves performance. We asked groups of employees going through training to spend the last 15 minutes of each day writing about and reflecting on the lessons they had learned that day. Other employees just kept working at the end of the day for those 15 minutes and did not receive additional training. The result? Over the course of one month, the reflection group increased its performance on the final training test by an average of 22.8 percent more than the control group of trainees who had been working 15 minutes longer per day!

Reflection has such beneficial effects on performance because it makes us more aware of where we are, gives us information about our progress, and lends us the confidence we need to accomplish tasks and goals.

This type of thinking is also beneficial when it takes the form of planning. In one field study, Oriana Bandiera of the London School of Economics and her colleagues had 354 CEOs of listed Indian manufacturing firms record the activities they engaged in at work over the course of a week. The research team identified two types of CEOs. The first engaged in advance planning, interacted primarily with his or her direct reports, and was more likely to have meetings with many people who performed different functions. The second type of CEO was less likely to plan ahead and more likely to meet with outsiders in one-to-one meetings. The most successful were the planners, who were linked to higher firm-level productivity and profitability.

Learning to stay in the center, as goalkeepers should, involves stepping back, allocating time to just think, and only then taking action. Through reflection, we can better understand the actions we are considering and ensure they are the ones that will make us productive. As a mentor once told one of us: “Don’t avoid thinking by being busy.”

This post originally appeared on HBR.org and has been posted with permission. View the original post here.