The path to a purpose-driven career 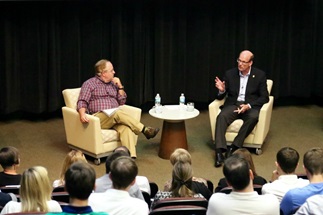 Nearly two billion people around the world live in slum housing, and more than 100 million are homeless – but Habitat for Humanity is determined to change that.

Its vision: to help create a world where everyone has a decent place to live. In 2015 alone, Habitat – which counts nearly 1,400 U.S. affiliates and many more abroad – provided assistance to nearly two million people around the world. And in 2016, the organization was named the No. 1 private homebuilder in the U.S. by Builder magazine.

Habitat for Humanity CEO Jonathan Reckford (BA ’84) is at the helm of it all.

Reckford – a native of Chapel Hill – spoke at UNC Kenan-Flagler Business School as part of the Center for Sustainable Enterprise’s 2016 Perspectives in Sustainability Speaker Series. During his talk, Reckford shared insights on the career journey, leadership and community development.

On the path to a purpose-driven career:

While most would assume that a C-suite executive follows a predetermined path up the corporate hierarchy, Reckford’s career was anything but linear. He never stayed in the same job for more than two years or with the same company for more than four.

He began his career at Goldman Sachs, working long hours in corporate finance. One day, he looked in the mirror and realized he wasn’t living the life he intended and decided to make a change.

Reckford spent a year in Korea doing marketing work for the International Olympic Committee, as well as coaching the Olympic rowing team. He went on to hold management roles with Marriott, The Walt Disney Company, Circuit City and Best Buy.

Then, he pivoted again. Before he became CEO of Habitat for Humanity, Reckford spent two years serving as executive pastor of his local church.

“It’s really hard to get through all the noise and find what really gives you a sense of fulfillment,” he says. “We’re often bombarded with messages about the right resume, titles and next steps in finding the perfect job. Instead, find a place where your gifts and skillset line up with something that matters in the world. Try as many things as you can. Learn as many things as you can. In doing so you’ll find your purpose – and a career that will provide a sense of fulfillment long-term.”

Senior leadership roles come with their own unique sets of challenges. One of the biggest: a lack of feedback.

In many organizations, you often hear “everything’s fine” or “you’re fired” – not much else is communicated in between. At that level, “you see surprisingly little really good, honest conversations around feedback, personal development and growth,” says Reckford.

The best way to combat this issue is to build relationships with others in your organization, from management to entry-level employees. Doing so is sometimes easier said than done – but it’s critical to being an effective leader. Reckford admits he struggled with building these types of relationships at first. “I realized I was only good at managing people like me,” he says.

To effectively lead and manage others, you must first understand that there’s no “one size fits all” solution. Different employees need to be managed in different ways, and what works for you won’t necessarily work for them.

As a manager, it’s easiest to provide your recommendations on how to handle a given scenario – but it’s important to encourage employees to think critically and problem solve on their own, says Reckford. Ask them to share their recommendations, then provide feedback and guidance to help them learn.

On Habitat for Humanity:

Globally, the biggest constraint to Habitat’s expansion is land. Depending on the location, lot costs can be prohibitively expensive – sometimes well over $500,000.

To combat surging property costs in some areas, the organization had to use new development models – such as land trusts and shared equity models, which still provide home ownership and long term affordability to tenants.

In densely populated areas – such as Brooklyn – Habitat builds condominium units to offset higher land costs. While the organization mostly builds traditional single-family homes, it has had to adapt to the unique constraints on space and property value in some locations.

On the importance of community:

Restoring communities isn’t just about building houses. In order to really make a change in an area, the families, schools, businesses and local government need to come together in a concerted effort.

“Community development must happen with families, not for families,” says Reckford.

The rebuilding process can take several years. Once new homes are built, businesses and schools need to be available for residents. Current home owners must embrace the development of a mixed-income community. In areas with high crime rates, local police departments need to allocate resources to serve the new development. After all these facets are in place, families can begin moving into their new homes.

As new residential and business communities emerge, more families and companies will be drawn to the area. A growing community will attract private home builders, who will eventually replace Habitat as the primary housing developer. More families and jobs equate to more local tax revenue, which can be put towards developing schools, parks and other community resources.

If implemented correctly, a community can undergo drastic change. Partnership is key to success. While long-term community improvement begins with homes being built, it is ultimately driven by local residents.