The new buzz on campus 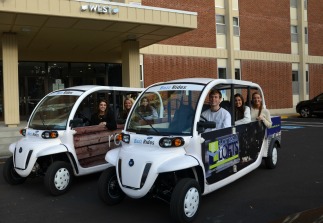 When a trio of undergraduate students signed up for a study abroad course, they expected to learn about global business. What they found was inspiration to start a business of their own.

Used in India since the turn of the century, tuk-tuks provide accessible, inexpensive public transportation. In recent years, motorized open-air vehicles have taken the place of older models that were pulled by hand or powered by bicycle.

As they rode through the streets of New Delhi, the wheels began to turn. This simple mode of transportation – used for hundreds of years in developing economies around the world – seemed like the perfect alternative to the crowded, unpredictable public transportation and expensive cab rides they’d become accustomed to as college students.

“A ride in a New Delhi tuk-tuk was a revelation,” says Skavroneck. “It was exhilarating, affordable and easily accessible – just what Chapel Hill needed.”

And there, halfway around the world from Chapel Hill, the idea for Buzz Rides was born.

Back in the states, Skavroneck, Jones and Draughon mapped out their business plan. Drawing inspiration from their experiences in India, they looked for ways to put a modern spin on the classic transportation   model that would appeal to their primary audience – UNC students.

To mimic the open-air experience of India’s tuk-tuks, they purchased windowless, 100 percent electric, American-made vehicles. The eye-catching vehicles were unique, unlike anything Chapel Hill had seen – perfect to generate a buzz. 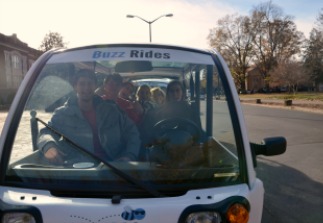 Recognizing that safety and convenience are key concerns for students, they decided to offer secure rides by picking up passengers at locations of their choosing – as opposed to a designated stop – and taking them all the way to their doorsteps at no cost.

“We believe a safe ride home should not be hampered by financial obligations which might prevent the ride from being taken,” says Jones, who has garnered national attention as an advocate for teen safety.

To fund the free rides, the trio designed advertising opportunities to produce a revenue stream. And as part of the target demographic themselves, they were armed with insights on what works – and doesn’t – for brands trying to reach a millennial audience.

“Traditional avenues of advertising, like print and radio, do not resonate with students,” says Jones. “We are barraged with products and brands every day, so companies need to find a way to stand out.”

And Buzz Rides does just that. The company offers advertising packages ranging from small ads to full vehicle wraps, as well as the opportunity to transform a Buzz Rides driver into a brand ambassador for the advertiser. The idea, inspired by tuk-tuk drivers in India who steer passengers to particular stores and restaurants, was the perfect way to help businesses communicate directly with their target demographic.

“Market research shows that students are much more impressionable when messaging is directed through one of their peers,” says Parker. “What better way to position our advertisers’ brands than through our drivers, who interact with every passenger.”

And the branded experience is a truly unique offering for advertisers. After Buzz Rides drivers are briefed on the advertiser’s business, they deliver key brand messages throughout the ride. They’ll even dress the part and wear a branded shirt provided by the client, and advertisers can provide samples or coupons to be handed out to passengers. 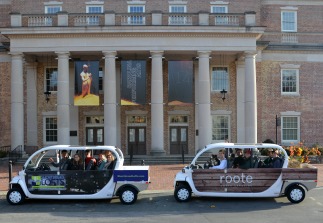 Word spread quickly when Buzz Rides launched in September 2013. “We started out by giving rides to our friends,” says Jones. “Once the vehicles were out on the streets, they drew lots of attention and our ridership grew rapidly.”

To better serve the growing demand, Skavroneck, Jones and Draughon created a mobile app – the perfect solution to appeal to the most connected generation in history.

“The app helps us operate more efficiently, which means we can give more rides,” says Jones. “We can send push notifications to reach customers directly on their phone, and advertisers can use in-app ads to offer food and drink specials at restaurants and bars, businesses we weren’t able to tap into through our existing advertising packages.”

The app also provides valuable data and analytics, including the ability to track popular destinations and gauge the effectiveness of in-app ads, which can be used to help advertisers maximize their return on investment.

Buzz Rides gave over 20,000 safe rides to UNC students during the 2013-2014 academic year, simultaneously cutting down on over 50,000 pounds of CO2 tailpipe emissions thanks to their environmentally-friendly electric vehicles. And with help from their families and campus and community resources, the Buzz Rides team applied for and was awarded a federal Clean Air grant, alongside corporate powerhouses like FedEx.

After an impressive inaugural season in Chapel Hill, Jones, Skavroneck and Draughon have their sights set on expansion. They’re developing a plan to launch Buzz Rides at other universities – including Duke, East Carolina and Vanderbilt – and hoping to find students with the drive and entrepreneurial spirit to make the company a success on other campuses.

And while they’re excited to expand their business, they haven’t forgotten about Chapel Hill. “We hope to further increase our ridership and ensure that UNC students continue to love and enjoy Buzz Rides,” says Jones.