Frankie Kelly (BSBA ’14, MAC ’15) was a standout lacrosse player at Calvert Hall College High School outside Baltimore when he made his first recruiting visit to UNC. He also was considering a few Ivy League schools, but something about Carolina just felt right.

His introduction to UNC Kenan-Flagler Business School in 2008 impressed him as much as the lacrosse team.

As Frankie explains, “Seeing the Kenan-Flagler facilities, sitting in on a class and meeting the school’s outstanding faculty made the decision to attend UNC pretty simple.”  Frankie’s father, Frank Kelly III, recalls the conversation about his son’s college choice. “‘Dad,’ he said, ‘I just can’t see saying no to UNC.’ And, it was because of that business class he sat in on.”

The Kellys are a lacrosse family, and UNC’s storied program was certainly a factor.

Frankie’s uncles David (BA ’89) and Bryan (BA ’91) both played on national championship teams at Carolina. His father, Frank III, was an all-Ivy League player at Cornell. Frankie went on to excel as a face-off specialist for the Tar Heels, and his brother Stephen (BSBA ’17) and cousins Patrick (BS ’16) and Timmy (BA ’19) were all members of the Heels’ 2016 championship team.

In addition to the Kellys’ lacrosse success, they’re equally renowned for their three-generation family business, KELLY, one of the nation’s largest employee benefit administrators, brokers, payroll providers and consultants.  The company was started in 1976 by Frankie’s grandparents Frank Jr. and Janet Kelly in the basement of their Timonium, Maryland home. The Kellys’ four sons were instrumental in the growth of the company.  The brothers are now all in executive positions, with each brother leading an area of the company based upon their specific gifts and talents.

Frankie was an honors student at UNC.  One of the highlights of his time at UNC Kenan-Flagler was the family business coursework he took at the Family Enterprise Center. The classes were a portal for him, giving him a more informed perspective about his family business and offering “definitions to things that we’d been experiencing,” he says. He was eager to share these new insights with his dad and granddad, and they were grateful and receptive.

Frank III was sufficiently intrigued by what he heard from his son that he decided to come to Chapel Hill to experience a family business class firsthand.

“I thought that Frank III was going to jump out of his seat he was so excited to ask questions,” says Biersach. “It was fun to watch the interplay between Frank III and Frankie in the classroom that day.”

After class, Biersach recalls, “Frank III said, ‘This is great. I loved having lunch with students. I loved talking about family business. You guys should do more to let the parents visit and participate’.”

Frank Kelly Jr., Frankie’s grandfather, was a junior at Villanova when his father offered him the opportunity to go into business with him. His father died before it came to be.  But that “family-business seed” was planted, Frank Jr. said. “It took years, but it was in my heart.” 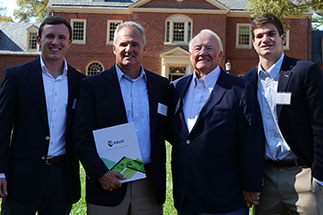 Research by Family Enterprise Center co-founder Steve Miller demonstrates that open and transparent communication in the family is key to long-term success, as it strongly predicts the presence of a shared vision for the business and makes it more likely that next generation leaders will be effective.  On the other hand, a senior generation that exercises unquestioned authority and makes all the rules is even more strongly predictive of the lack of a shared vision. That kind of autocratic leadership style can shut down the open communication that is so necessary to the development of a shared vision for the future and to the development of effective next-generation leaders.

It’s a message that Frank Jr. took to heart long ago.

As his business grew, Frank Jr. began exploring how to prepare to pass the business to the next generation. He saw the perils of “holding on too tight.” He surrounded himself with advisers who counseled him about planning for the future. “You’re used to building and growing a business,” his advisers told him, “and now you’re going to need to get used to your assets going down and the younger generations growing.”

In fact, though, it was exactly what he wanted. But, a solid plan for family governance and communication was required.

The word “governance,” Biersach says, “feels kind of heavy. To many people, it sounds restrictive – putting in controls that we haven’t needed before.”

But governance can be liberating, she says. “It can be a tool that fosters open and transparent communication, clarifies roles and expectations and builds and maintains trust, which is the glue in family-business continuity.”

With the third generation of Kellys now joining KELLY, the family is deeply committed to making sure that every family member is informed, valued, and included. While at UNC Kenan-Flagler, Frankie began the process of actively engaging the firm’s third generation by writing a term paper about preserving the culture of their family business and setting expectations throughout transitions.

About a year later, the Kellys formed a third-generation family council – comprising all first cousins who are 16 and older – and held the first of what are now biannual council meetings.

Several of the cousins convened at a nearby TCBY immediately after that first meeting.  Frankie felt great about the first council meeting. But the reaction from some of his cousins was less certain. Some felt unprepared – as if showing up for an exam for which they had not studied. But, with each successive gathering, interest, engagement, and trust has increased.

The primary objective is to set expectations for those who are planning to come into the business and engage those who aren’t. 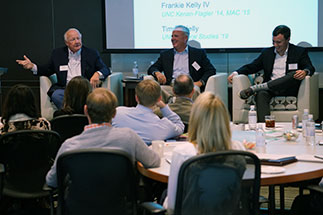 “We really believe in each other’s talents – in the abilities of our cousins and brothers and sisters,” Frankie says, “and so even if you’re not going to be in the business we want your input, we want you to be engaged.”

Frank Jr. echoes that. All third-generation Kellys – all 21 of them – should be included, he says. “We can use the business to support their mission, their goals, their gifting. The message is, ‘Hey; we’re a family whether you’re in the business or not.’”

Timmy Kelly, who plans to attend law school, initially had no interest in participating in the council. “But it was cool to see how engaged everyone was.” It inspired him. He’s now planning to take Kenan-Flagler’s family business courses. “I want to help in any way possible,” adds Timmy.

After Stephen, Frank III’s second son, graduated from UNC, he sent a text to his grandfather: “I just want you to know that I will always remember your father’s legacy and the impact he had on your life.  It is because of his vision and legacy that this business even became a family business. He will always be remembered and will play an instrumental role in motivating me to keep the vision that he shared with you alive.”

Neither Stephen nor Frankie presently works in the family business – “presently,” in their granddad’s view, being the operative word. While they’re presently outside the business, Frank Jr. expects that they’ll one day come in.

“He keeps letting me know that,” Frankie says. “He’s even dropped the ‘Just make sure it’s before I die.’”