The green development of Roosevelt Island 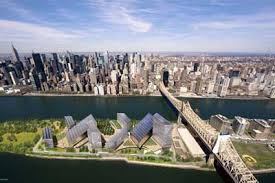 As a native New Yorker, I had the opportunity to watch its vibrant and unique neighborhoods evolve until the time I joined UNC Kenan-Flagler Business School.

When I was a teenager, you simply did not venture to certain areas of Brooklyn and the Bronx that now contain some of the swankiest, most expensive real estate in the city. In between Brooklyn and the Bronx lies Queens, a borough once full of neighborhoods so ethnically diverse that store signs were typically printed in the native language of the local population.

Today’s landscape is quite different with Queens now encompassing one of the trendiest collections of beer gardens and gastropubs in the five boroughs (although I’m slightly biased). However, of all the neighborhoods I’ve visited or lived in, none have changed more drastically than Roosevelt Island.

Roosevelt Island is located on the East River in between Manhattan and Queens. In the 1920s it was home to hospitals and asylums, and the lack of connective infrastructure kept traffic to and from the island to a minimum. In the 1970s it was redeveloped into a middle-class neighborhood with abundant affordable housing.

Today, after its third transformation, Roosevelt Island houses high rises, community gardens and Cornell Tech Campus, one of the most environmentally friendly and energy efficient campuses in the world. With a development budget of around $2 billion, the 12-acre campus features dorms, offices and classroom buildings. It is one of the most innovative and unique collection of buildings in the city, making it a welcome addition to Roosevelt Island.

Cornell plans to achieve net zero efficiency through the implementation of solar panels, geothermal ground source heat pumps, smart building features such as light and plug load monitoring, and energy-efficient facades. The campus sets not only new standards for Roosevelt Island’s tiny, 2-mile strip of land, but for cities around the world.

As a real estate concentrator in UNC Kenan-Flagler’s full-time MBA Program, I have a deep appreciation for the significant evolution of this neighborhood and innovations in green building which made the campus possible. Here MBA students can take courses in environmentally friendly development and become LEED certified through resources offered by the Leonard W. Wood Center for Real Estate Studies. Taking advantage of these resources has been an integral part of my MBA experience and pursuit of a real estate concentration.