Skip to content Skip to Programs Navigation
The business of beer

The business of beer 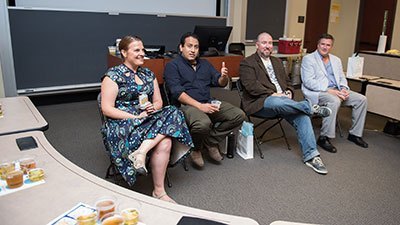 The market for craft beer is brewing up a burgeoning global industry, one that’s doubled its sales this decade and claims annual revenue of more than $80 billion.

Local craft brewers and industry experts shared their entrepreneurial stories at UNC Kenan-Flagler’s MBA Reunion Weekend, opening up about an industry that’s all about crafting unique flavors, combinations and experiences.

Laying down roots in a community

After UNC basketball’s home win against Duke in 1997, Scott Maitland (JD ’95) stood on the balcony of Top of the Hill watching the party on Franklin Street below him, proudly wearing the hat of an entrepreneur.

Instead of running east down the street closer to campus as in the past, the fans gathered at the intersection of Franklin and Columbia Streets. The celebration had moved.

“With our national championship win this year, people have been talking about the role that Top of the Hill played in keeping Chapel Hill unique and different at a time when frankly, the town was struggling,” Maitland says.

Before Top of the Hill marked the “social crossroads” of Chapel Hill, a TGI Fridays almost took over the Franklin-Columbia intersection. But as a second-year UNC law student who had decided to call Chapel Hill home, Maitland took on the challenge of fighting off the chain influence in downtown Chapel Hill.

“Community and uniqueness are what moves me,” says Maitland, founder and proprietor of Top of the Hill Restaurant, Brewery and Distillery and an entrepreneur in residence at UNC Kenan-Flagler. “And it was in fact the anti-homogenization that comes with building something unique to a community that drove me to start Top of the Hill.”

After successfully raising money through crowdfunding, equity and stock purchase agreements, Maitland’s Top of the Hill opened up in 1994 as one of North Carolina’s first microbreweries. It now sells upwards of 2,200 barrels or about 8.7 million ounces of beer each year at the establishment.

From homebrewing to breweries

Sumit Vohra (EMBA ’08) found his passion in homebrewing while working at Cisco Systems from 2001 to 2008.

Vohra, who is chief executive and chief drinking officer of Lonerider Brewing Company, turned his passion into a career opportunity after he landed some brewing equipment at a bargain price. With the means to produce in his hands, Vohra says he wrote a business plan for Raleigh-based Lonerider in UNC Kenan-Flagler’s classrooms.

Meanwhile, Mystery Brewing Company got its start in Hillsborough, North Carolina, after founder and homebrewing enthusiast Erik Myers latched onto an idea for a business model that deviated from industry norms.

“Most people these days don’t want to go out and just drink the same beer all the time. Instead, they want to try what’s new,” Myers says. “So, I thought, ‘what if we just always make the new?’”

While most craft breweries focused on making a flagship beer that’s available year round, Myers wanted to shift the focus by opening a seasonal homemade brewery – one that includes a quarterly rotation of beers to appeal to more consumers.

Although Myers thought it might be difficult to convince investors to take a dive on a business model that had never been tested, Mystery Brewing defied all odds and became the first Kickstarter-funded brewery to open its doors in 2012.

Audra Gaiziunas (OneMBA ’08) runs her own consultancy, Brewed for Her Ledger, to provide accounting, finance and operations strategy guidance to the craft brewing and cider communities. Gaiziunas, who got her start in the industry working at breweries since 2009, noticed an overarching need for more proficiency and better operational infrastructure in the business.

“I made it my mission to help alleviate that issue and minimize the chances for a brewery to open and operate undercapitalized,” Gaiziunas says. “I basically play devil’s advocate every step of the way while breweries start up so that when they open, they’re not going to be strangled for cash.”

Dream big – among all the challenges

With alcohol as one of the largest industries in the world, craft beer is poised to take on a larger share of that dominance. But with so much of craft beer’s appeal rooted in tight-knit communities, reaching new markets poses a unique challenge for business owners.

Competitors have risen quickly and complicated growth opportunities across the industry, oversaturating the market with beer. There are more than 5,300 breweries nationwide – up from less than 2,000 at the start of the decade.

That’s more reason to dream big when it comes to your ventures, Vohra says. The more confident you are, the quicker you’ll be able to move and take advantage of growing markets before they become oversaturated.

Gaiziunas says growth in the craft beer industry is centered around hyperlocal markets now, meaning expansion entails nuanced complications such as arranging for distribution that follows the laws in respective states.

But the industry’s still ripe for opportunity, she says. It’s just about understanding the community around the brewery and staying true to yourself.

“Above all, authenticity is key in this industry,” Gaiziunas says. “You have to be open and transparent about who you are when it comes to your business or else consumers will punish you by just not coming in.”