The beginning of my MBA journey at Carolina 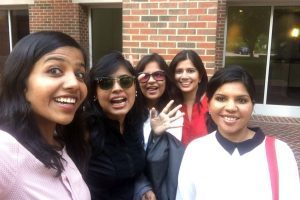 Anita Kannan (MBA ’18) poses with some of her UNC Kenan-Flagler classmates.

I flew across continents from India in July 2016 to begin my MBA journey, but it did not take long to feel at home in Chapel Hill. On the very first day, as soon as I entered the School, I was welcomed with a warm hug and a huge smile from the MBA Program’s Barbara Ann Aversano. I felt like a part of the Tar Heel family even before my classes began!

The Analytical Skills Workshop (ASW) is designed to help us network with our classmates while getting used to studying again. All of the second-year MBA students I had spoken to told me how they became close to their peers during ASW. Being an introvert, I was initially skeptical as I generally take some time to open up and strike up a conversation with people.

During the three weeks of ASW, I realized that all of us students had more in common than I had initially imagined. We were a group of about 200 ambitious people – soon to be joined by nearly 100 more at Orientation – at different points in our careers who decided to earn our MBAs and joined UNC Kenan-Flagler.

Most people had traveled from different states, if not different countries, and everyone was trying to get settled in Chapel Hill. These common factors helped us get to know each other better during ASW, and I understood what my second-years had meant. 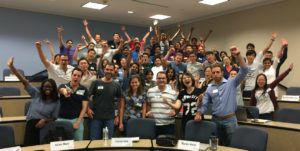 Anita Kannan (MBA ’18) with a group of classmates during Analytical Skills Workshop.

Our professors patiently helped us get accustomed to attending classes and studying again. They even provided extra classes as needed. The ASW classes provided us a glimpse of what we could expect in the first module of the MBA program, gave us the opportunity to brush up on our presentation, business communication and Excel skills, and gave us a head start on preparing for our internship search.

We also attended socials twice a week, which helped us to get to know the people in our class and provided me with the opportunity to meet people from diverse backgrounds – people I wouldn’t have otherwise met!

These three weeks of ASW have been like a movie trailer, and I can’t wait for the story to unfold during the coming two years.