Skip to content Skip to Programs Navigation
Telling her story

When Barack Obama was first running for president, Nancy Johnson (MBA ’09) of Chicago was struck by her father’s desire to see the first Black president get elected. At the time, her father had been diagnosed with stage-four cancer and during the weeks leading up to the election, he grew quite ill. She encouraged him to vote early, which he did.

Johnson talks about how her father lived through a tumultuous American history that included the Depression, World War II, Jim Crow racial segregation laws and the Civil Rights Movement.

“He cast the last ballot of his life for the first Black president,” Johnson says.

Two weeks after Barack Obama was announced as the 44th U.S. President, Johnson’s father passed away. Although she was moved by this historical win and her father’s ability to live to see it, she never believed that America was in a post-racial era. She saw something else on the horizon.

“The bitter divide between Black and white America was consuming me,” says Johnson. “I wanted to explore the issue through character and story.”

Writing her own story

Eventually, she would share the story of Ruth, a highly educated Black woman, and Midnight, a working–class white boy, in her debut novel, “The Kindest Lie.” The book puts a spotlight on institutional racism and its impact on society.

In one important way, this fictional story connects to her real-world experience at UNC Kenan-Flagler Business School. Two white men from the South, two Indian men, a white woman and Johnson were put together on a study team when she joined the Executive MBA Weekend Program.

“This opened my eyes to different ways of seeing the world,” says Johnson. 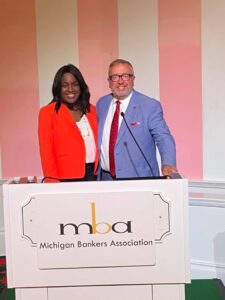 In fact, she recently spoke at two conferences to which she was invited by Rann Paynter (MBA ’09), president and CEO of the Michigan Bankers Association, and one of the two southern men on Johnson’s UNC Kenan-Flagler study team. Indeed, the characters in her novel compared to her friendship with Paynter. They came from different worlds but found common ground. Ruth and Midnight, just like Johnson and Paynter, had a shared sense of humanity and similar interests for studying even if they seemed like they were too different to be friends.

Writing is the way Johnson expresses and shares her ideas about the times in which she lives.

“I’ve always been writing,” she says. “I recently looked back at my childhood memory books and saw that I’d written in my childish penmanship that my favorite activities in kindergarten were reading and writing. I have proof that I’ve been writing since kindergarten!”

She studied journalism and sociology at Northwestern University, and was an award-winning, Emmy-nominated TV journalist for 11 years before she became a “storyteller for business,” helping medical associations, global companies and healthcare nonprofits tell their brand stories, grow revenue and transform lives.

When Johnson finally committed to writing her novel about race and class in the U.S., she knew writing was a good fit.

“I was always telling other people’s stories,” says Johnson. “But now I wanted to tell the stories of my imagination.”

The business of writing

Johnson pursued writing a novel in much the same way she did earning her MBA. She focused on perfecting her skills. For the degree, she sought tutors and leaned on her peers with more experience in business. When she decided to become a novelist, she attended writing workshops and surrounded herself with fellow writers.

“Coming from a creative field and going to business school was a huge leap of faith, stepping into the unknown,” she says. “It was the same with writing a novel.”

Indeed, her journey to business school was similar. When she arrived in a public relations role at the Moffitt Cancer Center in Tampa, Florida, she realized she needed a new skillset to get ahead. That’s when she started researching her executive MBA options. She attended open houses for many programs and visited schools.

“When I sat in on the classes at Kenan-Flagler, I felt this sense of warmth and family,” says Johnson. “I knew I did not have a traditional background, but I knew Kenan-Flagler was a place where I’d be supported.”

Today, Johnson works full-time in corporate communications as senior manager of brand communications and writing at the College of American Pathologists (CAP). She says that the biggest take away from the Weekend Executive MBA Program was a strategic way of thinking that she did not have before business school. Still, Johnson says the people she met and who remain a big part of her life stand out the most.

“You can’t put a price tag on the relationships I built there,” she says.

A case study in dream weaving

Her professors have also taken notice of her admirable work ethic. While she attended the Executive MBA Weekend Program in Chapel Hill on the weekends, she was still working full-time in Tampa. Then, she continued to work a full-time job while writing.

“She has had an amazing career and also has had the courage to chase her dreams,” says Al Segars, PNC Distinguished Professor of Strategy and Entrepreneurship.

Johnson also gained exposure to culture when she attended UNC Kenan-Flagler. As part of the program, she traveled out of the country for the first time, studying in China and Hong Kong for a Global Immersion Elective. It was a life-changing experience that took her out of her comfort zone.

One of the biggest lessons of the trip was the importance of cultural competency – to learn the customs and traditions of potential business partners and colleagues abroad. For example, the person leading the delegation in China was supposed to walk in the room first with the rest of the team following her. Once, Johnson’s team leader failed to be first in line, and it confused their Chinese counterparts. Johnson also had to train herself to remember to use both hands when sharing a business card.

Making the most of time

These lessons have become part of Johnson’s professional character. She holds the dual role of being a guru in corporate communications and a novelist. Now, she is deep in the middle of writing her second novel, “People of Means,” which is about an upper-middle class mom and daughter. The mom came of age during the sit-ins of the 1960s, while the daughter is starting her career at the time of the Rodney King police brutality case. The book is due for release in 2023. Her first novel will be released in paperback on Feb. 1, 2022.

In the little amount of free time she has, Johnson likes to go for walks, go out to dinner with friends, and stay home with Netflix. The pandemic has changed her life just as it has everyone else’s.

Johnson’s book launched during quarantine, so her launch party was virtual. In a way, it was a blessing, she says, because she connected with many more readers when there were no geographical boundaries.

Her book received raves reviews from The New York Times and The Washington Post, among others. One of her most memorable moments was having her book profiled in Entertainment Weekly opposite a story about the Foo Fighters. But the best part of this new life as a novelist is when readers tell Johnson that they connect with her characters and story.

“I have been overwhelmed,” says Johnson, “in the best possible way.”

Read more about Johnson in the Carolina Alumni Review.