Tectonic shifts make an impact on the world stage 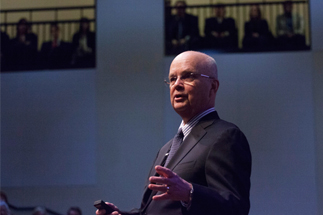 What keeps the former director of the Central Intelligence Agency and National Security Agency up at night?

Michael Hayden answered that question at the annual Weatherspoon Lecture on Feb. 1. The retired four-star general – who worked under three presidential administrations through both terror and cyber-attacks – talked about the threats facing America.

“I’m old enough to have lived in a world more dangerous than today, but I’ve never seen it more complicated,” he told an overflow audience in Koury Auditorium.

He outlined current geopolitical macro trends, analyzed the world’s most pressing hot spots and identified “tectonic” shifts that have made an impact on U.S. foreign relations.

One of the biggest changes in world politics is the power shift away from nation-states.

With power moving from governmental bodies to groups and individuals, the nature of warfare and the source of threats have changed. Malicious activity formerly associated with governments and nation-states are now within reach of groups, gangs and individuals.

“The most urgent threats to your well-being are not the product of malevolent states,” he says. “You don’t need to be a state to be a terrorist, to commit cyberattacks or even to participate in transnational crime.”

Human innovation and interconnectivity are also forces of change – and with them come implicit consequences as can be seen in the rise of transcontinental shipping. “In the age of interconnectivity, we’ve created a greater explosion in human learning and human commerce that we have ever seen,” he says. “At the same time, we also created the global slave trade, global piracy and global epidemics.”

Today’s interconnected digital world means changes can happen faster and with wider reach. The world as we know it, including country borders and government entities, is in flux, he says, and the meaning of citizenship, states and governments are likely to change.

The U.S. faces a world with many geopolitical hot spots, challenges and tensions. North Korea, Pakistan and Russia are increasing their nuclear capabilities, while China is growing at lightning speed. President Donald Trump has a lot on his plate, including ISIS, Al Qaeda, Iran, Turkey and North Korea, says Hayden. “The question is: how will he react?”

Today’s era of post-truth politics has changed the game, says Hayden. “Buckle up – it’s going to be a tough century.”