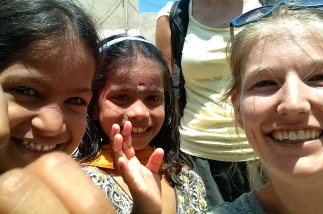 Taylor Mallard (MBA ’15) wants to harness the power of business to change the world – and she’s well on her way to doing so.

Business school wasn’t always in the cards for Mallard, who came to UNC as an undergrad with plans to become a math teacher and sports coach. But studying abroad in New Zealand opened her eyes to the power and beauty of the planet, so she changed her focus and earned a degree in environmental studies.

After graduation, Mallard moved to Montana and took a marketing position with Oboz Footwear, an outdoor company with sustainability and corporate responsibility initiatives embedded into its business operations. There she began understand the impact business can have on the world.

“Business holds so much power to make a difference,” Mallard says.

And while business school wasn’t part of her original plan, she realized that it would not only further her education but also hone her leadership skills, increasing her ability to impart change.

UNC Kenan-Flagler’s tightknit community drew Mallard back to Carolina for her MBA. “I went to UNC as an undergrad, so I understood what it means to be a Tar Heel,” she says. “I love the community and culture here and wanted to get more of that with my second degree.” 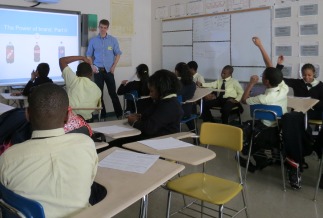 Mallard wasted no time diving into community service and sustainability initiatives and even launched a few of her own. During her first year in the full-time MBA Program, the Community Service Club leaders challenged members to come up with ideas to build upon the School’s existing relationship with Durham’s Global Scholars Academy (GSA).

Mallard and classmate Sean Tracy (MBA ’15) rose to the challenge and co-founded The Global Scholars Academy Startup Challenge, a program that empowers kids by providing an interesting way to learn about business and entrepreneurship through practical applications.

They drew on the expertise of friends with prior teaching experience to develop the curriculum – loosely based on the TV show “Shark Tank” – and recruited classmates to teach weekly workshops for GSA students. Mallard, who attended every lesson to help as a teaching assistant, found the experience especially rewarding because it combined many of her interests – teaching, coaching, teamwork and community service – and further developed her leadership skills.

During her second year in the MBA Program, Mallard served as a student representative on the Business Cares committee. The initiative uses the School’s core competencies – such as marketing – to help meet the strategic business needs of its three nonprofit partner organizations in the community, provides volunteers for service projects and assists with fundraising. 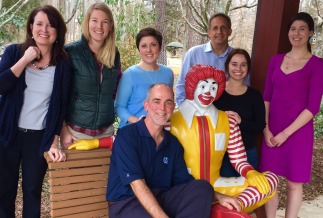 “Business Cares is building a sense of community through service,” says Mallard. “Being a part of this team has allowed me to help shape the future of how UNC Kenan-Flagler serves the community.”

These experiences reinforced Mallard’s belief that applying business practices can make a difference in the world – but many social impact organizations don’t have the financial resources hire professionals with business expertise. As a result, MBA students interested in working for such organizations often face the choice of taking an unpaid internship – which, for most, is simply not feasible – or interning elsewhere. But she was determined to change that.

Mallard was a driving force behind the creation of the UNC Kenan-Flagler Social Impact Summer Grants (SISG) program, which provides financial support to students who choose to accept summer internships related to social impact. The grants will initially be funded through student-led initiatives and fundraisers, but the long-term plan is to set up an endowment to provide a permanent source of funding.

“I’ve really enjoyed seeing a problem, finding a solution, and trying to get people’s support,” she says. “With SISG, our student team – with the help of UNC Kenan-Flagler staff and faculty – took the initiative to make it happen this year.”

And while Mallard’s efforts are making it possible for UNC Kenan-Flagler students to have a boarder, far-reaching influence on the community, she says those who helped champion the initiatives deserve just as much recognition.

“A lot of times, the top-level leader gets credit for things that the team actually makes happen. In my opinion, the number twos don’t get enough credit,” she says.

“In 2013-14, my team of GSA Startup Challenge teachers – Jeff Henriod, Joanna Furgiuele, Alex Pearson, Brian Solomon, and Jason Saunders – put in a ton of work to make it happen. In 2014-15, the effort was led by Jeff and Liz Sypher,” says Mallard. “My community service team – Jeff, Blake Ervin, Najee Johnson, Jessie Lunk and Anuj Gupta – put in a ton of work as well. They also had a team of first-year MBA students working with them to make things happen, the strongest of which are taking over the leadership positions of their respective teams.” 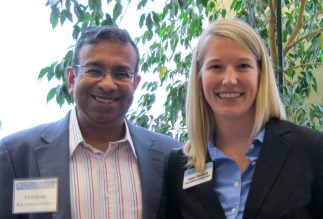 Mallard also credits the UNC Kenan-Flagler community with shaping her into a sustainable entrepreneur and successful leader.

“What UNC Kenan-Flagler has done for me is hard to put into words because it has been so vast,” she says. “The people I have met along the way have inspired me and given me so much support.”

Mallard will join Burt’s Bees as an associate marketing manager after graduation. “I’m excited to work for Burt’s Bees because their corporate philosophy aligns well with my own personal values. They are committed to benefiting the ‘greater good’ by considering the triple bottom line – people, planet, profit,” she says. “I look forward to doing what I can to harness the power of business to make an impact there.”