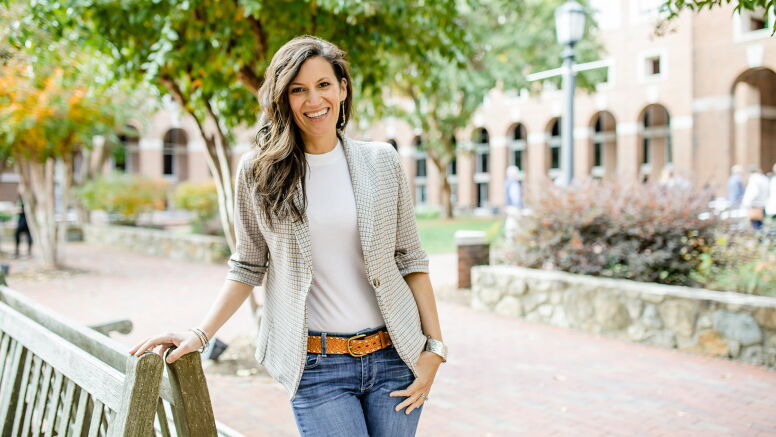 As workplaces undergo dramatic transformation, people expect leaders to demonstrate empathy and commit to diversity, equity and inclusion. Parker Wilson (MBA ’11) is the portrait of leadership for this new normal at work.

She is director of client development at Dualboot Partners, a global software development company committed to building and growing businesses across a variety of industries.

“Leadership is first and foremost relational. It is all about people,” said Wilson at the 2022 Carolina Women in Business Conference at UNC Kenan-Flagler Business School.

“It is inclusive. Leadership means involving every person around us regardless of role, regardless of background. It is selfless. I am unbelievably grateful to be part of a company where our job is to walk in the room every day and ask how we can help the founders next to us. Leadership is connected, alongside others, teams. And leadership is intentional. It needs to be focused.”

The road to being a leader – and her journey to UNC – began at a young age.

Both parents attended the University, and her grandfather, a fierce Tar Heel fan, often pulled her out of school to go to basketball and football games.

“I have a long-standing tradition of bleeding light blue,” says Wilson.

Indeed, Wilson and her husband, Thomas Wilson (BSBA ’04, MAC ’05) drove 27 hours round trip to the 2022 NCAA finals in New Orleans to support the Tar Heels. “We are crazy people,” she says.

Even before she knew what an MBA degree was, she felt drawn to UNC Kenan-Flagler. When she was 6, Wilson asked for a business suit for Christmas. When she was 10, she told her grandfather she wanted to go to business school at Carolina.

“I didn’t know what an MBA was. I just knew that I wanted to study business,” says Wilson. “I had seen it play out in real life.”

Her grandfather’s incredible story of resilience inspired her. Wilson’s grandfather grew up in an orphanage in Lexington, North Carolina, leaving at 18 with no more than $20 and a little hope. He went on to start a small, mail-order catalog company with one brick-and-mortar location in their hometown.

Wilson loved to play business with her granddad. Every Saturday morning, he took her – with a little briefcase and cash box in hand – to his office. There, he lined up coins and taught Wilson the value of each.

“I just thought it was the coolest,” says Wilson.

These childhood memories carried her into the real world, where she worked in marketing after graduating from Baylor University with a BA in French and minor in fashion merchandising.

When Wilson was ready to earn an MBA, UNC Kenan-Flagler was the obvious choice.

“I saw an aspect of the School that I didn’t see in any other environment, which was full team collaboration,” says Wilson. “A lot of the other schools I visited were about how good you could be at your skill set and how can you be the one rising to the top, which can create a competitive environment.”

Like any leader, Wilson had challenges to surmount. For starters, she almost did not stay at business school.

“As much as I loved the team environment at Carolina, I still felt like I did not belong,” says Wilson. “I was surrounded by people who rocked the business suit pursuing the I-banker route, knowing that they wanted to be in commercial real estate, understanding what it looks like to build some insane statistical analysis, modeling pro formas, magical words that I could barely put together. I didn’t know where I fit in that mix.”

Proving Carolina was unlike other places, four of Wilson’s professors stepped forward. In particular, then-professor Doug Shackelford (BSBA ’80) invited Wilson into his office for what she calls a “come-to-Jesus conversation” about his own upbringing, what he studied and what mattered to him. In his story, Wilson saw herself as belonging at business school.

In addition, Valarie Zeithaml and J.B. Steenkamp, marketing professors, and Alison Fragale, an organizational behavior professor, reached out and made Wilson realize “to some extent, all of us are kind of putting up a façade to figure out where we’re going to sit.”

Soon after, Wilson hunkered down for her first round of finals – days ahead of her wedding. She took five finals in four days, then headed to Raleigh on Thursday night, had a rehearsal dinner on Friday and wed on Saturday. It was fall break, so she and her husband managed a honeymoon, too.

In this period, she recognized the strength of the Carolina community. “If you miss a week of classes in an MBA program, you might as well miss a month,” she says. “My study team did not let me miss a beat. They picked up my side of the group work. When I got back, they got me fully caught up. They took handwritten notes, put them in my locker like a roadmap for what I needed to catch up on. They completely swooped in. It was unreal. I had known these people for like a second.”

The people won her over, and the opportunities she embraced at UNC Kenan-Flagler enhanced her leadership in ways big and small. She recalls unique consulting projects, including one in Cape Town, South Africa and another in Nairobi, Kenya. Wilson adapted her skills to the situation and gave her new perspectives on which to draw when problem solving.

Launching the next phase

After business school, she brought this experience to her position on the operations team at Lululemon, then a burgeoning startup.

“We talked a lot about the fact that Lululemon was kind of the awkward teenager, where you know, your head is above the clouds,” says Wilson. “You’re seeing all these things, but your body is waving around gangly, not yet growing into itself. We were playing catch up but also ahead of the game in many ways.”

It was a profound experience for someone who grew up interested in entrepreneurship. She left Lululemon convinced that teams are at the core of business success. “That company was built on the hearts of people,” she says. “Our HR department was actually called ‘people potential.’”

She went on to work as a consultant to startups, then caught the tech bug and pursued investors for a business idea: a technology that would enable startups to have the infrastructure necessary to launch a business. 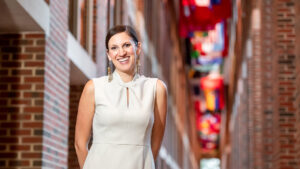 She met the co-founder of Dualboot Partners, which provides on-demand product design and software engineering to companies in varied stages, from early days to Fortune 500 growth. While the co-founder rejected her idea, he provided feedback and opened his Rolodex to Wilson. While working on the beta version of her product, she continued to consult startups and found fulfilment in seeing others grow big ideas. Then, in 2021, the Dualboot co-founder offered her a job at the company. She jumped at the chance.

“I feel like I landed in the place that I’ve tried to find for 17 years,” she says.

Wilson promotes founders from underrepresented groups who might not have access to ecosystems, where the money is flowing. For many, like her grandfather, “friends and family rounds” are difficult to source. This is where Wilson plays connector, matching individuals and resources to see businesses flourish.

Wilson often returns to UNC Kenan-Flagler to give back and re-charge her Tar Heel passion.

She serves on the Next Generation Committee of the Board of Advisors and is a member of 100 Women, which she says “has her whole heart.” In addition, she mentors a female athlete as part of FORevHER Tar Heels.

Her grandfather gave back to the community that served him through the creation of a domestic violence shelter and a library at a community college.

“He said, ‘Before you have the financial means to give, you give whatever you have,’” says Wilson. “Most of the time that is your time. And I think that UNC is a fundamental part of the community that built who I am, and so I want to contribute to it.”

From her home base in Wilmington, North Carolina, Wilson is mom to three young children: a daughter and twin boys. She and her husband spend much of their time chasing the kids outdoors, she says, and enjoys the beach, the mountains and all of North Carolina’s splendor.

In every role she holds, Wilson brings with her a piece of UNC Kenan-Flagler and the Carolina approach to leadership.

“There are 15,000 books in circulation right now about the topic of leadership,” says Wilson. “Clearly, we’re all trying to figure out what ‘leadership’ is. UNC figured it out a long time ago. It’s just recognizing the heart of a person and building a program around human beings.”