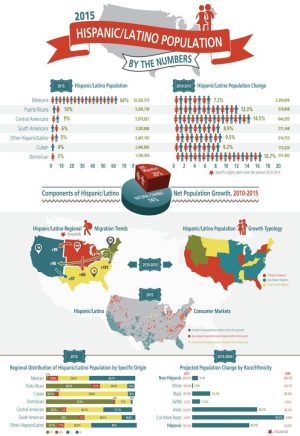 Demographic shifts coincide with changes in consumer buying behaviors – and tapping the power of these up-and-coming consumers can position firms for early success in a booming market.

Hispanics and Latinos are rapidly reshaping U.S. demography, representing 18 percent of the nation’s population and growing at a rate that’s outpacing total U.S. population growth. With this rapid growth, their buying power has also become impressive – to the tune of an estimated $1.5 trillion in 2015.

Successfully tapping this emergent market hinges on C-store owners’ understanding of the diversity that exists within the Hispanic/Latino population and their ability to customize their mix of products and services to align with specific consumer tastes and preferences in their local markets.

Both international and domestic migration patterns have characterized the growth of the U.S. Hispanic and Latino populations and the unique markets that have developed.

The origins of U.S. Hispanics and Latinos are unique and broad, spanning continents and nations alike. They include backgrounds from Mexico, Puerto Rico, Central America, South America, Cuba, the Dominican Republic and more. C–store owners must understand that where Hispanics and Latinos live in the U.S. is strongly influenced by their country of origin, because each group enters the U.S. with different cultural orientations and consumer tastes.

Given the strong and deeply-rooted family orientation in Hispanic and Latino culture, C-store owners should make their stores true shopping destinations. They must think beyond the scope of the traditional mix, not just provide healthy food and basic household items. Instead, they should align with specific cultural tastes and preferences and provide a range of services that address their basic social and health needs.

C-store owners, in particular, are positioned to create these one-stop venues, which could include beauty salons, barber shops and convenient-care clinic franchises as part of their services offerings, as well as plans for multi-generational fitness parks or playgrounds in the design of future stores.

As the various specific origin groups become more upwardly mobile, Hispanic and Latino buying power will only increase in the years ahead. For C-store owners, making a concerted effort to attract and retain this booming consumer group just makes good business sense.