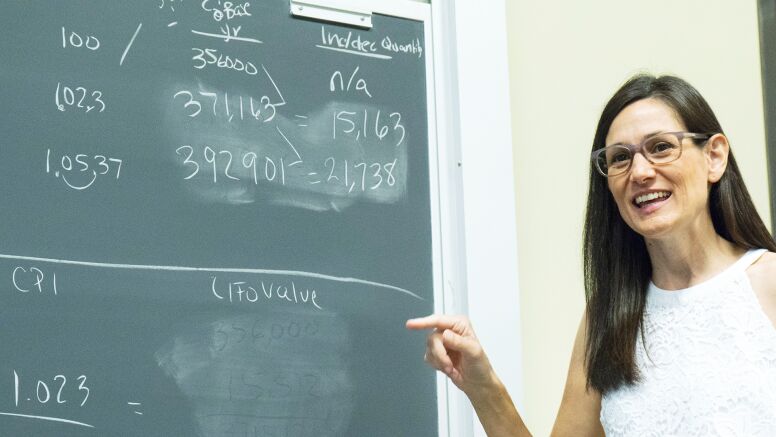 Tanja Snively will talk to anyone, anywhere.

“If I meet you in an elevator, I am going to know where you’re going on vacation before we get off,” says Snively (MAC ’15), an accounting lecturer at UNC Kenan-Flagler Business School.

Her affinity for connecting serves her well when teaching in the MBA@UNC Program, where her students attend online sessions from far-flung destinations. The format suits Snively just fine.

“I really can talk to anyone. A screen makes no difference,” says Snively.

Indeed, MBA@UNC was Snively’s entry into the UNC Kenan-Flagler family. It’s a story Snively loves to tell. She was working as a financial accountant when UNC Kenan-Flagler recruited her husband Chip Snively, a former Intel executive turned finance professor at Indiana University. Asked if he could recommend accounting professors for the then-new online program he, of course, mentioned his wife.

In the end, she was technically hired before her husband, and the couple still jokes about it.

The family faced a crisis shortly after they moved to Chapel Hill. When Snively was returned from a visit to her mother in Houston who was battling breast cancer, she realized she was due for a mammogram. Ten days later, she learned that she too had breast cancer.

Snively feels blessed she learned the diagnosis when and where she did. In Chapel Hill she had access to medical care within a 10-minute ride from her home. It would have taken her hours to get to treatments had her family not moved. After a bilateral mastectomy and chemotherapy, Snively has been cancer free for five years.

Snively feels fortunate, too, she had the support of colleagues at Credit Suisse and UNC Kenan-Flagler, and a supportive partner who helps her thrive at home – as parents of three teenagers –  and at work, where they have embraced academic careers.

And the story of Snively and UNC Kenan-Flagler doesn’t end here. When Professor Ed Blocher took a bad fall and needed a replacement, Snively stepped in to help. She taught the on-campus accounting course for the rest of the semester and loved it.

But to continue in this role, she needed an advanced degree. So she applied to the Master of Accounting Program (MAC) at UNC Kenan-Flagler.

Jana Raedy, associate dean of the MAC Program and associate professor of accounting Ernst & Young Scholar in Accounting, told Snively she was overqualified and would not accept her. In turn, Snively threatened to get her degree at Wake Forest University. The mere suggestion turned the tide. And just like that Snively the professor became Snively the student.

“It almost makes me cry how much the staff cares about and helps students,” says Snively. “I have a unique perspective because some of my colleagues were my teachers, too.”

Today, Snively is a full-time lecturer teaching in both the MAC and MBA@UNC programs.

“Tanja is an extremely committed educator and an excellent accountant,” says Raedy. “These two skills make her incredibly valuable in the classroom. She teaches rigorous courses with grace, good humor and skill. She truly loves teaching more than anyone I know. Her students look up to her and respect her as a teacher and as a mentor. The MAC Program is very, very fortunate to have her in the classroom and the MAC students more so!”

Snively is beloved. When Professor Brad Hendricks presented the Weatherspoon Award for Teaching Excellence in the MAC Program award to Snively, he called her a “rock star” among professors and shared the praise heaped on her by students. She reeled in a second teaching award in 2017 from the graduating MBA@UNC class.

Snively builds relationship with all her students, whether online or on campus. “I get energy from my on-campus students that is awesome,” she says. She is impressed by her online students who are work in high-pressured jobs in a wide range of industries, have families and still find a way to pursue their education from a variety of geographic locations.

“They have perseverance, dedication, and they go above and beyond,” she adds. “It is an amazing population of people who are high achieving.”

What drew this accountant to teaching is watching the progress of students in real time. “I love seeing the aha moment, that transfer of knowledge from my head to theirs and seeing that light go on,” says Snively.

Every now and then she finds herself reflecting on where she’s been and how she arrived at UNC Kenan-Flagler. When she was 21, she was a flight attendant and never imagined she would end up being a professor at one of the world’s leading universities, she says.

“I’m grateful just to be at UNC Kenan-Flagler,” says Snively. “I’m in disbelief that I’m even here.”