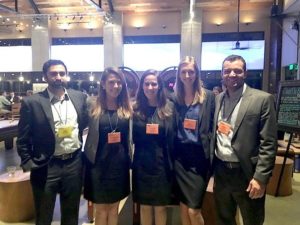 When we started the Deloitte Case Competition (DCC) journey, our team didn’t expect to make it out of the first round. In fact, we had made a list of all the teams that were likely going to beat us. Self-doubt was a consistent theme throughout our entire experience. Without fail, after each presentation the girls would say, “Well, we did our best and we put it all on the table. But there is no way we are moving on.”

Thankfully, Andrey rallied us and continually reminded us that we were awesome and had the potential to be very competitive. However, with the strong competitors we were up against, it was hard to always remain positive! So it was a shock when we not only moved on after the internal round, but got to present in Koury in the second round against Duke.

Competing against Duke added a new level of pressure. In previous rounds, we were mainly concerned with not embarrassing our team – but against Duke, we were representing UNC. For that round in Koury, we presented first and had the opportunity to see each of the other teams – one from UNC and two from Duke – present after we finished. Watching those other teams present was nerve wracking, as each team had great ideas and brilliant presenters. Although we knew we did our best and were proud of our work, we thought our DCC time was over.

When the time to announce the winners came, we were all sitting in a row and holding hands. The judges announced third place first—and it went to our classmates from UNC. At this point, we still thought that perhaps the other two Duke teams had taken first and second. When a Duke team was announced second place, we all stared at each other in disbelief with racing hearts.

Is it really possible that we might get first place?

The surreal feeling of having our team announced as going to represent UNC Kenan-Flagler at the DCC national competition was something that we will all remember for quite a while.

Nationals was an incredible experience. We started out doing a fun Top Chef –style cooking competition with all of the participants. We all got to work with students from other schools to prepare a dish and a cocktail, which we creatively presented to the judges for evaluation. Part of what made the experience so great was the opportunity to meet people from other schools and hear about how their first semester had gone.

The next day we hunkered down in our room, wearing business casual and lacking the same plethora of snacks we had in our rounds at UNC. But we did have access to all of the food at Deloitte University and somehow powered through to our solution and a completed slide deck. This round was different because though we still only had 12 hours to put together the deck, we had the entire evening to prepare for our presentation the next day. This time, we ended up presenting three different times. The final presentation was the top four teams presenting to a room of 250 people – all of the eliminated teams, Deloitte judges, industry experts and representatives from the real-world company that we were discussing. It was intense to say the least. Ultimately, we walked away with fourth place and couldn’t even believe we had made it that far.

Looking back, the thing that made us so successful was our mutual respect and trust in each other. Because we had this strong foundation, we were able to work together well and generate great ideas. Our team attributes a majority of our success to our ability to work as a team, bounce ideas off each other and ask critical questions without anyone getting upset. These were our key strengths. In comparing our experience to other teams we have been on, every member of our DCC team commented that our case competition team was one of the highest functioning groups we have ever been a part of. We wish the same for all future UNC Kenan-Flagler DCC teams, too!

As the competition draws closer, we encourage you to get to know your teammates and start trusting them to do their responsibilities extraordinarily well. Each of you will bring different skills and perspectives to the team, so never be afraid to ask for help! Be willing to fail, but at the end of the day know that you put your best work into your solution and tried your absolute hardest. One team will be selected to represent UNC at the 2017 DCC Nationals, and we cannot wait to hear about all of your success!

Check out our team’s Instagram for pictures from our journey at Nationals!