Start up and never stop 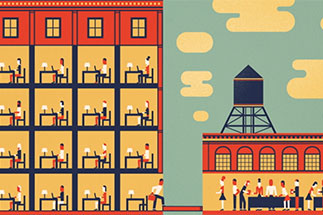 You’ve heard the stories about young workers who take risky, low-paying jobs at high-tech startups and then strike it rich when the companies go public. You’ve also heard about the people who make their careers in startups – working at young companies until they run out of capital, get acquired or go public.

But what role do these workers play in nurturing new companies?

Successful initial public offerings (IPOs) might be critical in creating the next wave of startup workers who then help fuel the creation new businesses, technological innovation and economic growth, according to research by Paige Ouimet, associate professor of finance at UNC Kenan-Flagler.

Ouimet, Tania Babina of Columbia University and Rebecca Zarutskie of the Federal Reserve Board looked at 800 computer and biotech startups and their employees from 1992 to 2006. They teased out patterns in employment mobility based on whether the firms had successful IPOs and share their findings in “Going Entrepreneurial? IPOs and New Firm Creation.”

Their study adds to the research on how startups are formed and what role they play in new company creation, says Ouimet.

“This is one more piece of the pie,” she says. “Probably one of the most important components of a startup are the employees. There shouldn’t be an assumption that all startups can get the employees they want.”

The researchers tapped into state unemployment insurance data collected by the U.S. Census Bureau. Getting access to the data took about four years, required FBI background checks and could only be used in a windowless room in a secure facility. Federal government officials reviewed their research to ensure they released no confidential information.

When the researchers cross-referenced the employer data with other databases of IPOs and entrepreneurial firms, they could track startup employees from one job to the next, following successful and unsuccessful IPOs.

Their findings lend credence to the notion that startup workers are recycled from successful IPOs back into new ventures.

Using an econometric technique they isolated a successful IPO’s impact from the impact of factors associated with successfully completing an IPO – such as firm quality. They found a successful IPO leads to 17.5 percent more of the pre-IPO workers leaving the firm and joining a startup in the following three years – an important change compared to a baseline rate of departures to startups of just under 5 percent.

Because an employee can change jobs for many reasons, the researchers explored three, non-mutually exclusive explanations for why workers from companies that successfully went public are more likely to leave.

Ouimet couldn’t say with certainty why there was a gender difference, but she speculated several factors could be at play.

First, the sample data had twice as many male employees as female employees. With a smaller number of women, there’s simply more statistical noise with which to contend.

Second, Ouimet points out that it’s common for women in their 30s to leave the workforce, at least for a while, to start families.

Third, there might be a difference in the kinds of jobs male and female employees had, which in turn could influence their job opportunities with new startups.

The wealth shock is compelling, but Ouimet points out many factors can be in play when people change jobs.

“We only find evidence for the wealth shock,” she says. “It doesn’t mean that the other two mechanisms aren’t there.”

So does all this matter to anyone who’s not a startup employee or a startup hiring manager?

Ouimet’s study suggests that the slower pace of IPOs in the early 2000s might have hurt startups. After making a number of assumptions, she and her colleagues roughly estimated that the decline in startups explains about 8.2 percent of the missing employment in high-tech startups in the decade that followed.

The bottom line: Successful IPOs produce employees who help the next wave of new tech companies. A downturn in IPOs could depress the startup economy.