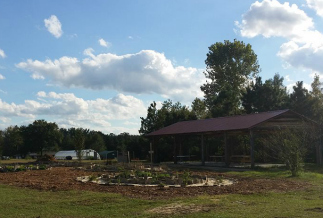 Gwen Locklear used to look longingly out of her office window at the Hawkeye Indian Cultural Center (HICC), imagining the potential of the land surrounding the site’s bucolic 97-acre pond dotted with cypress trees.

She and her team provide wellness, childcare, cultural services and programs to the 4,100 Lumbee Tribal members in Hoke Country, as well as the 30,000 Native American tribal members in surrounding counties and throughout southeastern North Carolina.

Locklear first tried to articulate her vision in a grant application her organization submitted to the U.S. Department of Health and Human Services back in 2010, but was unable to convince them to fund the nonprofit at the time.

“We could see what we wanted, but it was hard for us to put it on paper because we didn’t have the education, knowledge and the tools to do it,” Locklear says.

It wasn’t until Locklear was paired with a team from UNC Kenan-Flagler Business School in the spring of 2011 that she was able to gain traction with the project.

Their recommendations enabled her to reapply for the grant and ultimately receive nearly $1 million dollars in federal funding to develop the center’s water, cultural and land programs using the master plan and sustainable business model created by the UNC Kenan-Flagler STAR team.

“When the STAR team came in, they moved us to the next level,” Locklear says. “We couldn’t have gotten to the point we’re at today without their input and advice.”

Locklear and her staff celebrated the culmination of the three-year project – now called the Sustainable Lifeways Project – with a ribbon-cutting ceremony at the Hawkeye site in September 2015. 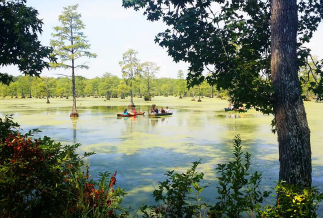 A walking trail – complete with a traditional Native American long house, boat dock with kayaks for rent, picnic area and processing shed and two-acre organic farm were unveiled at the event.

Didow, who was invited to give the keynote address at the celebration, noted that Hawkeye is now the result of remarkable vision, determination and faith by Locklear and others.

“I am convinced Hawkeye’s leadership is strong,” he says, “and its mission to strengthen families, unite people through cultural enrichment, and enhance the self-sufficiency of underserved and distressed communities in Hoke and surrounding counties is both just and sustainable.”

STAR teams and their faculty advisers work on about 25 consulting projects each year for clients that include companies like Boeing, Google and MillerCoors, agencies in state and county N.C. governments, and small non-profits like HICC.

The Hawkeye initiative is one of the more unusual and challenging STAR projects students have tackled in recent years and made an extraordinary impact, says Didow.

The project sowed the seeds for a long-term community economic development partnership between UNC Kenan-Flagler and the nonprofit.

“This is a part of the state where good things to celebrate are perhaps less frequent than elsewhere in North Carolina,” Didow says. “This project has affirmed possibilities and brought hope to a lot of people in this area of Hoke County.”

The STAR students first began work on the project in 2011, making the nearly two-hour drive from Chapel Hill to Hawkeye to meet with Locklear and her team and visit the site, where the land was underutilized. Locklear shared her hopes for using the property in ways that could benefit the Lumbee Tribe, the broader Native American community and others throughout the region.

The five STAR team members were ideal candidates to work on the project, Didow says. 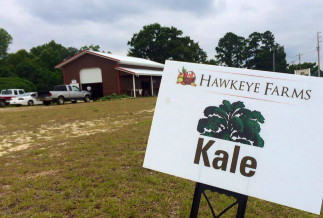 Laura Israel (MBA ’12), then a first-year MBA, had four years of professional design and landscaping experience and offered insights on how to design the site’s walking trails and other landscaped areas.

STAR team leader Will Mendoza (MBA ’12) had a master’s degree in city and regional planning and helped the team meet with community groups and understand their needs.

“I liked working on the Hawkeye project mainly because of the drive they had to materialize their vision,” says Mendoza, now a marketing manager with the global marketing team at WR Grace. “It was inspiring to listen to the leadership of the organization talk about what they wanted the project do for them. The project had great potential, but lots of work was needed to materialize the vision.”

By the end of the semester, the STAR team compiled a 108-page document for Hawkeye with recommendations about how to achieve their goals of increasing visitors, generating unrestricted income revenues and constructing visibility projects like a walking and biking trail. The team also recommended that Hawkeye use the large on-site pond for crawfish farming and expand childcare services for additional capacity and revenue.

“The project required our students to be both creative and analytical, which were the two major challenges on this project,” Didow says. “They had to be creative because we needed to translate Gwen’s vision into reality, and they needed to be analytical because we wanted to grow Hawkeye in a way that would be financially sustainable.”

Most of the team’s recommendations became part of the blueprint for the plan that Hawkeye submitted when it applied again for a U.S. Department of Health and Human Services grant. This time, the grant was accepted and HICC received $955,784 in funding.

A few items the STAR team recommended were tweaked along the way. The basketball court became a picnic shelter area, and the crawfish fishing project was nixed in favor of the organic farm where Hawkeye staff now grows arugula, beets, tomatoes and purple potatoes. The center sells farm produce to the local community and is exploring selling it to local schools and universities, Locklear says.

If it weren’t for the STAR team’s input and business plan, the non-profit would still likely be in the same spot it was back in 2011, says Mary Beth Loucks-Sorrell, executive director of The Rensselaerville Institute’s Community Sparkplugs project. She originally connected Didow and the STAR team with Hawkeye’s Locklear.

“It would have taken the Hawkeye team much, much longer to secure the federal grant,” says Loucks-Sorrell. “The UNC students built such momentum for them and got them to the point where they are today. I think it gave them hope. Since they worked with the STAR team, it’s been a fundamental shift in the way in which they engage their community in health, wellness and cultural well being.” 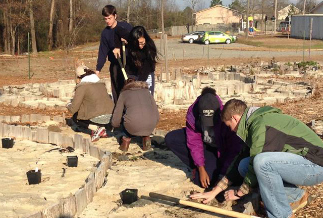 In addition to the STAR team, other groups from UNC-Chapel Hill have gotten involved with the center over the last few years. Hawkeye is now a major engagement site and partner for a number of UNC campus clubs and institutions, including APPLES, the Center for Health Promotion and Disease Prevention and the UNC American Indian Center, says Didow.

While the STAR team members have graduated and moved onto the next phases of their careers, Didow has remained an important adviser to Hawkeye as it implemented the Sustainable Lifeways Project over the last three years. He’s done everything from recommending landscape architects and engineers to dispensing general business advice.

He is already thinking about how the next team of STAR students can help the Hawkeye staff with future projects. An education and training center for the community and an amphitheater are just some of the items being considered for the community that Hawkeye serves.

“Now that we’ve accomplished this, we’re thinking about what we will do next,” Didow says. “I’m pretty sure that there will be at least one – if not several more – STAR projects, and we’re beginning to look into what the future will hold for our partnerships with Hawkeye.”